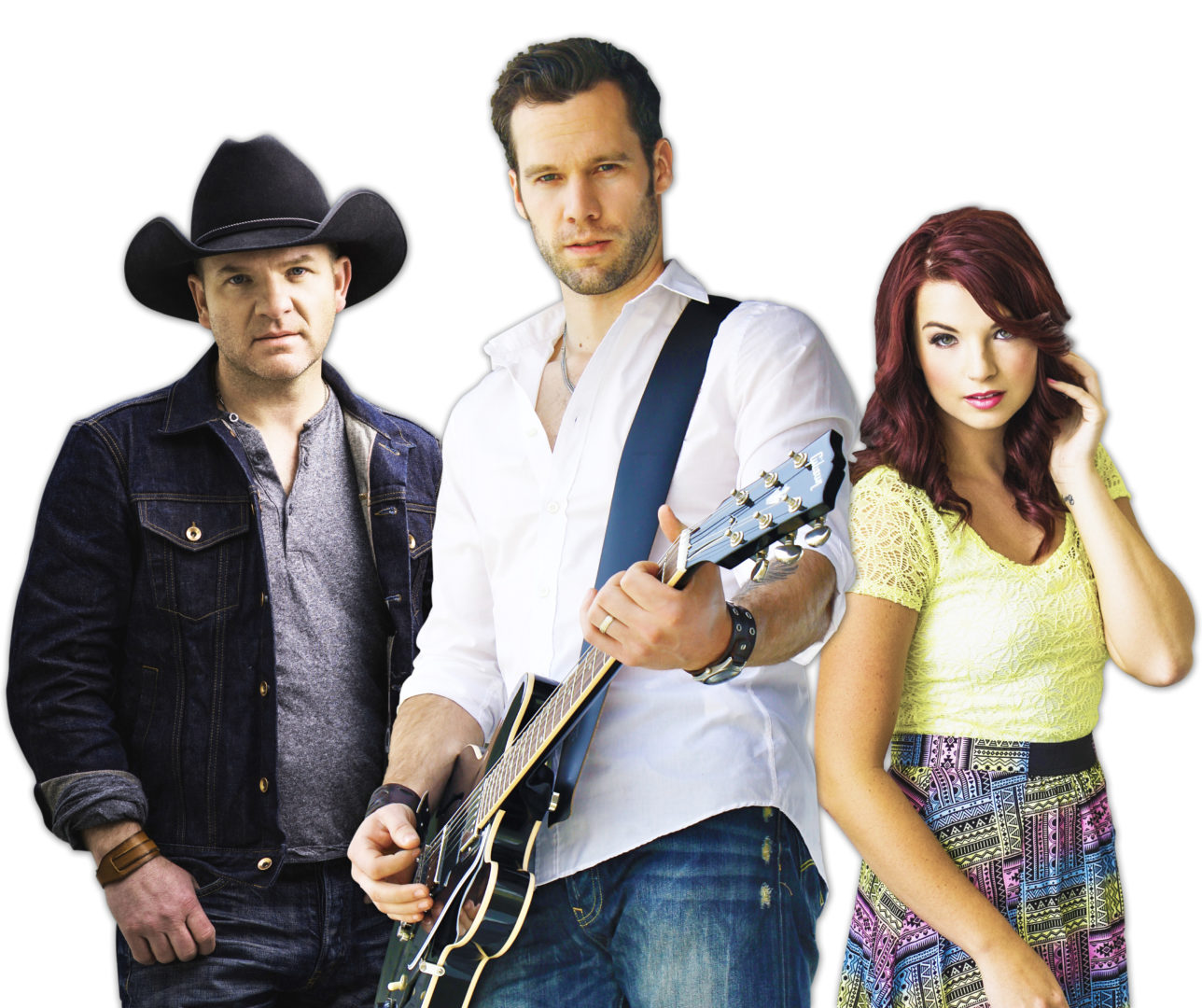 If you are a country music fan, I would bet you have heard of at least one of these award winning Canadian country musicians. If you haven’t, now’s the perfect chance to find out about them, and their upcoming tour.

Chad Brownlee is a well known Canadian country artist who is signed to MDM Recordings Inc, and has such hits as “Listen”, “Smoke In The Rain” and “Fallin’ Over You”. Over the last few years Brownlee has received numerous nominations, including a highly coveted JUNO nomination for Country Album of the Year, as well as Canadian Country Music Association (CCMA) Award nominations for Male Artist of the Year in 2012 & 2013.

Bobby Wills is a growing name in many households who enjoy Country music, and has a reputation for writing from the heart. Also signed to MDM Recordings Inc., he is best known for his signature cowboy hat and diverse musical personality. Some of his well known singles include “Crazy Enough”, “If It Was That Easy”, and his newest single, “Undressed”. As with Chad Brownlee, Bobby has had many nominations including CCMA Male Artist of the Year, and Alberta Country Music Association (ACMA) awards in 2012 and 2013.

Finally, Jess Moskaluke has been taking the Country music world by storm, with a record-breaking single, a new lip gloss line and many awards and nominations along the way. Signed with MDM Recordings Inc, she is rapidly growing as a favourite female artist among many. With hits such as “Good Lovin'”, “Cheap Wine and Cigarettes” and her newest single, “Used”, it’s no wonder she won her first 2014 CCMA for Female Artist of the Year, and two additional nominations for Rising Star of the Year and Interactive Artist of the Year.

These three ultra talented artists are taking it on the road together starting in March as the “When The Lights Go Down Tour”, and if you are able to make one of their many shows, you should! Check the tour dates for more information: http://whenthelightsgodowntour.com/tour-dates/

Below you will find an exciting interview with the three of them. Hope you’re ready to find out lots about these accomplished Canadian musicians.

First off, how did you know you wanted to pursue music as a career path?

Chad Brownlee:Simply put it became my number one passion and all I wanted to do in my spare time. Seeing the reaction of people to the songs I wrote for them made me realize that this was something I wanted to do for a very long time!

Bobby Wills: After a bet in an Australian bar…

Jess Moskaluke: I just loved it so, so much, that I couldn’t really quit it completely. I always thought of it as a hobby until things kinda just started happening. It kinda turned into a career while I wasn’t looking, actually! Haha.

Bobby:Keith Whitley and Garth Brooks were the two that had the biggest impact.

Jess:Shania Twain is a huge one. Probably the biggest.

You have been nominated for CCMA Awards, how did that feel?

Chad: It always feels great to be acknowledged at the CCMA level. There is a lot of talent in Canada right now so to even get a nomination is a feather in the cap!

What has been the biggest highlight in your career, up until now?

Chad:Oh man there have been so many amazing moments its always difficult to narrow it down to one. It would probably have to be last June when I flew across the country to support Tim Hortons Camp Day and played an acoustic show at 4 different Tim’s locations (Halifax, Toronto, Calgary, and Langley). I was up for over 24 hours and capped off the night with a CD release party in Langley! I was on too much of a high to be tired, it was an amazing day filled with so many amazing people, friends, and family. A day I will remember forever!

Bobby:So many cool milestones, I think the first time I heard “Show Some Respect” on Radio… Still probably the biggest moment.

Jess:I think going gold with Cheap Wine and Cigarettes. So many incredible things came from that song and that accomplishment… hopefully I can do it again… soon! Haha.

You are signed with MDM Records Inc along with so many other talented Canadian country artists, is there anyone specific you’d like to tour or work with?

Chad:I would tour or work with any of the artists on the MDM roster and I’m not just saying that. Mike Denney and everyone on the MDM team have done an incredible job in building this label and have a true eye for talent. I’m proud to stand along side everyone that is a part of this music family. This is just the beginning for many of them!

Bobby:I think a Blake Shelton tour would be a riot….

Jess:Definitely not Chad Brownlee or Bobby Wills. That would be AWFUL! 😉 Haha. Really looking forward to that tour… it’s gonna be all kinds of fun. I love Dallas Smith, Brett Kissel, I think it would be a blast to tour with Miranda Lambert, too!

Speaking of Canadian bands/ artists, who are some of your favourites out there?

Chad: I’d have to go with my buddy Dallas Smith who’s got some serious momentum going right now. Also, The Brothers Landreth and The Matinée. Both of those bands exude so much authenticity and have such a great vibe. I wish all of them nothing but success!

Bobby:SO many great acts today!! I’m a big fan of Deric Ruttan, and Dallas Smith is a regular on the stereo at home… I think its possible that we have more “STARS” in Canadian Country Music than we have ever had! Its an exciting time for our genre in Canada.

Jess:Oh, whoops. I jumped the gun. See above!

Speaking of touring, you will be heading out on “The Lights Go Down Tour” in March 2015, what are you most looking forward to on this tour?

Chad:I’m really looking forward to performing a brand new live show. I want to bring fresh songs and visual elements that my fans have yet to see from me. This tour is gonna be fun!!

Jess:I’m most looking forward to seeing some beautiful parts of Canada that I haven’t yet. And being able to share my music with those parts of the country is just the icing on the cake.

Which stop are you most looking forward to on the tour?

Chad: Oh man I can’t answer that cause I’m looking forward to them all! TRULY! There are some great cities on this tour that I have been before and they did not fail to deliver. I am especially exited though to go back to Kelowna where I grew up. I did my first show there last year and the crowd was amazing. Looking forward to seeing everyone there again!

Bobby: The East Coast stops are pretty exciting. We don’t get a ton of chances to get there so that’s a highlight for sure. The fans are AWESOME

Jess: I’m super pumped to bring the show to Regina. It’s the closest show to home that we have on that tour, so I’m counting on Saskatchewan to pack the house and bring the energy!!

When on the road, what are three things you must have with you?

Chad:My guitar, a winter coat (unless it’s summer), and honey (great for the throat on long tours!)

Bobby:a guitar and an Ipad. Im hoping to write a little on the bus, and all my books are on the Ipad… I’m a boring guy. (I may also bring a toothbrush but only if Brownlee does.)

Jess:Cell phone (with charger!!), my Sexton in the City lipgloss, and….hm. Good question! I guess I need a lot more than 3 things. Haha.

During shows, do you strictly perform your original songs, or do you throw in some cover songs? If yes, what is your go-to cover song?

Chad:I like to throw in some cover songs usually. I tend to lean towards the classic rock like “Free Fallin” (Petty), “All Right Now” (Free) and “Come Together” (Free). As well as one of my staple covers “Hard Sun” by Eddie Vedder. I’ve also been known to surprise people with a little Lady Gaga – Poker Face. The reaction of the crowd can be quite entertaining!

Bobby:Mostly originals – But the Brian Adams covers have been known to show up.

Jess:Covers is where I started! I won’t ever be able to totally throw away covers, for sure! One of my all time favourite covers to do is Alone by Heart.

Do you perform small town shows or bigger venues?

Chad:Both! It’s a lot of fun to blow the roof off a major festival, but I also enjoy just sitting down with my guitar in front a small crowd. It allows me to tell more of a story behind the songs and really connect with the audience.

Social media is a big part of the music industry these days. Do you find this an important tool for someone in your position to take advantage of?

Chad:Absolutely. Artists and bands have never had an opportunity like this to connect to their fans before. It’s amazing how instantaneous our communication is today. However, as important as that is I still think live shows and real life artist-to-fan interaction is more valuable than any phone, tablet, or computer screen can bring you.

Bobby:Yup, its a way to stay connected. I’m not real good at it but its fun!

Jess:Big, big biiiiiig part of it. So important to take the time to connect directly and personally with your fans… they’re the ones out there allowing me to make this a career. The least I can do is let them in on my life and share what’s going on, what’s coming up, and ask what they wanna hear!

If you were to give an up & comer in the music industry some advice, what would it be?

Chad:Make sure you’re doing it because you ENJOY it. Joy brings a positive mind set that breads confidence, which then brings success. Throw in a level head and some internal drive and you’ve got yourself a recipe for a long healthy career.

Bobby:Don’t quit…. That’s it, almost everything else will come with time, dedication and effort. As good as you think you are today, if you keep fighting you’ll be better tomorrow… I honestly think that’s 90%.

Jess:Work until you can’t work any harder, then keep working. You gotta love what you do!

Chad:Yes, without you I wouldn’t be here. None of this would be possible without you. I want to keep bringing you music for as long as I possibly can in hopes that it has a positive impact on your lives. I love you all!

Jess:I just freaking love them. But they already know that. 😉 See you guys on the road in March!