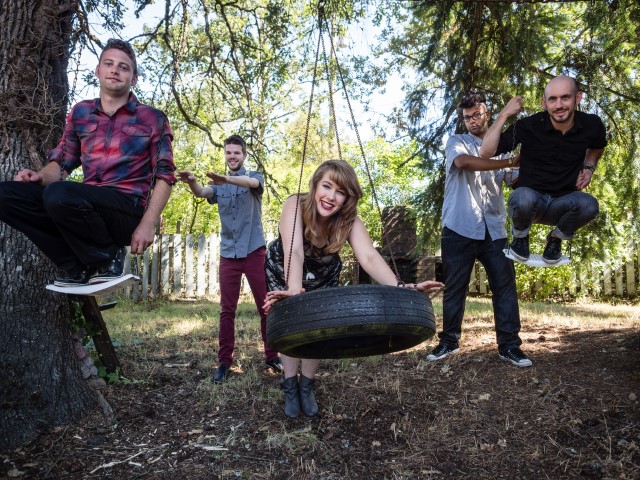 Formed in 2010, Mr. Goshness are a 5 piece pop/rock band from Nanaimo, BC. They’re hot off the release of their latest album A Guide To All Things Twisted and have put up a track from that album for free download.

First off, can you introduce yourself for the readers who haven’t heard your band before?

MG: We are a Canadian Prog Rock Band with theatrical elements, as well as having Metal and pop influences. We are based out of Vancouver Island.

A Guide To All Things Twisted was released in late 2014. What was the writing and recording process like for this album? How did it differ from your last release, Death At The Show?

MG: “Death at the Show” is an EP we made 4 years ago in Vancouver B.C. Tracking for that cd was completed in two sessions that went from 6p.m- 2a.m. We did not have a producer and hadn’t gone through a pre-production stage. Our debut album “A Guide to all Things Twisted” was treated differently. We spent 3 years creating it. From the start of preproduction to the final Mastering. For this project we were fortunate enough to have many talented people involved who made it what it is. We had access to many unique instruments and equipment. We recorded drums bass and rhythm guitar live off the floor at Rique Disque studios along with some other guitar parts and sounds. Ape island sound is where we recorded all of the vocals and tons of organ, keys, and synth parts. Kaliandra even got to play a Theremin part for the last and title track on the album.

The writing of a song for each record always starts with Mark writing the bare bones of the song. This includes lyrics, melodies and a rough draft of what all of the instruments will be playing. With “A Guide to all Things Twisted” each song went through a preproduction process with Mark, Kali and their producer Jim Blair. This is where we would decided to add parts or take them out, based on what each song needed. Multiple lyrics and melodies were also revised, there was a lot of thought put into every track on the record.

MG: The reactions from fans have been overwhelmingly positive and we could not be prouder of how the public has taken it. We are actually waiting for a review that will make fun of us, it’s always interesting to read different opinions. A review that really yanked at our heart strings was from a user on reddit.

We have been getting positive reception from our live performances as well. We recently performed for a very different crowd than we usually play to, we had a hard time telling whether or not the crowd was enjoying us based on their body language. They were staring at us intently throughout the set, no one was speaking or moving for the whole hour. By the end of the set, they were stomping in demand for an encore and were kind enough to speak to us after the show to tell us how they enjoyed the show.

Why did you decide to put Resolutions up for free download for the month of January?

MG: We thought the song was suiting to the time of year as most people’s resolutions start and end in January. The lyrical content is essentially about that notion.

You say Resolutions is about the unrealistic expectations that everyone puts on themselves at the beginning of the year so have you stuck to your New Years resolutions?

MG: We don’t actually make New Years resolutions, we like to achieve positive change through life goals instead. Just like everyone else we sometimes fail to commit to these changes. Mark is still trying to quit his giant kinder eggs addiction.

MG: We don’t plan on touring anytime soon because our fan base doesn’t expand much further than Vancouver. However, we will playing shows on Vancouver Island and possibly Vancouver. We are excited to one day get to the stage where touring would make sense. As our fan base grows, we will be venturing into new territories. Should the opportunity arise where a band with a draw in a certain area gives us an opening slot, we would be thrilled to take part.

MG: We loved the idea of working on a music video with Tim Burton. I don’t think he makes music videos, but his style is perfect for our music. Very dark, theatrical and whimsical.

MG: Some of our favourites are Mother Mother, Said The Whale, Ninjaspy, Metric, Sum 41, The Tea Party and The Zolas.