By Remington Fioraso on January 6, 2015@https://twitter.com/RemingtonFD 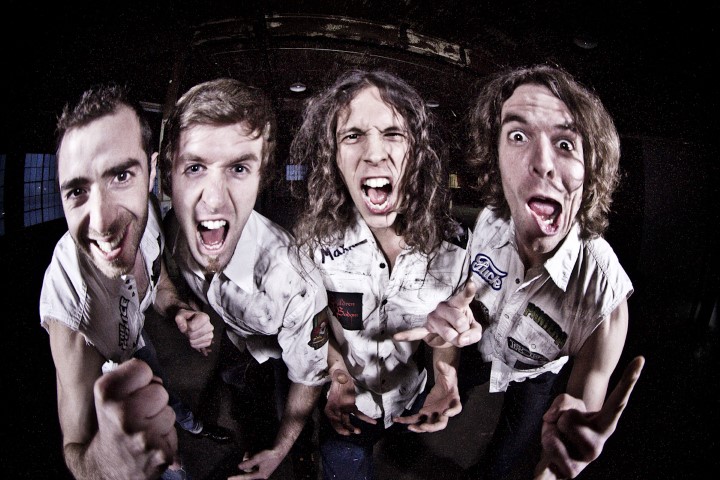 Kolony is a melodic rock metal group from Montreal, Quebec. The band consists of Reno on vocals and rhythm guitar, Maxxx on lead guitar, and backing vocals, Mykaël on bass and backing vocals, and Antony on drums. Kolony released their album “Sledge” on November 14, 2014.

We have a large spectrum of influences. In fact, we all like different kind of stuff so we have influences from The Police to Keep of Kalessin, but mostly it’s around Metallica, Megadeth, a few progressive bands like Dream Theater or Protest the Hero and a little bit of Avenged Sevenfold and Trivium.

I (Max) met Antony a few years ago near Quebec city in an other band named Noisy Souls. We were seeking for a drummer and he just happened to be the perfect candidate. We instantly became good friends !
The band obviously broke a few months later so we decided to start a new project at Montreal, with new members. We met Renô in an audition for a guitar player. He finally took my place as the lead singer (because I was at the beginning) and after a few months (or maybe a year) of gigs with session bass players, Reno met Mykaël in a cover band audition and he asked him if he would like to play with Kolony. He tried, he did the job pretty well, and we kept him in the band as a permanent member.

What was the recording process for your album like?

I used to own a studio a few years ago so we recorded all the guitars and bass tracks with my gear. Next, we reamped them and we did everything else (Drum, vocals, mix, mastering) with Jef Fortin of Badass Studio (Anonymus, Neuraxis, Unexpect and so on). It took approximately 4 months.

What has been the fan reception to “Sledge” so far?

Pretty well ! Everybody seems to understand the purpose of this album, our influences, our concept, our lyrics, our signature. Everything is allright. We keep working at bringing it to as much people as we can.

Although you have been posting lyric videos for the songs on “Sledge,” are there plans for another music video?

Yeah ! We already have one for Echoes (https://www.youtube.com/watch?v=Yg2aixl2tPg) and we will post a Lyric video for Monopoly after tomorrow, January 7.

What can fans expect to see from Kolony in the New Year?

A few new live songs, maybe a new member (Renô thinks about singing only so we will need an other guitar player), a lot of gigs and maybe an eastern Canada/USA tour.

At Canadian Beats, we like to include ‘fun’ questions to help fans get to know you a bit more.

If I talk for ALL the band ? Definitively Protest the Hero and Rush. In my personal opinion, probably Protest The Hero, Kälter, Devin Townsend.

Who has been your favourite musician to have seen played live so far?

Steel Panther… and I’m 100 % serious. These guys are gods :O ! I never seen any other band performing at that level. Also, Keep of Kalessin and Killitorous are «demi-gods» hahaha.

What are your favourite albums?

I can’t answer to that question, it should be illegal. I have too much, but I will say City (Strapping young lad), scene from a memory (Dream Theater), Ubuntu (Kälter), Deflorate (The Black Dahlia Murder), Hangham’s Hims (Sigh), Feel the Steel (Steel Panther) and Jaktens Tid (Finntroll).

Since I’m vegan for a lot of really important reasons, I can’t say «a T-Bone» anymore (damn…), so I will say almost any asian food (Indian, thaï) and central America food (Mexican, Guatemala). Vegan burgers with French fries and a hoegaarden is also a must, also.

South Park. I love how they do not hesitate to criticize everyone by using poop references.

Yes !
1- Follow your dreams because it’s cliché but you only live once !
2- For the same reason, take care of yourself, of the others (people and animals) and of your damn planet !
3- Live, love, learn, fight, change yourself ; change the world !
4- Don’t put your dick in a pencil sharpener !