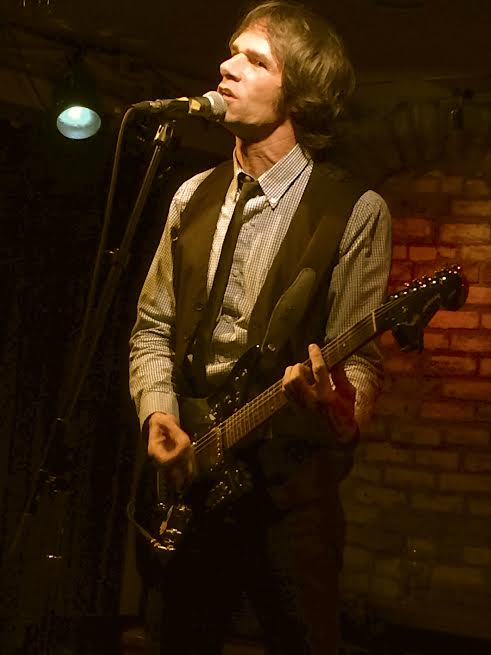 T.C. Folkpunk aka Timothy Cameron is a folk punk artist from Toronto. He recently released his album ‘Lamest Fast Words’, which was impressively recorded live in two hours. He also released four independent CDs which received positive feedback and airplay in Canada and other countries. Want to learn more about T.C.? Check out the Canadian Beats review to his latest album below as well as his social media to keep up on what he’s up to.

You’ve said that you recorded ‘Lamest Fast Words’ in a two hour period. Was that challenging at all? Why did you decide to do it all in one go?

It was less challenging than I expected, actually. I went into the first session prepared to only get some of the songs down, but once I was there, the caffeine kicked in, and I just kept going. My engineer (and de facto co-producer), Dave Misener kept saying, “that was great, let’s go for another!”. I knew I wanted to play it as “live-off-the-floor” as possible, I think constant overdubs wreck the spontaneity of a project. If somebody else wants to spend a week getting the “perfect” snare drum sound, good for them, but I’d die of boredom.

What is your favourite song to perform off of the album? Which song do you think the fans respond the most to?

It varies a bit from gig to gig, some nights a certain song just works better, for no obvious reason. I usually open with I Overheard Somebody Telling Me, and I tend to really slam the opening chords, so it’s a powerful way to start the show. Or at least powerful for just one guy and his guitar. It seems that Windmills has gone over well lately, too. And the “Ernest Borgnine” line in Here Crumbles The Bride usually gets a few laughs.

How does ‘Lamest Fast Words’ compare to your previous releases?

It’s certainly the fastest recording! The previous album, which was just called T.C. Folkpunk, started as a live-off-the-floor thing as well, but then there were a couple of songs that just screamed for drums, so we added them. And once you add drums, then bass isn’t far behind. And then when you have two or three songs with a full band, the other songs sound empty by comparison, so they get the drums and bass thrown on. And then a friend of yours who plays trumpet tells you that if you ever need a horn section, just give him a call… so you do. Clutter is a slippery slope. The album sounds great, and I’m glad I have a “full production” thing out there for people to hear, but the band only ever existed in the studio, so trying to recreate the album live as a solo act was a bit of a challenge. “If you could all imagine this harmonica is really two trumpets, a trombone and two saxophones, that would be great, thanks… and just imagine there’s a grand piano playing descending arpeggios in the third verse, too, that would be lovely…”.

You’ve had many accomplishments over the years, including having one of your songs added to a curriculum in Germany and being invited to play The International Pop Overthrow festival in Liverpool. What did it feel like when these things happened? Do you think these kinds of things will happen again?

When I got the email from the teacher in Germany, asking permission to use the lyrics of American Dream as part of their studies, my son had just been born the day before, so you could say I was a bit distracted. I was dealing with all the “first time parent” madness that was swirling around me. But after a couple of days I thought whoa, my lyrics are being studied on the other side of the world, I’m in league with Dylan and Leonard Cohen! Then I went back to changing diapers for another two years.

Playing at The Cavern Club completely recharged my batteries. There’s something in the water of the Mersey River, the entire city is musical. Every local band I saw at the festival took to the stage and owned it. They had this attitude, “we invented this guitar-driven power-pop stuff, and we do it better than anybody, so f*ck you”. As if they were defending their title, and taking no prisoners. Anyway, I came back home with two gigs at the world’s most famous music venue under my belt, so it was like a stamp of approval from the gods of music or something. I’d love to go back, they keep asking me every year, but schedules always conflict. Hopefully I’ll make it over there for 2015, though.

How would you describe your sound to someone who may have not listened to your music before? Would you suggest a song they should listen to first?

Well, since the pioneer of this “one guy with an electric guitar” stuff was Billy Bragg, I usually start by dropping his name. If that doesn’t work, then I might say “imagine Billie Joe from Green Day without the other two guys”. If I had to suggest a particular song these days, it would probably be I Overheard Somebody Telling Me, although my songwriting can be a bit all over the map as far as styles are concerned, so it’s hard for me to pick just one.

How have your influences in music such as The Beatles, Bob Dylan, and Green Day affected the way you write music?

I try to come up with catchy stuff that the listener will still be humming after the gig or the album has finished. Earworms, basically, although there are clever earworms and annoyingly dumb earworms. I always try to come up with clever ones, and my favourite Beatles songs are loaded with those.

I first discovered Dylan when I was 15, and the first album I heard was Bringing It All Back Home, which was his first electric album, and the beginning of his full-on surrealism period. His lyrics floored me. It was like I was suddenly given permission to write lyrics that would stand on their own merits, and nothing was too weird to attempt.

Green Day, The Clash and The Ramones instilled a sort of punk urgency in my approach. A song doesn’t have to be a twenty minute mini-opera to get the point across. I prefer to be direct and economical, and make sure a song doesn’t wear out its welcome before it’s finished.

I spent a big chunk of 2014 working on a film, an unromantic comedy titled Mancation Nation. At first I was asked to contribute a couple of songs to the soundtrack, but then one thing led to three others, and I’m now playing one of the lead roles in the film, I’ve got seven or eight songs in the soundtrack, and I’ve chipped in on some of the behind-the-scenes technical stuff, too. Anyway, there’ll be a bit more of that in the new year, and then we’re hoping for a release around the middle of 2015. I co-wrote some of the songs with the film’s writer/director/producer, Judith Klassen, and she’s got great musical instincts, so I hope I get to co-write with her some more, whether for the film or just for the hell of it. Meanwhile, I’ve got five songs ready for the next album, and I’m determined to crank out a few more and then hit the studio again in the summer. The next one might take THREE hours!

At Canadian Beats we like to throw in a few fun questions to help your fans get to know you better:

Where has been your favourite place to play a show?

It depends on the venue. Some places have lousy PA systems, but the food is great. And vice versa. Overall, I just like being on stage and thinking to myself, well this beats slaving away in an office cubicle!

If you could only have one album on repeat for the rest of your life, what would it be and why?

Oh wow, good question. I don’t think I can answer that, because I’d get bored with ANY album if I had to listen to it more than five times in a row.

If you weren’t playing music, what do you think you’d be doing?

If you were to tour with any band or artist, who would it be?

I’ve always wanted to open for Billy Bragg, that’s been a dream gig for a while now. As for actually touring, I’d say anybody who’s cool and fun to be stuck sitting next to in a plane/train/van for days or weeks on end. As long as their audience likes what I’m doing, and my audience likes what they’re doing, all is well. Actually, there’s another solo electric guy from Ottawa named Chris Page, I love his music and we get along really well at parties, I think we’d be a killer double bill.

Yes, even though you’re a small gang, you’re a loyal one, and if I could group-hug all of you, I would. Actually, you might be a small enough gang that I actually COULD group hug you. I just need to get all of you in the same room. Trust me, you’d all get along. Many of you would enjoy hugging each other, too…