By Remington Fioraso on December 21, 2014@https://twitter.com/RemingtonFD 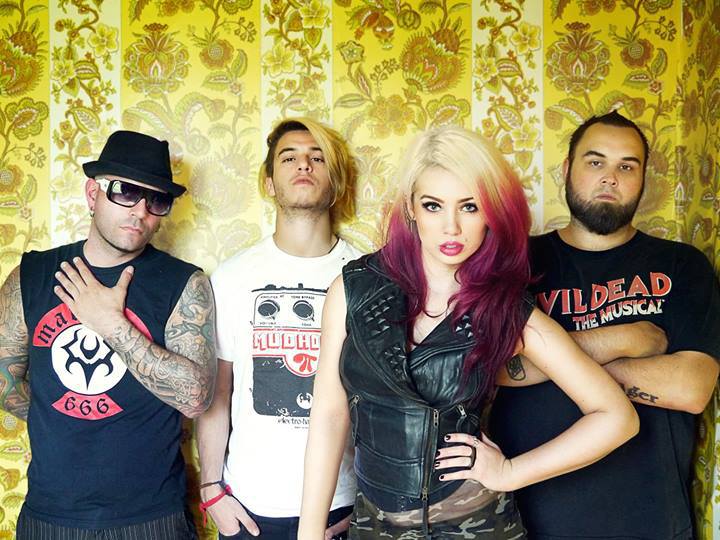 Formed in 2011, Sumo Cyco is a four-pieced, female-fronted hard rock band from Toronto, Ontario.  Sumo Cyco consisting of Skye ‘Sever’ Sweetnam, Matt ‘MD13’ Drake, Ken ‘Thor’ Corke, and Andy ‘The Wolf’ Joseph. The band has recently finished up their tour in Ireland and the United Kingdom and have released their first full-length album entitled “Lost in Cyco City” on June 10, 2014.

I recently had a chance to ask Sever a few questions via an email interview, and today’s your lucky day, because you get to see what she had to say!

SC: No Doubt, System of A Down, Refused, Skindred, B Horror movies to name a few.

SC: When I, Skye ‘Sever’ Sweetnam had a solo career as a pop artist ten years ago, I auditioned a bunch of hamilton boys as my band. Matt ‘MD’ Drake and Ken ‘Thor’ Corke have played with me since then for over 10 years. They helped me develop my musicianship and taste in music. MD was producing a band a few years ago and Andy Joseph stuck out to him a young kid with great potential on drums. Andy joined the band shortly after our original drummer Ryan ‘Legs’ Leger left on tour as the new drummer for Every Time I Die.

What does the typical Sumo Cyco writing session look like?

SC: MD typically will be in the studio all night crafting up some riffs and digital beats. Once he has a strong skeleton, I (Skye) will write some top-line ideas. MD and I will debate back and forth on which riff should be repeated, what lyrics rock, which ones suck and we’ll mold the track until we’re both happy. Then we get the guys in to add their flare on their instruments and we have a song!

How has the reception been for “Lost in Cyco City” so far?

SC: It’s been awesome! Many of our fans have been waiting for three years to get an album out of us. It’s been really exciting giving the masses a bunch of our tracks at once. We’ve released 9 singles individually so far online, so this is our first record.

In the past, you have released singles and EP’s available on tour, what lead to the decision to release a full-length album?

SC: It was actually the fans who demanded it. We were happy just releasing singles and videos every couple months. We applied for funding and were lucky enough that Factor liked the project so here we are!

What were your favourite moments on the “Lost in Ireland & the UK” tour?

SC: Well there were plenty! Andy saw the Berlin wall in Limerick, ate bags of cheese sticks at every Burger King and loved to yell Kevin Sorbo quotes at the top of his lungs. So he was quite a source of entertainment. My (Skye) favourite part of the tour was meeting fans that had a real history with us. I love hearing their stories and finally thanking them in person for years upon years of support. I have never been to the UK and Ireland even with my solo music, so some fans have been with me for 10 years and have never had the chance to see a show. It’s pretty amazing. On top of all that we made sure to see tons of sights and soak in the culture. That’s usually hard to do on tour with busy schedules but we made it a priority.

Are there plans to complete a cross-Canada tour soon?

SC: Yes, we’re hoping that this fall we will have some Canadian dates lined up. So stay tuned!

What is next for Sumo Cyco?

SC: We are in the middle of filming our music video for Cry Murder. We film and produce the music videos ourselves so It’ll be another fun time to torture my bandmates with ridiculous costumes.

At Canadian Beats, we like to include random questions to help fans get to know you more.

What was the last album you bought?

SC: I would say MD is Diet Pepsi. Like a case a day. Andy well, we found out it’s cheese sticks. For myself it’s shoes that I can’t wear because they hurt my feet. But I think that’s a popular one for the ladies.

What are your favourite pass-times when not playing music?

SC: I would have to say film making, we do it for the band and for other artists.

SC: We just want to keep encouraging them to spread the word and to continue to support Canadian independent artists. Stay Cyco!