By Remington Fioraso on December 19, 2014@https://twitter.com/RemingtonFD 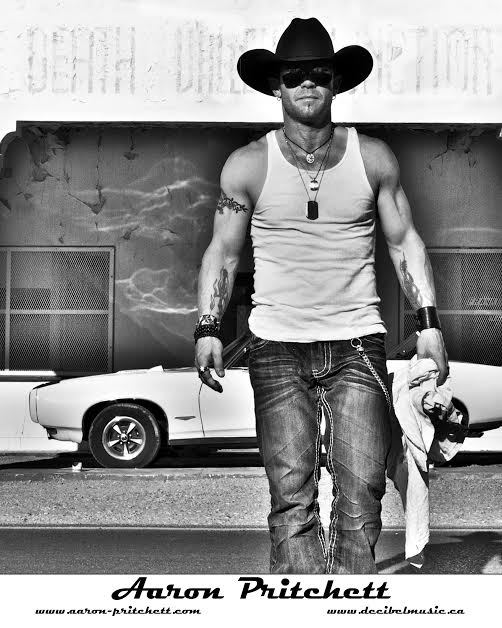 Originally from Kitimat, BC, Aaron Pritchett is a country artist based on the west coast. Aaron’s new single ‘Hold You Like My Whiskey’ can be requested at your local country radio station and is available on Itunes now! It was a great pleasure to have the chance to ask Aaron a few questions during this email interview, I hope you enjoy reading it, as much as I enjoyed conducting it.

Who have been your influences musically?

AP:  When I was young my parents used to listen to a lot of MOTOWN and Elvis Presley but as I grew older I got into the rock scene like Van Halen, Def Leppard and Journey.  You can definitely hear all of those influences in my music now.  I never really got into the country scene until Randy Travis came along and changed my way of thinking. He, Dwight Yoakam, Travis Tritt and Clint Black got me hooked on country music.

Are there any shows that have been the most memorable for you to play?

AP:  2008 in Halifax, NS opening for Kieth Urban.  I had 35,000 people chanting “HOLD MY BEER” at the top of their lungs until I came back on stage for the encore. Pretty amazing feeling.  What is a song that is 4 minutes and 30 seconds long, I stretched it to almost a half hour!

On April 8th, you released your new single, ‘Hold You Like My Whiskey’.  What has been the reception from fans so far?

AP:  So far the reception has been great from the fans.  I hear things like “that’s definitely a YOU song, Aaron!” I think that’s great.  It charted really well on the first week out too so I look forward to seeing how it does in the next month or so.

How did you feel after hearing it was retired on JRFM’s New Country Challenge?

AP:  RELIEVED!!  That thing can be nerve racking, truth be told.  I think it’s amazing that the fans are behind me, to support me, like that.  I really think they’re great!

You are filming a video for your next single, what can we expect to see/hear?

AP:  Well, that’s the plan but sometimes plans change.  I would love to as I think the next single is my favourite in a quite a while.

Can we expect to hear a new album in the works soon?

AP:  Again, that’s the plan but we may just release an EP and then, who knows, maybe a Greatest Hits??? Am I really THAT old?!

Now, for a few fun questions.

‘Hold My Beer’, ‘Hold You Like My Whiskey’…what is your favourite drink?

AP:  Most people might find this hard to believe but I am a wino! I love my red wines, mostly, like pinot noirs, malbecs and valpolicella’s  but have been known to drink some white wines every now and then too.  But I still love my Budweiser’s and shots of JD!

Who is your favourite hockey player?

AP:  I have had many players that I think are great but I would have to say my all-time favourite player was Theo Fleury.  Probably because he’s as “diminutive” as I am (he claims he’s taller… I don’t know about that) but he was someone that played in an era with a lot of big men who took heads off and managed to be successful.  Not to mention his own personal adversity he persevered through.  I will always be a big fan of Theo.

Without the Vancouver Canucks in the playoffs, who are you rooting for?

AP:  The underdog, whomever that may be.  For “Canadian” reasons, I would like to see the Canadiens advance but I think the last team I hang on to in the playoff’s is probably the Pittsburg Penguins.  I like Sid and was a fan of Mario Lemieux when I was younger.

What is your favourite thing to do off-stage?

AP:   Besides the obvious, hanging with kids and wife, I love love love to play hockey.  Whenever I can, wherever I can and for however long I can.  It’s my first love of anything other than family in my life.  I’ve played since I was a little boy and there is not many things that give me a rush like being on the ice.

Which Canadian artist(s) have you been listening to nonstop lately?

AP:  Dallas Smith.  Aside from being a good friend of mine, his music has changed Canadian country music in the last 2 years.  It’s so awesome to listen to the quality of the production and the great songs but, more than that, Dallas’s voice is incredible.  It’s so effortless and has a great tone.

AP:  I want to thank all of them for the years and years…. and years of support, encouragement and love.  I don’t want to go away, and have no plans of that yet, but when that day comes I hope they all know that I appreciate each and every one of them to no end.  Without the fans, there is no music industry.