By Remington Fioraso on December 11, 2014@https://twitter.com/RemingtonFD 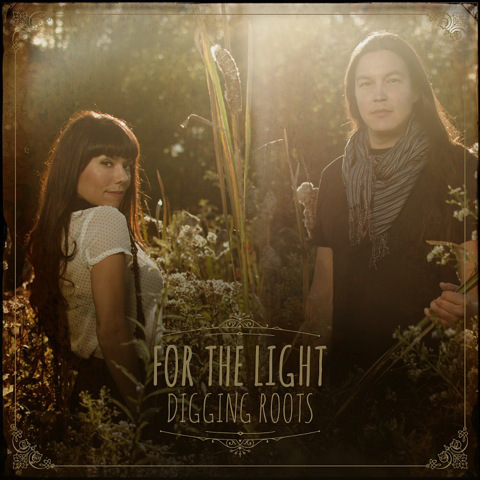 Digging Roots is a cross-genre artist blending roots, rock, reggae and blues from Toronto, ON consisting of Raven Kanatakta and ShoShona Kish. The duo have been recipients of four Canadian Aboriginal Music Awards and won Aboriginal Recording of the Year at the 2010 JUNO Awards for their album “WE ARE”. The duo is set to release their third record, “For The Light” on June 17, 2014.

How did you meet and begin working together?

DR: I was living in Boston and visiting my folks in Ottawa. A friend gave me an address for a singer that lived above an old famous folk club called ‘Rasputin’s’. So one day I was in the neighbourhood and rapped on the door unannounced. Sho-Shona and I hit it off and began chatting about life and music for hours. All of a sudden she jumped up and said “I have an audition right now!” So she asked if I’d join her onstage downstairs at Rasputin’s. I did and we played music together for the first time and out of a 130 people we won the one available spot…and so a month later we played our first ‘official gig’ together at the Ottawa Folk Festival.

DR: Neil Young, Nina Simone, Billie Holiday, Jimi Hendrix, Charles Mingus, Bob Marley, John Coltrane, Peter Tosh and so many more. Over the last few years we’ve also been inspired by our traditional music. we’ve been experimenting with a traditional Anishinabek technique we call ‘Songlines’. Its an old method where one extracts melodies from the land around you by tracing the contours of hills, mountains and valleys. We then take these little melodic gems and integrate them into our songs.

What the typical Digging Roots writing session look like?

DR: Our songwriting session are never the same but they often fall into these categories.
Scenario 1: Make love, sing, have an argument, make love, song is finished.
Scenario 2: Use a songline, make a beat, hash out lyrical ideas, record two versions, keep one for an album.
Scenario 3: The whole song comes like a bursting dam. Five minutes later the song is complete.
Scenario 4: Sho-Shona brings an idea, I bring an idea, we make some music, record a bit and a song is born.

What was the recording experience like for “For The Light?”

DR: Originally the album was titled ‘Flight Plan’ because we were flying a lot and ShoShona is terrified of flying so we started thinking of that as a metaphor about letting go of fears and doubts and just joyfully taking on the challenges life throws at you. Then we did a bunch more touring by car and that took precedence over the concept but we came back with a whole bunch of newly written love songs and decided to call the album ‘Love Drive’. At this point we recorded about 18 or 19 songs and then trimmed the album down to 12 songs. We finished the album on the first day of spring. So as producers we decided to call the album ‘For The Light’ signifying its birth on the day that the sun begins to come back to us. We realized that the album is about the light in ourselves, in each other and in the world. For us this idea of shinning a light and keeping the darkness at bay. For this album we also decided to record it in our little studio with some of the new toys and gear I collected over the years. We used preamps that imparted a ‘brown-ish ’ warm sound with ribbon microphones and experimented with a mix of vintage gear and computer based stuff. It was kind of like found art, using anything and everything available to get the sound we wanted. It was mixed by myself and the fantastically talented Canadian engineer/producer/musician Michael Wojewoda.

What can fans expect from your new album?

DR: Style wise if blues and reggae had an Indigenous love child it would be named ‘For The Light’! Our awesome fans should expect our truth, our struggle and our commitment to the light that we all hold inside of us. If we did our job they’ll hear some of their own stories in these songs too. I also hope they hear music that’s recognizably Digging Roots and our evolution into new ideas and sounds that captured our imagination over the last few years. I hope that they crank their speakers and let the dancing begin.

You recently filmed your new video for “For The Light”, what can you tell us about it?

DR: This year was a long Canadian winter so we tiptoed out early and shot a video at the Gulf of Mexico with the sun. We got brown…er, filled our bodies with vitamin D and jammed our music into a video for ‘I’ve Got it Bad’. Then…the very last scene on the very last day Sho-Shona was stabbed on her little foot in the ocean and poisoned by a stingray. So obviously we had to stay in paradise longer as we nursed her back to normal but she said that it was as painful as child birth; the Internet confirms it…

What songs are you most looking forward to play during your upcoming tour?

DR: We love opening the show with the opening song on the album ‘All Night’. We’re also stoked to play ‘Clumsy Lover’ as it has a quality like a massive slow moving ocean swell hitting the shoreline.

At Canadian Beats, we like to include a “fun” portion for fans to get to know you better.

What is your movie?

DR: Empire of Dirt and Like Water For Chocolate

DR: The new Black Keys’ Turn Blue…which we can’t get enough of!

If you could have any super power, what would it be and why?

DR: The ability to heal water. Serious business what’s happening with the water; but that’s another interview…

Do you have anything else you would like to say to your fans?

DR: Spread love, be brave (for the right reasons) and never compromise who you are! And…see you out there on the road!