By Remington Fioraso on December 9, 2014@https://twitter.com/RemingtonFD 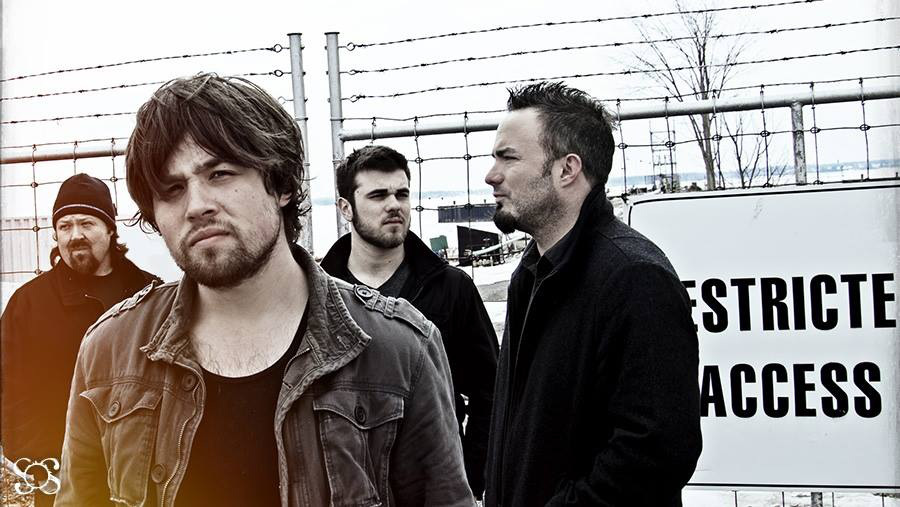 From Kingston, Ontario, Suns of Static consists of Brandon Taylor on vocals, BiL Cassidy on guitar, Darrin McMillan on bass, and Jordan Bulhoes on drums.  With a new direction and changes in line-up from their first release in 2011, the band is gearing up for their second release ‘Rise’ on May 24, 2014. We had a chance to conduct an email interview with guitarist/producer BiL Cassidy, so we highly recommend you keep reading.

What can listeners expect to hear with ‘Rise’?
SOS: Tightly crafted, catchy rock music, with a wide range of attitude and moods.

Who and what have been your influences to write?
SOS: Our songs get started on guitar initially, usually (but not always) without lyrics. Many years ago, I learned a new open tuning from playing some Tea Party songs. I love the droning open strings. It lends itself to many different vibes all at once, being dark and moody, or an eastern ‘tribal’ feel. I use that tuning all the time now, so Jeff Martin was definitely an influence there. Once the song starts to have some structure we introduce the vocal melodies and eventually everything comes together, with each member adding their own personality and tastes. Which is where things get interesting because we all have varied personal influences. Lyrically we were inspired by anything from a news story (The Drone) to abstract concepts (Migrate, Flares, Hold & Wait), to a Queens Of The Stone Age show (Going Deep), to personal experience (Sanctuary).

You are playing two shows in one night as part of your album release show.  What led to this?
SOS: Mainly, the idea is to play for as many people as we can. Since we have friends and fans in both age groups we wanted to do two dedicated shows for them, and invite some friends to play with us: The Stone Throws for the all ages show, and Terrestrial for the 19+ show. Both are well known Kingston bands.

What song(s) are you looking forward to playing the most?
SOS: Every song is fun to play live, but my favourite lately is ‘Fall From The Sky.’ We do a ‘live’ version of that one where Jordan (drummer) goes nuts for a bit in the middle section. He is such a talented guy on the drums, it’s challenging for me to play my part without getting lost in all the crazy stuff he’s pulling off. I usually have to look away. Also, songs like ‘Going Deep’ and ‘Fear & Forgiveness’ where Brandon is singing his ass off in the choruses.

After your album release show, are there plans to tour?
SOS: Definitely. We want to play as much as possible, but we also have day jobs, so with some scheduling we hope to play some select shows outside of Kingston, in venues from Toronto to Montreal. I wouldn’t call it a tour as much as some out of town gigs at this point. Beyond that we will see how it goes.

What encouraged you to enter ‘Fall From the Sky’ in CBC’s Searchlight 2014?
SOS: The album has a lot of cool songs to choose from, so it was a bit of a crapshoot. Some songs we were thinking about entering were probably a little more ‘pop’-friendly, but they were too long. We felt that ‘Fall From The Sky’ had a catchy enough chorus and had a unique vibe to it in terms of what’s out there today in ‘rock’ music, while still representing the overall sound of the band.

Who was the first Canadian artist/band you remember listening to?
SOS: That would have been a long time ago so that’s a tough one. Probably Rush, or Anne Murray. One of those had very little influence on our new album.

What was the first album you purchased?
SOS: Men At Work, Business As Usual on cassette. Catchy tunes. I loved playing drums along with that one. Also air-saxaphoning was all the rage back then.

Who was your first concert?
SOS: Hard to say, but maybe it was Raffi, or maybe it was The Tragically Hip with Blue Rodeo at Landsdowne Park in Ottawa, or Van Halen.

What is your go-to song(s) now?
SOS: I wouldn’t say we have a special ‘go-to’ song that stands out from the rest, but ‘Flares’ was our first song on the radio, so you could call it our first, ‘single.’ We are working on a music video for it as well. We all usually have big grins on our faces at the end of that one.

Do you have anything you wish to say to your fans, and soon-to-be fans?
SOS: Just thanks for coming to our shows, buying the CDs, and for giving us a chance and we hope you enjoy our music as much as we enjoy playing it!