By Remington Fioraso on December 6, 2014@https://twitter.com/RemingtonFD 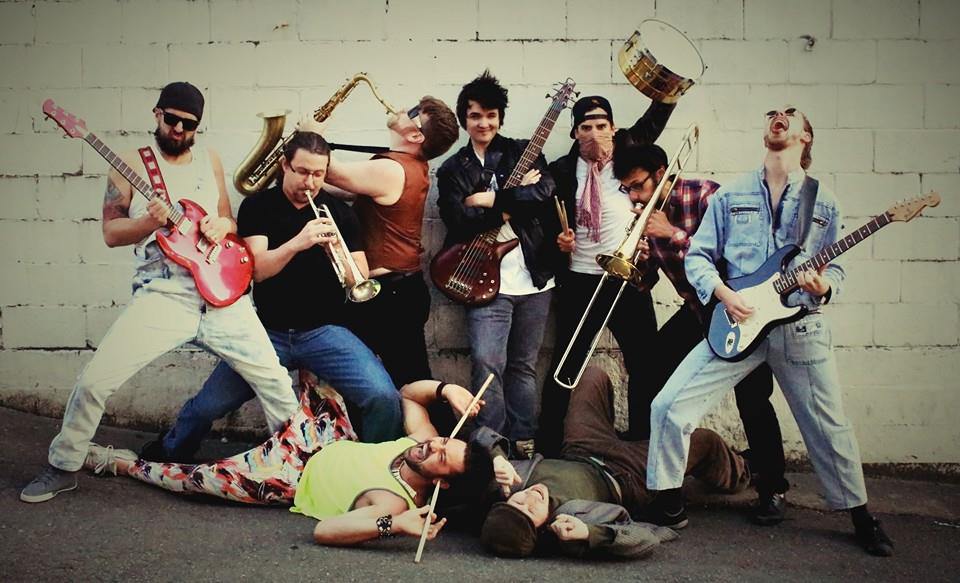 Five Alarm Funk is a ten-pieced party-funk band from Vancouver, BC.  The band consists of Gabe Boothroyd (Guitar), Oliver Gibson (Guitar), Neil Towers (Bass), Tayo Branston (Drums/Vocals), Tom Towers (Congas), Carl Julig (Timbales), Nimish Parekh (Trombone), Dameian Walsh (Tenor Saxophone) and Kent Wallace (Trumpet).  Five Alarm Funk will be releasing their fifth studio record, “Abandon Earth” on June 7, 2014.   I recently had a chance to ask Tayo Branston a few questions via an email interview, and now you get to read all about it!

FAF: Its hard to define this from the bands stand point, as all nine individuals have a massive array of loves and styles that have influenced and inspired each of us through the years. Personally, Frank Zappa, Primus, Tito Puente, Nirvana, Beats Antique, Rage against the machine, Tower of Power, are all artists that since childhood and up to now ,have defined styles and playing that I love so much.

How did you form as band?

FAF: It was a culmination of “through the grapevine” and randomness that brought this group together. Many players played with each other separately prior to FAF beggining. It was through Myself, Neil our bass player, and Gabe, one of our guit players that this collection of musicians gravitated. It was a horrendous funk magnet.

How does it feel knowing that you have been playing together in Five Alarm Funk for over 10 years?

FAF: It is wonderful. Friends have become brothers. We’ve been through so much together, good and bad, coming this far now seems like just the beginning , every moment we play together we get better together, we know what each other is capable of and are all pulling the line harder than ever before. There is so much energy within the group to succeed as Five Alarm Funk that all I can think about is the next ten years.

What have been your favourite experiences as a band so far?

FAF: As far as shows go, Our trip to Kee Lung (Taiwan), Shambhala music festival, The Commodore Ballroom in Vancouver, Vancouver JazzFest, London Sunfest, Saskatoon Jazzfest, Evolve in Antigonish, all amazing playing experiences that will never be forgotten.  I think the best experience we as a band have, is no matter where you are, or how many people are in the crowd, is getting up and expressing your passion, making friends with people who enjoy it and really capturing the creativity that only us as humans have.

How was it working with producer Ben Kaplan?

FAF: Working with Ben was the most rewarding studio experience FAF has had. It was wonderful to work with someone so willing and energized to go outside of the box. His flare is riddled in every beat and note on the record and his creativity is second to none. It was an absolute pleasure.

What or whom influenced you to create a concept album?

FAF: I think the biggest conceptual influence is Joe’s Garage by Frank Zappa. Not to say this is the reason we created a concept album. But many a days on the road have been spent listening to that record and the intricacies and hilarities of it. But the idea of a concept album was never far away from us, our love for majestic riffs and epic saga-esque type music lends itself perfectly to a musical adventure.

What are you looking forward to the most for the Album Release Party in Vancouver on June 7th?

FAF: The idea of playing infront of the fans of the city that brought us to life is the most inspiring of all. Vancouver is our home and has shown us so much love and dedication ,that to play in our city brings about an energy within ourselves that is unsurpassd by all others. Also, releasing the album that is by far the best FAF recording in our history, is as exhilarating as it gets.

FAF: MAYHEM!!  Our goal as a band is to not only provide and intricate and tight musical performance but to do what musicians do best….have fun. The onstage performance is a mind altering, sweat drenched dance party.

If you could create your dream tour line-up, who would it consist of?

FAF: I’m slightly confused by this question. What I’m assuming is band tour line up, not a player tour line up, so I’ll go with that. I’d have Billy Joel opening the night with FAF playing second, Rage Against The Machine Shredding third and Michael Jackson closing it down. After party would have Prince and Toto laying down the heavy grooves.

What is your favourite thing to do in Vancouver?

FAF: Thank you. We thrive on playing music for you and making new friends. For us, that’s what life is all about. Rock on!!