By Jordyn Armstrong on December 2, 2014@jordynhannah95 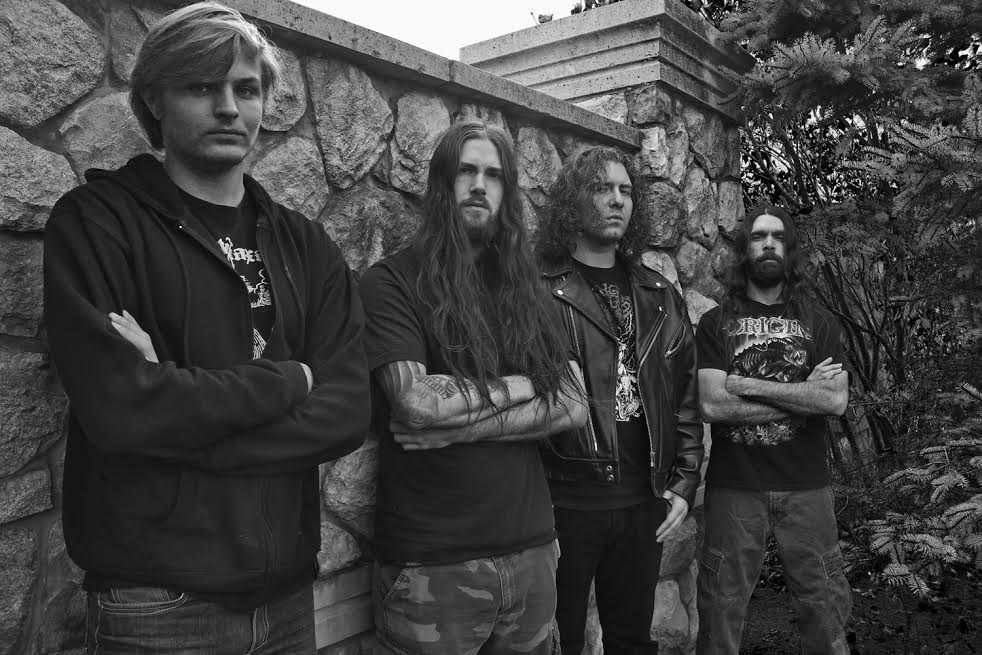 Blackened death metal band, Conquer, is setting up to release their new EP, “A Worms Demise” on December 2nd. The Oshawa based band’s lineup is Devlin Anderson (vocals and guitar), Ryan White (guitar), Simon Oukhine (drums), and Rob Holden (bass). The title song of this EP is available for free download on their Band Camp page. So check it out while you’re reading this great interview!

What exactly is “A Worms Demise?”

Devlin: The song is about man rejecting his true self and will, regression back into a primitive organism. Easily controlled and disposable.

Where did you come up with the idea for the album?

Devlin: The songs I have written for the ep are basically the duality between good and evil, also how both sides can be subjective in the sense of who is right or wrong. From a Demon’s point of view an Angel can be seen as a negative force.

It has been said your main objective is to “pay homage to the forefathers of Extreme Metal and bring the classic sound of bands past to a new generation of metal heads.” Who are some of the forefathers you speak of? Are they a big reason why you decided to do metal?

Devlin: I am very much influenced by the originators of early Death and Black Metal. There are so many band I could name off, but I would say my prime influences are bands like Celtic Frost and Morbid Angel.

Ryan: I Choose to do metal cause of its power to speak such volumes and be able to just scream it out vocally or with a guitar, drums whatever to make the power come through.

How do you believe you pay homage to these bands?

Devlin: I would just say taking the influence they had on me and putting my own ideas into what they inspired me to do. Conquer is our vision of the past made modern.

Ryan: By using classic death and black metal instrumental techniques and by keeping the art and message of the music #1

Ryan: After Devlin and I having our own separate bands and playing shows together my past band decided to have him in for guest vocals. He mentioned while doing the track he was looking to start another project…After kicking ass on that album and a few other differences elsewhere I thought this could be a good route for me to try. Sent him and message at the end of August and here we are.

Devlin: It was great to hear Ryan wanted to come on board, this is my first band preforming vocals and playing guitar. Leads are not my strong point and Ryan is a great lead player, so this added a great dynamic to the band. Conquer was originally going to be a one man Black Metal project, but I decided to start jamming with other musicians. I met Simon online and the music we were playing between him and I started off as straight forward Black Metal to what it is now.

Devlin: I read a lot about history, especially about warfare and biblical times. The Bible is one of my favourite books, there is a lot of brutal subject matter in there. I also like anything written by Aleister Crowley.

Ryan: Anger, Aggression, power, emotion “Your anger is a gift”

Devlin: Probably a job in the art field. Graphic design or maybe even Tattooing.

Ryan: Wood working. Right now I put boxes on a skid for $$$ at Sobeys warehouse.

If there was one thing in the music industry that you could change; what would it be and why?

Devlin: Make sure that more talented musicians and bands get signed. There are so many people that deserve recognition that never get it.

As a Canadian Beats tradition, we like to ask a few fun questions for the fans to get to know you a bit better.

If you could ask your idol one question, who would it be and what would you ask?

Ryan: Shawn Lane…Who taught you? What planet are you from?

Devlin: I got to meet Martin Eric Ain from Celtic Frost when I was a teenager. I asked him what advice he could give me about having a great Metal band. He more or less said just stick to it, there is a lot of bullshit and hard times that come with it, but if you want it bad enough you will succeed.

What would you do today, if it was the last day ever?

Devlin: It depends on my mood. One part of me says to be with my family and comfort them, another says steal a car, drink a bottle of Jack and cause as much mayhem as humanly possible.

Ryan: Smoke a lot of weed, go play guitar with my dog at the beach and watch it unfold. 🙂

What is the best part about being a Canadian musician?

Ryan: Canada has an amazing musical community from Jazz all the way to us metal folks. Great support from all the local circles around the country.

Devlin: Being from the same country as Rush!

We are working hard to obtain a full 10 song album and to start killing shows asap. Appreciate all the immediate support from everyone.