By Remington Fioraso on November 27, 2014@https://twitter.com/RemingtonFD 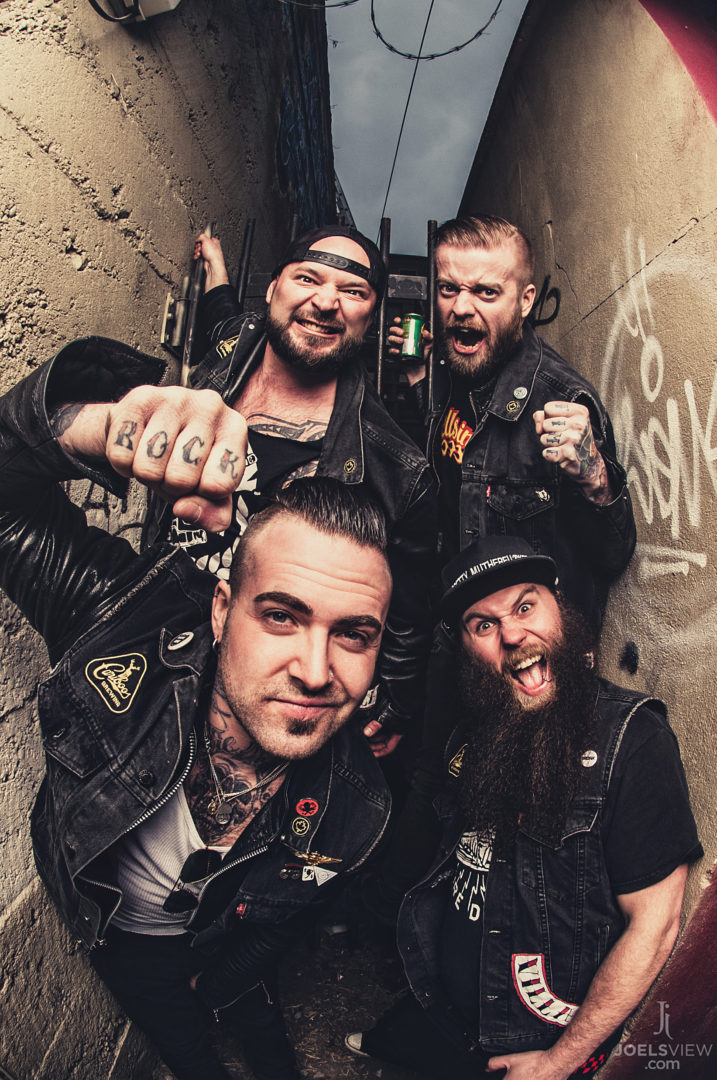 The Wild is a rock band from Kelowna, BC. The band is formed by Dylan Villain, Pistol Pete, Boozus and Reese Lightning. The Wild will be releasing their upcoming EP in early 2015.

Musically our influences range from everything from Howlin’ Wolf to AC/DC to Pantera. It’s pretty vast. If you can really feel it & there’s conviction in it, chances are we’re feelin’ it too. Outside of music, there’s plenty of things we’re under the influence of 😉

Lightning, Boozus & myself (Dylan Villain) met at a house party back in 2005. They were playing there that night in one of their old bands. We had mutual friends, got introduced & started drinkin’. I remember the guy that owned the house had put out a pitcher in front of the area they were playin’ in for people to put money in.You know, give them a tip kinda thing. They were doin’ pretty well too! There was quite a bit of cake in there. Anyway, so by this time of the night I’m fuckin’ hammered… I’m younger than these guys too. I was like 18 at the time so you know I had something to prove. So we’re carrying on & whatever when all of a sudden, it hits me. ‘I’m gonna puke.’ I remember pointing away to nowhere & saying “Holy fuck!” so they all turned their heads. Then I instinctively grabbed the first thing I could find to throw up in, (pitcher full of money) puked in it real quick then put it down like nothing even happened. Yeah… For real. I did that. Imagine that, right? Like ‘Here you go fellas, here’s your pay for the night… in a beer jug… soaked in puke…’ Awesome. After that, we formed a band & we’ve been playing together ever since. 10 years in different bands, the 3 of us. That’s actually how we met Pistol. One of our old bands played a show with one of his old bands. He & I were instantly friends. We stayed up for 2 days that first night we met. Such a good time. I remember we kept saying ‘Man, how cool would it be if we got to play in a band together one day?’. Haha well, here we are. Pretty cool how that worked out.. Lotta history. Man, we got stories.

What led you to calling the band ‘The Wild!’ ?

I can’t really tell you where my ideas come from because I’m not even sure exactly. But they come to me & when they do, I seem to know which ones not to let go of. This band & everything about it is a perfect example of that. I knew I was onto something good. Maybe it was the songs that sparked the name. They sound fuckin’ wild!

How did it feel upon getting signed to eOne Music Canada?

It felt great! They believe in us & what we’re all about. I feel really good about that. At a time where there’s not a lot of labels supporting rock’n’roll bands like us, I feel very fortunate. We have a good team, made up of good people. That’s what it’s all about. Surrounding yourself with a team of people that you like to work with, understanding who eachother are as individuals & puttin’ in work together. I feel we have that with eOne so yeah man, I feel really good.

What can you tell us about the upcoming EP so far?

It fuckin’ RIPS! We tracked at Warehouse & The Armoury Studios in Vancouver, BC. Produced & Mixed by our brother Mike Fraser (AC/DC, Aerosmith, Jimmy Page). Mastered at Sterling Sound in New York City. I’ll let the record do the talkin’. When it comes out… Buy it & turn that shit up!

How was the writing process for it?

Everyone’s heard someone say ‘You have your whole life to write your first record’. It’s true. Some of these songs have been kickin’ around in the bank & re-worked over the last 2 years. There was a time we were gonna release this record a year ago but I’m glad that we waited. When we linked up with Mike, he really pushed me to be a better musician & a better song-writer. It’s inspriring to work with him, you know? Like I grew up listening to all those records he’s worked on & being such a big fan that when we started working together it was like, ‘Ok. I need to be on his level. How can I challenge myself to be better at my craft?’. From that point on, I’ve held onto that & really tried to write something bigger & better than the last song I wrote. I owe a lot of that to Mike. I love that guy man.

Are there any songs that you are particularly excited for fans to hear?

ALL OF THEM. Our fans have been waiting a long time for this record. I can’t wait to get this thing out!

What are your go-to songs at the moment?

Fuckinnnnnn… Fish Tacos, Poutine, Pizza. I eat all that shit.

Who are your favourite bands from Kelowna?

Charlie Handsome and The Brats, Devon Coyote, Shreddy Krueger, Frig Off, The Fangles.

We are The Wild! & We are fucking crazy!