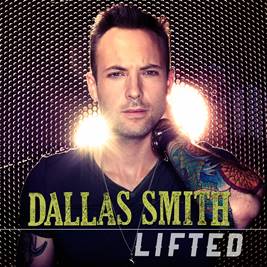 ‘Lifted’ is the second full release from rock turned country artist Dallas Smith. Since his first steps into country music with his first full length album ‘Jumped Right In’, Smith has experienced an immense amount of success. Not only has he toured all over North America, he has also received numerous award nominations from the JUNOs and the Canadian Country Music Association. To top all of that, he holds the title for the fastest selling Canadian country single to go platinum as well as the highest selling digital Canadian country single with “Tippin’ Point”.

The album has 11 songs, five of which have already been released with his latest EP, ‘Tippin’ Point’, and the lead single off of this album, “Wastin’ Gas”. The other songs, “Cheap Seats”, “Lifted”, “Heat Rises”, “Thinkin’ ‘Bout You’”, and “Just Say When” go to prove that Smith will go far in the country scene. His country sound with just a bit of rock to it results in very catchy songs that will be stuck in your head for hours after you listen to them. “Lifted” and “Heat Rises” are probably my favourite of the new songs off of the album. “Wrong About That” and “This Town Ain’t A Town”, also on the ‘Tippin’ Point’ EP, are favourites of mine as well.

Over all, this album is a very well put together release from Smith. I do think it would have been better to not have five out of the six songs from his previous EP also be on this album, but they are good songs nonetheless. These songs are sure to get the crowds up and moving on his upcoming tour in early 2015.