By Lindsay Newman on November 22, 2014@https://twitter.com/lindsaynewman_ 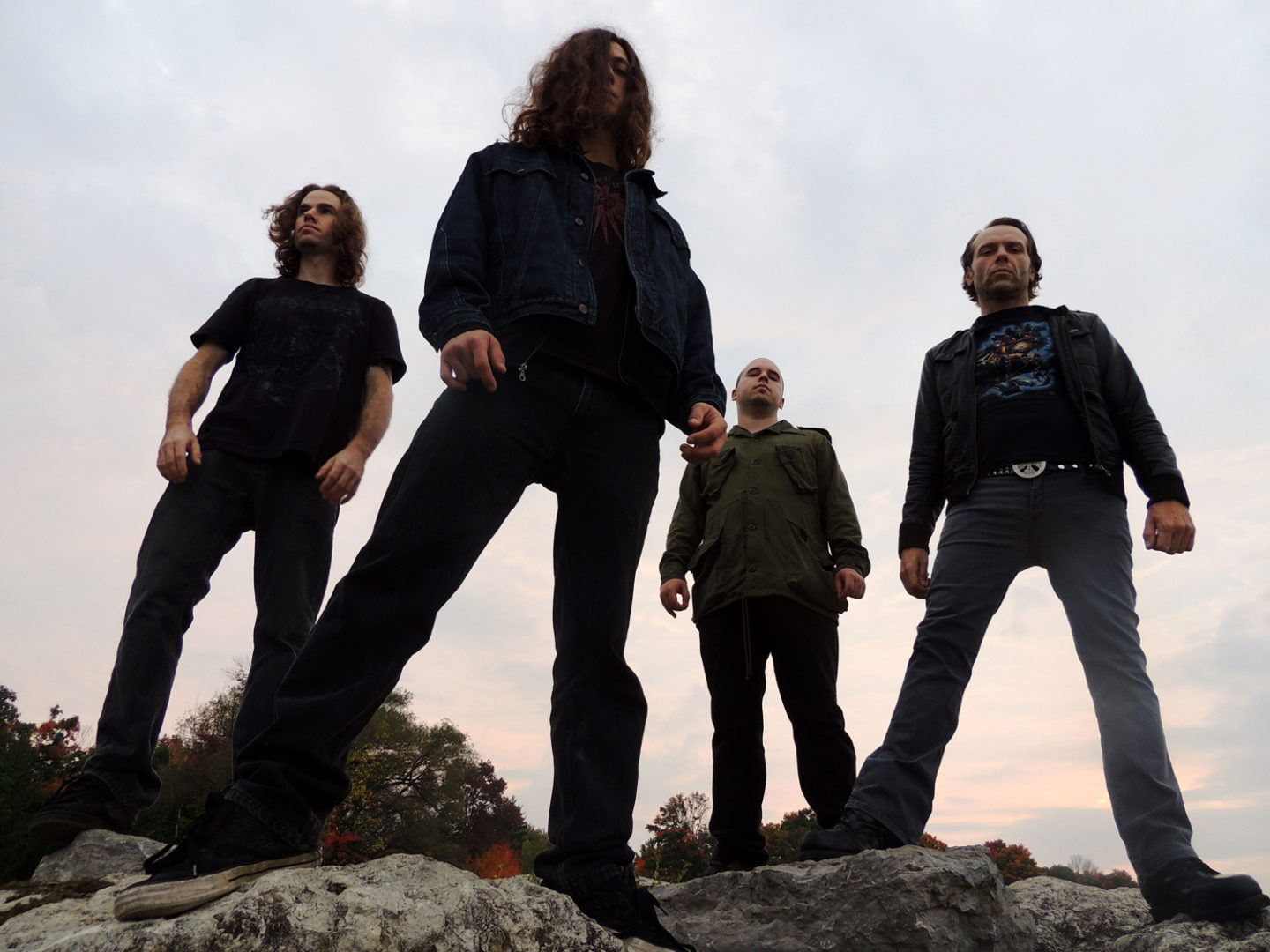 Idol of Fear are a metal band from Barrie, ON. They formed back in 2011. The band has just released their debut album “ All Sights Affixed, Ablaze” on November 18, 2014. The album was mixed by Jeff Wardell and mastered by Tore Stjerna.

Austin: I met Johnny about 11 years ago when he was still teaching guitar. He introduced me to some real heavy music as well as other young musicians who were playing in a high school black metal band. Dave was playing drums at the time for that band and I was the guitarist; so began our initial work together towards Idol of Fear. It took us some years and many recordings to get our vision set but once we had a blueprint in place we knew it was time to get more serious. In 2012, we met Doug through an advertisement we placed locally. He immediately proved to be a dedicated, quick study and in possession of the right creative approach. We started working on a set and had a show lined up without a bass player in place. At this point Johnny stepped back into the fold and offered to assist us by playing bass for the show, and afterwards was impressed enough by our potential he decided to dive into the madness.

What are your influences/ inspirations for your music?

We are all separately inspired by a wide array of different bands, but our music is influenced primarily by black metal, death metal, rock, classical composers, punk and industrial music to an extent. At this point in our progress as a band it has become very natural to just write this “Idol of Fear” music and not think too much about what others are doing or what we are doing really. We know where the sound needs to go and follow that instinct.

What was the writing process like for writing “All Sights Affixed, Ablaze”?

Being a debut album, some facets of “All Sights Affixed, Ablaze” stretch back through years of riffing and lyrical mind strains. Other parts were written hours before tracking… definitely down to the wire, but sometimes when the inspiration hits in a certain way and it’s undeniable then that’s what happens. We tried to challenge with ourselves each aspect of the album and came through the other side a much stronger and tighter unit.

Why did you decide to pursue music?

Well, to get chicks of course haha. After we realized that metal does not exactly bring out the ladies (although it’s getting better for sure), we knew we had to play the best kind of metal never-yet-heard across the lands or we’d be in big trouble. Basically it became mostly a quest to create something emotionally and musically powerful, something that people can connect to, that makes a statement and will stand the test of time and trends.

What made you want to offer a free download of “All Sights Affixed, Ablaze”?

This seemed fairly obvious to us because we felt it best encompasses the overall feel of the album and showcases some catchy riffs/vocal interplay.

As the album release date approached, what were some of the emotions going through your mind?

We are happy to finally be able to unleash it upon the world. Like the album title suggests, we are looking ahead at furthering our goals as musicians and individuals while maintaining the integrity and momentum of Idol of Fear.

We plan on playing a lot of shows in the near future with other strong-willed artists. Promoters or interested parties can contact us at booking@idoloffear.com , no reasonable offers turned down. We look forward to pushing the album as much as possible and spreading Idol of Fear globally. More new material is on the way shortly, stay tuned.

At Canadian Beats we like to throw in some fun questions to help the fans to get to
know you better.

What was the first album that you bought?

Austin: Slayer – Riegn in Blood
Dave: I wanted the Beach Boys but my dad got me The Kinks instead
Johnny: Oingo Boingo – Dead Man’s Party
Doug: Sepultura – Roots

If you could have dinner with one famous person/band dead or alive who would it be?

Johnny: General Zod.
Dave: Marquis de Sade, ya don’t judge.
Austin: Genghis Khan, to try and glean some successful business strategies
Doug: Che Guevara to try and sell him a t-shirt and cause he followed his visions

Dave: Satyricon in Toronto, 2004. Amazing show.
Austin: Cryptopsy w/ Lord Worm in Barrie, 2004. I was wide-eyed for sure.
Johnny: I was at both those shows haha, mine was Skinny Puppy – Too Dark Park Tour, Toronto, 1990
Dougie: G’n’Fn’R (Guns and Rosers cover band) sometime in an underage drunken haze

What are some interesting facts about you?

We’re pretty in to grave robbing, though we practice catch and release of course

What’s something you would like to say to your fans before we wrap up?

We’re just getting started with Idol of Fear. We are currently working on two new albums, hoping to start the demo process in early Spring. We look forward to being on the road and seeing you out at our shows. We’re moving fast, and strong and ready to crush. Keep an eye out for us or you’ll wish that you did!!