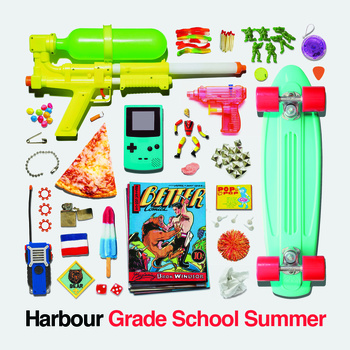 Harbour is a Punk/Pop band from the big city of Toronto, Ontario. There are four members that make up the band, Jamie Mittendorf (Vocals & Bass), Henry Dowling (Guitar), Josh Bombay (Drums) and Mike Bielawski (Guitar & Vocals). Harbour was formed in 2012 and are now signed with Bullion Records, which is located in Japan.

Harbour just recently released an album called Grade School Summer a few days ago. At the first listen of the album I didn’t know what to think of the songs but after a couple more times I found myself fully captivated but the lyrics and catchy tunes. There are 6 tracks on the album, the first one I really liked happens to be the bands first music video called ‘Grade School Summer’. It was high energy and very catchy lyrics to sing along with. The second one I like is called ‘The End’ which is the first track off the album. With its interesting chorus it will have any listener hooked into listening to the full album multiple times. We look forward to seeing more of Harbour in the future!