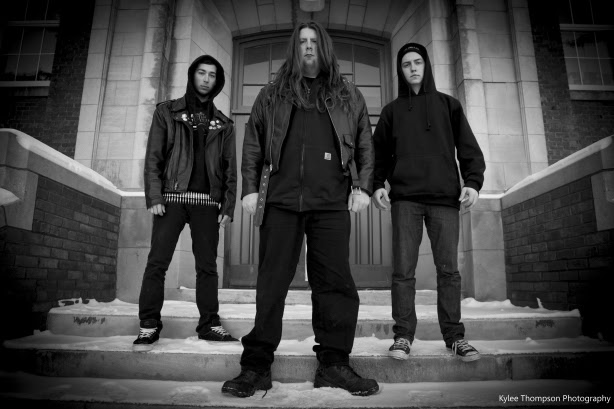 Display of Decay are a death metal band from Edmonton, AB. The band consists of Tyler Goudreau, Sean Watson, Avery Desmarais, and Jeremy Puffer. They just release their EP Outbreak of Infection publicly on August 26th. I asked guitarist, Sean Watson a few questions about the band and their new EP.

Can you describe Display of Decay for the readers who haven’t heard you before?

We are a death metal band from Edmonton Alberta. If you’re looking for raw, aggressive sounding tempos with a old school approach, you’ve come to the right place.

Your new EP, Outbreak of Infection, was just released. What can you tell us about the recording process?

We started recording around spring of 2013, and aside of myself the entire lineup was changed since the 2012 full length release. We had set out to rerecord a couple tracks to showcase what the new lineup was made of, and as well to show the direction our sound was going with some new material.

Even though it only just came out, what has the reaction been like from your fans?

It’s been received very positively, our following has been consistently growing over the years, and this particular release has made the biggest push for us.

Funny thing about recording is its such a process to make everything sound perfect. I had to layer my guitars, and even the slightest pick scrape was a do-over to ensure the best possible release. I would say Praise the Gore would be my favorite to record, as it was a song we originally started writing back in 2007, and eventually ended up on the full length, to be rewritten slightly on this EP. Favorite to perform live would easily be the title track, “outbreak of infection,” its such an in your face aggressive intro, and keeps a strong pace throughout.

You have plans to tour Western Canada in 2014. What are you looking forward to the most about touring?

We had played a fair few festivals this summer, and the nice thing about that is getting to play to such a broad audience from all different areas of the country.

Do you have any plans on touring Eastern Canada as well?

We’re currently wrapping the year up to begin writing a second full length and start 2015 off strong. Once that release is out, you’ll just have to see.

There are lots of talented musicians out there, we may possibly throw in some guest vocals on the next release.

I’d have to go with Cryptopsy and Kataklysm. Cryptopsy especially, writes some of the most fantastic, catchy riffs out there by far.

If you enjoyed “Outbreak of Infection,” then you’ll have to wait and see what’s in store for next year