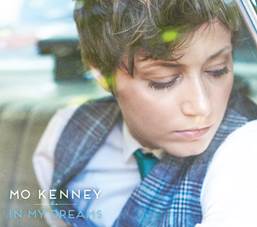 ‘In My Dreams’ is the follow up album from Nova Scotian singer/songwriter Mo Kenney. Her previous self-titled album earned her a Canadian Folk Music Award for New/Emerging Artist of the Year, an ECMA for Pop Recording of the Year, three Nova Scotia Music Awards, as well as the 2013 SOCAN Songwriting Prize. The success of the album also brought her tours with Ron Sexsmith, Joel Plaskett, and opportunities to perform at international festivals including some in Iceland, England, and Australia.

With expectations from her last album high, ‘In My Dreams’ has no problem impressing listeners yet again. The 10 song release shows off more of a band sound rather than just her and her acoustic guitar as her previous album. It’s hard to pick any favourites from this album, but “I Faked It”, “Telephones”, “Pretty Things”, “In My Dreams”, and “Dancing”.

Her fans will not be disappointed by this album. With different songs showing a softer/slower side, and some that are more upbeat, there is something for everyone on this album. It would be a perfect complement for those sunny fall days that are sure to come.