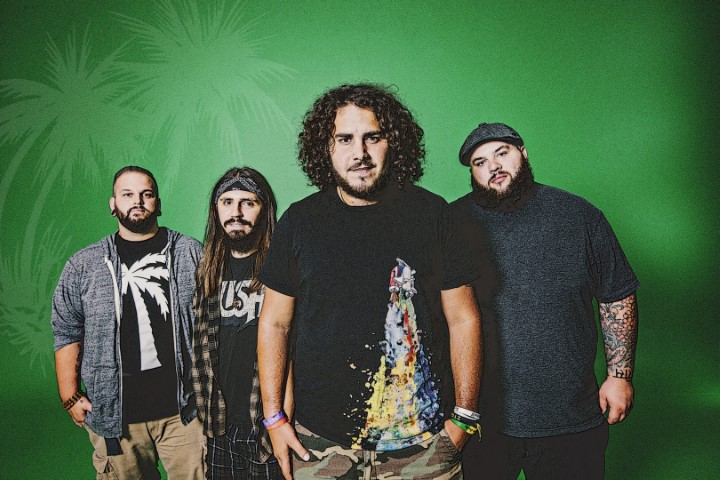 Tasman Jude is a multi-genre (Roots, Reggae, Percussion, Soca, Ska, Hip Hop, Pop) band from Grande Prairie, Alberta. Caleb Hart, Al Peterson, Derek Wilder, and Adam Paananen make up the band. Released their first EP, ‘El Norteño’, on April 9th, 2013. Now they are set to release their full length album, ‘Green’, on October 7th. They are also heading out across the country in support of the album. Be sure to check out the tour dates and go to a show near you. Want to know more about this band? Well you’re in luck because I was lucky enough to do an email interview with lead singer, Caleb Hart.

How did you come up with the name Tasman Jude?

There was once a teenage girl who was living a rough life and ended up pregnant. Instead of having an abortion, she birthed a little boy and named him ‘Tasman Jude’, he was adopted and renamed… Al Peterson.

The birth name of our guitarist that ‘shouldn’t have been born’ is Tasman Jude. It means “of great faith – He who is praised”, as soon as Al told me (Caleb) that name and I found out what it meant….I knew we had found our band name.

Your album ‘Green’, comes out shortly. How do you feel it compares to your EP? How has your sound changed, if at all, since then?

El Norteño was recorded when we were only 2 months old. It was a good representation of our songwriting and sound at that time.

That being said; ‘Green’ encompasses our roots sound. Everywhere from slow & soulful, to a faster Soca-like sound. Green is just the beginning…

How would you describe your music to someone who hasn’t heard it? What song would you suggest they listen to first?

It can be a little hard to simplify and explain a sound. After shows, people always come up after shows and tell us that before that night they had never really been into reggae, but suddenly, they are in love with the music! Honestly, I think that’s because a lot of people haven’t heard much Reggae! But we aren’t we aren’t your typical band, we blend in a lot of styles people from Canada aren’t used to hearing on a regular basis!

For over 120 shows we were three dudes with an Acoustic guitar, 2 djembes and vocals. When you initially see that, people often didn’t expect a really full, energetic sound; but we always surprised them and now that we’ve added Bass… it’s a party.

I’d recommend people to listen to ‘Fountains’ from our EP ‘El Norteño’ first, it’s very accurate to our sound – instrumentally, lyrically and rhythmically. Our previous single ‘Family’ is always a live favourite as well, but the new single ‘Every Breath’ gives a great taste of ‘Green’ and the artists we are becoming!

‘Green’ is the first of three concept albums for you. Can you tell us anything about ‘Gold’ and ‘Red’? Is there going to be a lot of difference in the sound of the albums?

We intentionally put some teasers in ‘Green’ to give a TASTE of what ‘Gold’ and ‘Red (Ites)’ are going to sound like. Look out for track 8 and 9 for the answer to this question…

What was the writing process for ‘Green’ like? (Lyrics first, melody first, etc.)

All our songs are written as a band. Which went from a two piece, to a three piece, to now: a four piece. The majority of the time, we just start jamming to a riff that Al starts playing (sometimes unconsciously)… The next thing you know, there’s a new song.

The title track ‘Green’ was actually the strangest songwriting experience for us. None of us really knew what we were going to play exactly, mere days before recording it. To me, it ended up as one of the most unique and interesting track on the record.

You’re hitting the road for most of October and November, have you ever toured this extensively before? Are there any stops that you haven’t been to before?

Doing almost 220 shows in the 20 months of Tasman Jude’s existence kinda feels like we’ve been touring constantly since we started. However, we’ve never been gone for 6 weeks straight. Then we come back for a few days and leave to the Caribbean for about 2 weeks. We’re extremely excited for it! There are a few places that we haven’t played until this tour – Sault St Marie, North Bay (w/ Ziggy Marley), Olds and Revelstoke are the ones that come to mind.

What can fans expect on your tour?

Well, firstly, I’d like to clarify that we don’t have fans, we have family members. Fans is short for fanatics and we don’t want fanatics – we want family. That being said, the family are in for a type of show that they have never seen before. We’re surprising ourselves with these new songs and the way the set(s) lined up!

At Canadian Beats we like to throw in a few fun questions so your family can get to know you a bit better:

What’s your favourite song to play live? (Yours or a cover)

As Tasman Jude, we’ve never played a cover song. Our favourite song to play is probably ‘Rejoicin” from our EP ‘El Norteño’. For this upcoming Album release tour, it’s gonna be tough to choose a favourite ‘cus the songs are so diverse.

There are SO MANY amazing Canadian artists/bands!

If you could only listen to three albums for the rest of your life, what would they be?

Do you have any odd/hidden talents?

Uhmm lots, one that surprises people is that I can do 17 different accents.

You’re in charge of a weekend long music festival. Who’s on your lineup?

Well the festival is more of a Cultural event than a Music festival, so there are Hula Hoopers, Dancers & Djembe/Drum workshops by Barefoot Caravan who will also be playing at Tasman Jude’s Album release party which is incorporated in the festival weekend.

Words cannot explain how grateful we are for your love and support. We tell you all the time and we’ll say it until we can no longer speak, sing or play… We love you. Thank you for everything. We hope ‘Green’ and all the music that we release in the future impacts you positively.