By Jordyn Armstrong on September 18, 2014@jordynhannah95 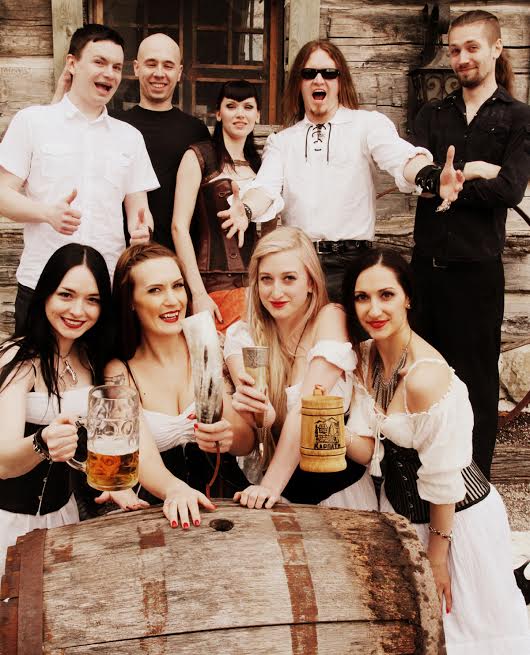 Martin D., Misha M., Ekaterina, Dawid Slowiak and Vodnik make up Toronto’s thrash metal band named “Protokult”. Recently, they released their newest album “No Beer in Heaven” on August 8th. “No Beer in Heaven” is a follow up to their previous EP “Marzena” and debut album “Ancestral Anthems”. We were lucky to get the chance to interview Protokult. So keep reading, metal fans!

Check out their newest video release for their single, “Get Me A Beer”:
https://www.youtube.com/watch?v=LY_ADjSWiK8

You have gone through a lot of sound and line-up changes. Do you think you are at a powerful front?

With this release, the lineup is more stable, talented and powerful than ever before and has been so the past 3+ years. I am really grateful and honored to be working with the musicians involved, their dedication and am somewhat surprised it’s taken this long to stabilize, yet am fortunate to have endured the many years of sound, member and soul searching!

To say stressful and depressing would be an understatement. When you live close to a big city, you would think it would be easier to find people but in actuality, finding the right “team” is one of the first steps. It’s especially difficult and aggravating when people don’t see your vision or connect with you. That’s why from 2004-2007ish, the nucleus was formed (original members) but Iooking back, I cannot call it an active/serious project. There were different lineups throughout this period and eventually I got fed up with all the bullshit: Drama, drugs, lack of talent, ego etc. I thought to myself, “I write the bulk of the material and if I can’t find anyone decent/committed enough, might as well do it and learn myself!”.

Many of you come from different backgrounds than just Canadian. How do you think your heritage affects your music the most?

When you have so many culturally diverse, rich personalities, I think it really adds a breath of fresh air to the group. Of course, we’re very proud to be Canadian since some of us were born here and others have lived here for over a decade and it’s our home but it’s important to remember and embrace one’s heritage. Let me illustrate this metaphorically: A cuckoo bird is born in a horses stable; does it become-is it- a horse? When we tap into our ancestry (Polish, Czech, Russian), we incorporate much of it into our music; so our goal is to whirl these influences into a sound that is distinctly ours, Canadian.

What would you say is the biggest influence that you convey through your music?

Passion (good or bad), history and power struggle. Everything I write, whether personal experience, historical reference, folklore, is very honest and although sometimes open to interpretation, captivating.

Which song of yours would you recommend as a first time listen?

The metal scene in Canada can be a bit tricky to work your way up in. Do you have any advice for other Canadian bands that are just starting out?

Practice your asses off and have a plan. Make sure everyone is on the same level and if they’re not, give them the boot. Be patient and learn from your own mistakes (or that of others) and be genuine with your work. Most (metal) audiences can detect bullshit. The scene is fairly widespread in genres, so don’t half-ass your performance I.E doing a show when the band isn’t ready for the sake of doing so. Eventually you will meet the right bands, people to work with and find your audience.

What is next for Protokult?

We will be promoting the record all over North America and Europe well into summer 2015. We plan on many travels and just getting it out there; many ears and eyes to infect! On top of that, we always try to keep momentum by practicing/learning new material. Work on two new songs has begun and they are blistering and energetic, more in tune with the first record to be honest. Additionally, we were asked to record a tribute song/cover for one of our personal favorite Ukranian black metal acts so we will spend a fair amount of time on that this autumn.

Do you draw inspiration from other bands? If so, which ones?

Not so much bands as life experience and nature. It’s quite rare these days to feel inspired by someone else musically, but when it happens, it’s a great feeling! Bands past and present that have sparked this include Arkona, Bathory, Dead Can Dance, Windir, Solstafir and Legend.

Why did you want to pursue a career in music in the first place? What pushed you to follow this dream?

I still don’t know whether to call this a hobby haha. I started studying guitar in my early teen years for the sole purpose of creating/ being in a group. I lived down the street from a fairly rough neighbourhood and was exposed to a lot of filth and negativity in my pre-teen years. If it wasn’t for music, maybe I would have ended up going down a different path and who knows where I would have ended up? To this day, it’s primarily therapeutic for me and that’s a big part of what keeps me going. Whatever I initiate and plan, I’m the type to see it fulfilled until completion. Keep in mind, a decade ago, everything wasn’t as fast-paced or digitalized as it is now, so the feeling and excitement was slightly different. People were more inspired and appreciated artistic determination and integrity. I witnessed the whole itunes digital domination and it left me in a confused, cold and dark place. But this is the way the industry shifted and artists must adapt. Eventually and inevitably, something else (different means/model) has to emerge and the industry shall and must collapse unto itself. Once the Protokult lineup had stabilized, we built a dedicated following, so we just kept at it. The industry has its share of politics and the road lifestyle isn’t as glamorous as people may imagine. All in all, we have too much fun doing it and enjoy each other’s contributions and company. It’s easy to become discouraged in this day and age, but when the love, original excitement and people connection all coexist, it makes it worthwhile.

What’s one thing fans would be surprised to know about the band?

Not everyone has a drinking problem=) Some members barely drink at all!

And as usual we throw in some fun questions for the fans:

Do you have any funny tour stories?

We were playing some dive in Hamilton a few summers ago with our pals Nordheim, Valfreya and a friend’s black metal project from Toronto. Throughout the night, I polished off a bottle of whiskey and at the end of the night was fuming in the parking lot, giving everyone a piece of my mind. This one friend of mine was sitting on the curb with his girlfriend and exclaimed, “You wanna be a big shot? Give me your best shot- RIGHT HERE!” and proceeded to point to the corner of his eye. I’m sure he wasn’t sober either but being in a stupor, you don’t always question or consider certain situations. A ghastly silence dawned on everyone in the parking lot and I looked at his girlfriend (for some reason) for approval. “You better do what he says”, she squeaked. So without further ado, with maybe three-quarters of my strength I swung down and decked the guy. He toppled onto the pavement immediately and the rest is kind of a blur. I remember him being dazed and confused on the ride back, questioning my intention and a stream of crimson running from a gash in his brow. Meanwhile, my drummer kept insisting I “punched” him the wrong way, hence the gash. Maybe I should have punched him instead=)

If each member of the band was a type of food, what would they be and why?

Martin– Polish Kielbasa- well-rounded, slightly heft and bulky with flavor that lingers on after consumption.

Ekaterina– vegetables (Cauliflower)- healthy for you but not everyone likes it. Stylish with health benefits.

Dave- Pumpkin pie- who doesn’t love pumpkins/jack-o-lanterns? He’s always smiling, hard to be mad at and pumpkin pie is best enjoyed lukewarm; not too hot, not too cold.

Misha– Meat and potatoes- very simple, fulfilling and to the point.

What is one word you would use to describe a typical Protokult show?

Thank you for your support, interest and hope to see you on the road!