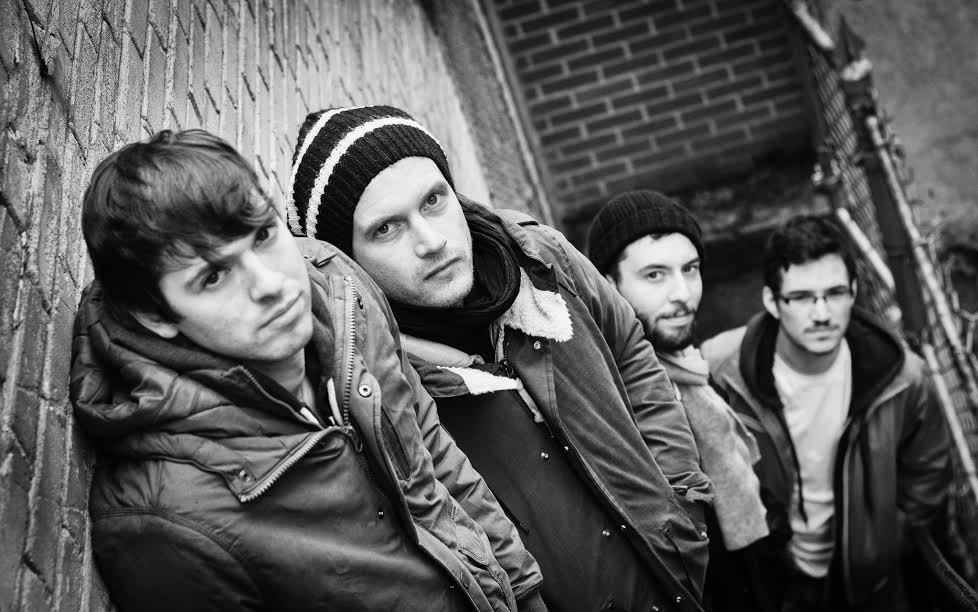 King Karoshi is an indie pop-rock band from Montreal. The band includes Rémi Denis, Patrick Dunphy, Alexy Guerer, and Antoine Poliquin. Their debut EP ‘Laundry’ was released on May 1st and is already turning heads in the Montreal music scene.
Want to learn more about this band? Check them out on their social media and keep reading the rest of this interview!

Patrick: Some of the songs existed in other forms previous to the band and some of them were created together. I write all the lyrics and melodies but as a band, we spend a lot of time in the practice space discussing directions for songs and fine tuning them. This allows for each member to sort of inject their unique talents and personality into them.

Antoine: Sort of like adding detergent to the dispenser of your washing machine, if we were all detergent and music was the clean laundry.

Patrick: I try to write about things that I’m frustrated or uneasy about; where there’s a tension I’m trying to work through or something I want to rebel against.

The songs in Laundry are kind of an exploration of the mundane. Basically, I was at a point where I just finished university, was entering into the ‘real-world”, out of the arrogance and self-aggrandizing world of being a student and just experiencing the loneliness and alienation of a 8 hour day-to-grind, seeing the same lifeless faces on the subway every day and wondering “Is this what the next 40 or so years of my life are going to be like?”

Who are your biggest musical inspirations?

Patrick: Too many bands really, but I could probably highlight Radiohead as my favorite band. They’re just so prolific and write so many great songs while constantly reinventing their sound.
Lyrics are important to me in terms of the bands I listen to. I really admire Thom Yorke, Isaac Brock from Modest Mouse, Frank Black from the Pixies, and Joe Purdy.

Antoine: For bands Radiohead, The National, Half Moon Run, The Walkmen, and then a bunch of folk-ish singer-songwriters (A.A. Bondy, Jesse Woods, Fionn Regan, Luke Temple…)

Patrick: Maybe, Edward Sharpe and the Magnetic Zeros, I feel like they would be cool people to hang out with for an extended with and we could try to convince to play miscellaneous string and wind instruments on some of our songs.

Alexy: Touring with Half Moon Run would be totally awesome…I’m sure our harmonies would improve a lot being around them!

Rémi: Yeah, I feel like we would get along well with them! I’d also love to tour with the Flaming Lips just because they have such a distinct universe. It must be surreal.

Patrick: We get that question a lot and I don’t think I’ve ever been able to give an answer that I was satisfied with. I usually say that the best way is to listen to it and figure it out for yourself.

Rémi: I think it’s very alt, definitely alt pop indie rock, but not too much.

Patrick: I would probably say Laundry, just because it was kind of the first song that we wrote as a band. It started out as more of a simple folky acoustic tune and it was elevated into something bigger through a collaborative process. Also, lyrically, it holds a special place for me.

Alexy: Tallest Pawn for sure!

What is it like starting out as a new Canadian band?

Patrick: As a Canadian band, there seems to be a good infrastructure available for those that seek it out. I think the government (although ever decreasingly) has a lot of good grants and opportunities available for those that are persistent. One drawback is that sizeable cities to tour in are quite far apart, especially compared to the United States and the UK, which is quite a challenge for touring and getting your name out.

In terms of playing in Montreal, it’s a city that loves music and there a lot of sources of support. There are so many great musicians here so it kind of keeps you humble, and there are small pockets of really vibrant musical communities if you’re lucky enough to stumble across them.

Do you have any advice for other bands looking to record/release their first EP?

Patrick: Don’t force or rush it. The most important thing is to make sure you have a good vibe in the practice space and as a band before you take it on. Also, don’t think that just because you’ve made the commitment to a record an EP means that there’s pressure to release it to the public in that format. Recording is an artform in itself and can be very frustrating and complicated. By all means bands should try to record as much as possible, but expecting a great result the first time out is unrealistic. We did an initial set of recordings earlier on in the year by ourselves that we expected to release as an EP, but after hours of arranging and editing we basically decided to put them aside and try again. It might seem like that was a waste of time, but it was a valuable learning experience, and eventually led us to achieving a better result the second time around.

Patrick: Right now we’re concentrating on writing new material and gelling more as a band to make sure that our live show is the best that it can be. The goal is to put together enough material for a full-length release sometime in the next year or two but we may release one or a few more EPs leading up to that. Recording is a humbling experience, and I think we’re in the mindset that we’d like to improve our chops as a band and maybe attract some skilled people to help us before we go all in with putting together a full length release. An album is definitely our goal, but we might not be ready yet. We’ve only been together for about a year now.

As always we have a few fun questions for you so your fans can learn a bit more about you:
What was the first CD that you bought?

Patrick: I remember in 4th grade, first three CDs that I ever bought myself were Offspring – Smash, the Space Jam soundtrack, and Sugar Ray – 14:59; quite an eclectic mix.

Antoine: Coolio – Gangsta’s Paradise. The music store clerk told me it was a really bad album while taking my money (why would you say that to a kid?)

Rémi: I suppose it must have been a Dire Straits album!

Patrick: I remember when Paris Hilton released a song (Stars are Blind or something), I actually didn’t hate it and mildly enjoyed it, at least insofar as it being one of those mandatory background songs you’re forced to listen to in malls and fast food restaurants.

Rémi: I do watch The Voice sometimes.

Antoine: How I met your mother, sometimes.

Antoine: Can’t answer that question! but any place without -40C temperatures would be interesting to try.

Rémi: These days, I would lean towards Indonesia.

Patrick: I usually go with Tighten Up by the Black Keys or Valerie by the Zutons. Sometimes when I’m drunk enough, I’ll go up and do a Blink 182 song mockingly, as I do quite a convincing impression of Tom Delonge. The trick is to whine a lot and add at least one extra unnecessary vowel in each syllable.

Antoine: I don’t know, but there’s a bar in Montreal called Les 3 Minots which seems to be an amazing place for Karaoke. There’s a bartender singing songs by himself, looking at the screen and playing tambourine, and you have to wait until the end of the song to order something – he might then comply half-heartedly or start singing another song. Middle Brother – Middle Brother would be a good song to sing in karaoke, but I doubt they have it at 3 Minots; and even if they did I doubt you’d have a chance to actually sing it.

Patrick: a pool cue, an eggbeater and an umbrella

Rémi: Who would you play with anyway?

Antoine: Well, Patrick or Alexy I suppose, unless they’re too busy beating eggs and wearing hats.

Patrick: Alexy’s cheating, he should only be allowed to bring one drum stick.

Patrick: Patrick Watson, Hey Rosetta, Half Moon Run and some local acts/friends of ours: Give me Something Beautiful, Painter’s Mind, Forgotten Fix.

Antoine: Radiohead at Parc Jean-Drapeau in 2008. Grizzly Bear opened the show under heavy rain, and just as Radiohead went on stage the sun pierced through the clouds and a rainbow formed in the distance – appropriately as it was during their “In Rainbows” tour…

Alexy: I was also at that Radiohead show (though I didn’t know Antoine at the time!) it was truly amazing. Another great show would be Peter Gabriel on his ‘SO’ reunion tour.

Patrick: I was at that show as well, and that’s definitely up there for me. It’s between that and Fleet Foxes at the Greek Theatre in Berkeley California.
Rémi: I wasn’t at that show, but I heard it sucked anyway… My favorite show would probably be by Icelandic band Múm, they really took me somewhere.

Patrick: Historically, probably one of “Missed the boat” by Modest Mouse or something off of Radiohead’s “Ok Computer”

Antoine: These days, “So Much Wine, Merry Christmas” by Andrew Bird (actually a cover of The Handsome Family)

Antoine: Off the top of my head, Xanadu or Smaragdine.

KK: Thanks for taking time to discover our music, we hope to see you at a show sometime and we plan on having some new songs for you soon!