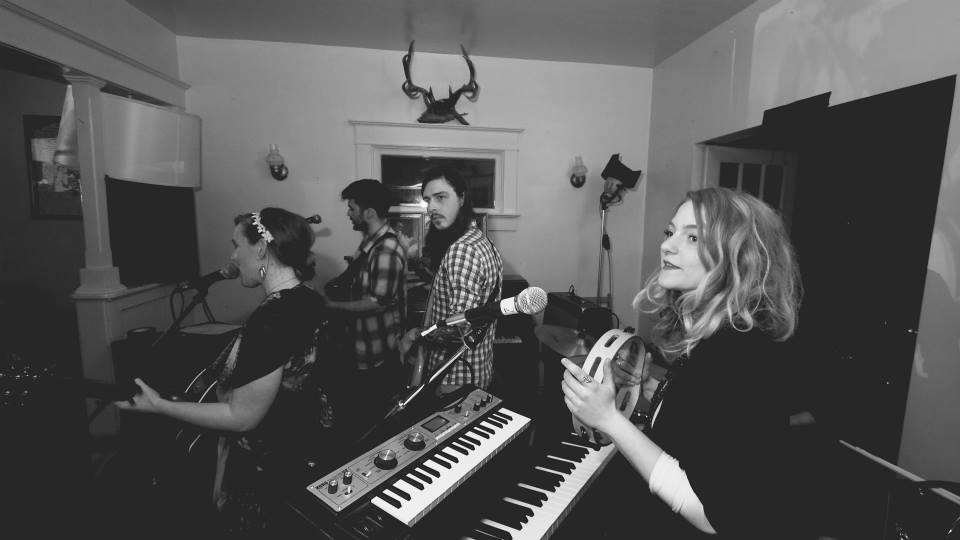 The Saskatoon rock/folk band, The Northern Light formed in 2012. If you want to know more about how they rock their folk, keep reading.

I was coming out of a long hiatus from music. I was in a fog for years suffering the vagaries of cocaine addiction, which consequently left me with no desire to touch my guitar. When I finally began scraping myself out of the pit I had dug, I figured music would be a productive way to spend the time I used to spend drugging.
It wasn’t long before I realized I had been ignoring the one thing that made me truly happy.
My roommate at the time was a trumpet player, Paul Adisi. After some cajoling I convinced him to jam with me and it clicked right away. We started playing on street corners that summer for fun and beer money. People seemed to really respond to the sound. From there my friend Alex, upon returning from South America, joined the project on keys, vocals and guitar. We had a drummer before too long and our friend Brynn Krysa, from the stellar Young Benjamins, helped us out on bass for a little while until we got someone in place (that’s Sasha Filipovic on drums and Tony Nickel slappin’ da bass!).

Where did the name “The Northern Light” come from?

I got the nickname Rory Borealis from a friend while we were listening to the Neil Young song Pocahontas, where he sings about the aurora borealis. In the early stages of the band, we were called Rory Borealis and the Northern Lights, but it started to seem weird after Alex joined because she was also writing songs and I didn’t want it to just be my show. We shortened it to Northern Light (without the S!) just to simplify.

How do you manage to incorporate two very different genres into your music?

It’s not like we set out to do it. Inspiration is a funny thing. You get sounds in your head — who knows where they come from? — and you just have to go for it. Sometimes it’s just a matter of learning some new chords, some jazz chords or something, and wanting to try them in a song. The consequence is that song will sound jazzy.

Music can also be a highly collaborative medium, so if I have a song that I’m bringing to the band and I’m playing it folky with an acoustic guitar, I have no idea how it’s going to change once everyone else adds their own parts.

What makes you do both, instead of sticking to one genre?

It’s not really a binary, either-or kind of thing. I’m prepared to incorporate more than just two genres in the mix. We’ve got songs that incorporate jazz and hip hop, not to mention pop, rock and folk.
So much has been done already if we don’t start smearing the lines between genres things are going to get boring pretty quickly.

Do you plan on going on any tours soon?

We plan on heading west once we release our eponymous EP. We’ll hit Edmonton, Calgary, Vancouver and points in between over a couple weekends in October. Then hunker down over the winter and record all the new stuff we have bouncing around, hopefully ready to release them and hit next summer’s festivals.

As I mentioned above, I realized it was one of the only things in this world that made me feel truly happy and fulfilled. Why wouldn’t you pursue that?

I love the funk, creativity and inimitable goofiness of David Byrne.

I’d love to work with David Bowie. He’s a fearless and innovative songwriter, and I bet he’s very charming and full of amazing stories.

Anything that stirs up emotion — the old cliches like heartbreak, new love, fear of the unknown — it’s pretty straightforward. One time I had a really bad writer’s block so I wrote a song about nothing, just getting up in the morning and making tea and toast; walking down the street listening to the birds. It’s called Mundane, and after I wrote it the block was gone. You can hear it on our bandcamp: http://northernlights.bandcamp.com/track/mundane .
*Disclaimer: This song is deeply folky, close to country even, and is not representative of our sound.

Now we like to add a few fun questions for the fans:
What are some of your guilty pleasures?

When not writing or playing music, what kinds of things do you do for fun?

I like chilling out at the beach, dance parties and riding my bike.

If you could go back in time, which era would you choose and why?

I would never go back anywhere. Now is the time.

Would you like to say anything else to the readers/fans?

Be good to yourselves, and each other. I stole that from Jerry Springer. Have a nice day.