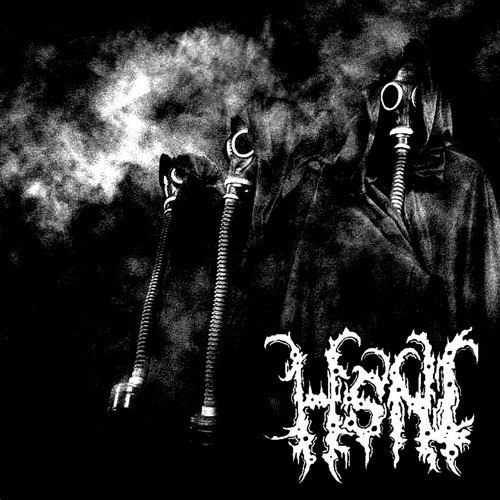 Canadian death metal band, H5N1, is probably one of the most mysterious bands out there. They have very little internet presence with only a bandcamp site and only pictures of three gas masked people. They once had a website, which is now removed. However, that does not matter to this band, as Mr K, Mr. D and Mr. M believe that it is the music that matters.

Why did you choose the name H5N1 for your band?

Basically chosen because of an interest I have in apocalypse scenarios and plague. I work in the health industry and see a variety of illnesses and the concept of a plague to ravage mankind was interesting to me at the time. Of course I advanced the plot and added the concept of domestic evangelical terrorists being the root of the outbreak and tried to tie religious themes into graphic descriptions of the viral endgame.

Why do you decide to keep your identities a secret?

Partially because we didn’t want our past bands to influence what people thought of this band and also because we don’t care for ‘glory’ or whatever. I personally do what I do for me and I don’t need to be applauded by anyone other than myself to happy with it. Not that I am ever really that happy with anything.

Do you think the secrecy makes you able to release things you would not have if people knew who you were?

Not really. In fact we would probably be more known in the scene and more popular if people knew who we were. That’s just not what we’re all about.

Do you ever see yourselves releasing your names in the future?

I don’t see the point in it. I have never used my real name in any band I have ever been dating from back when I was just a kid doing Death Metal in 1990 until now.

How does this choice affect you while playing music?

No effect that I can think of. It’s kind of a close knit scene in Toronto so when or if we do play everybody knows who we are anyway. For those who don’t know us I don’t see it mattering. It’s the music that’s important. Not whoever is playing it.

Do you do any live shows?

Just one so far. At present we have moved on to a different project, with a few different members, under a different name. We like to switch things up as we get bored with the same thing over and over. H5N1 will most likely return after this project sees the light of day. It is close to being ready to go and it’s a bit different than H5N1 but still deeply rooted in the Black/Thrash/Metal underground.

Do you use the music to say things your identities couldn’t?

I have in the past. Not really anymore. I am old now and really don’t care what anyone thinks. A lot of what I write is pretty politically incorrect. Whether I write against religions or am mocking things I deem mock worthy, if I feel it then it will happen. Who I am is meaningless. I don’t really get too caught up in it. It’s only a name after all. Whether I call myself Mr. K or John Doe what does it matter? Either way a majority of the world has no clue of who I am so what’s the point. Besides it is good to just let each individual project stand on their own merits and not have those ‘featuring members of blah, blah, and blah’ stickers attached to snake people in like a sales pitch.

What is the main inspiration behind your album “A Time of No Tomorrows”?

It was an imagining of a doomsday cult who decided the end of days would be unleashed unto the Earth, thus purging what they see as sin, by infecting themselves with a lethal pathogen and actively trying to spread it. It’s meant as a kind of a metaphor on how religion is in this day and age and how it works like a disease. It kills more than it cures and it spreads. Most who fall under its yolk and doomed to a life of no free thought or in worse case scenarios, become what I see as the true evil in our world. I know these themes of apocalypse and plague are all too popular in the media and entertainment industries now but we did these tracks back in 2009/2010. Back then the whole plague and zombie apocalypse trend hadn’t taken hold yet.

Better than I thought to be honest. It’s not like we ever tried to push our name out there. We gave everything away for free before it was the thing to do. Good reviews are nice but in the end they don’t matter. All that matters is what we think. I am so-so on all of it now but I usually hate everything I have ever recorded after the initial buzz of it being new has worn off.

Where did you come up with the name for the album?

Just something that rolled into my head when thinking of wordings to reflect the end of days.

I would probably make it more community based. Almost like back in the hippy days and less corporate. I direct that more to mainstream outlets as the underground has its share of collectives. I always liked the concept of like minded individuals starting their own scene based on similar ideals and sound. That in itself is more natural and organic than having a bunch of business suits deciding what the music buying sheep want based on demographics and sales projections.

A lot of bands are connecting with fans through social media. You don’t see this is as important as others. Why?

I guess because of our background. We mostly came from the extreme Black & Death Metal spectrums and thusly never really cared about press or fans. We were never about sales or anything like that. A lot of what we recorded was given away for free, so garnering fans by whoring never made much sense. Maybe that will change but not from me. I am fairly simple on what I do on the interwebs and that stuff isn’t my thing. If someone else in the band wants to do then by all means but I guess everyone sees it like I do.

Growing up in the late 80’s and early 90’s and seeing local bands like Overthrow, Sacrifice, Slaughter, etc. playing shows. I was in high school with some of them and knew some of the rest through parties and what not so I thought, well if they can do it then why can’t I? So I learned how to do it and went through some rough days with some shit bands and finally hit up some good stuff with some good people and I have been fortunate enough to have been doing music with them off and on for up to 20 years now.

Too many to answer. I like everything. I like various Metal genres to Americana to Punk to Hardcore to Folk to weird stuff. For H5N1 I know we were big on 80’s Death Metal and some bestial Black Metal. I am big on Blasphemy, Teitanblood, and other such bands and I brought that in but everyone has their own influences and adds them in.

We like to throw in some fun questions into our interviews for our fans, so here they are:

If there was one band in history you could collaborate with, who would it be and why?

Probably Order from Chaos. I always loved that band and Pete Helkamp is a lyrical genius.

What is your favorite lyric ever written and why is it your favorite? It doesn’t have to be by you, it could be by anyone.

Lots of lyrics resonate with me from all types of music. I find a lot of value in much of what the underground Country/Bluegrass/Americana bands are doing right now just as much as the more extreme types of music I hear. There are far too many to choose so I will just toss in this one from Christian Williams that relates to the end time theme but in a superb Gothic Country way: “When the skies open up and fire rains down don’t worry, I’ll be by your side. When the streets start to flood from streams filled with blood, oh honey – I’ll keep your feet dry. Oh, it won’t be long ‘fore everything’s gone and we only have memories and lies. But if I want to see the sky or the sea I’ll always find both in your eyes. ”

But honestly it’s impossible to pick just one. My mood and tastes at any given time would reflect my favorites at any particular moment. Right now I am into Chelsea Wolfe, Joy Division, and old Black Flag. I find them all worthwhile lyrically even though they are all so different.

Is there anything else that you would like to say to your fans?

Keep your eyes open for the new project. Details will be available soon. Probab