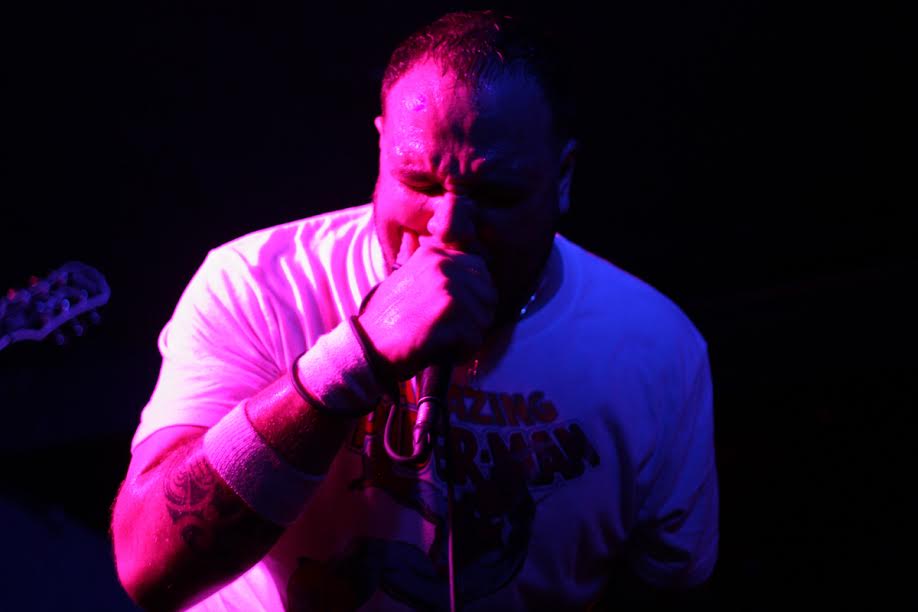 Harangue is a metallic hardcore band from Toronto. Dave Caporale, Masazuni Mitsuno, Danny Panzini, Jules Parris and Michael Kopko make up the band. Their most recent EP, “By The Strength Of The Mighty Atlas” was released on June 21st. If you want to find out more about this band, I suggest you keep reading.

On your Facebook page, you give a definition of the word “harangue” but why did you choose it as a band name? Does the description, to you, relate to your sound?

The first time I heard the word “harangue” it was used by a friend. the word intrigued me (Michael, vocals) as I had never heard it before. Being a curious person, I looked it up in the dictionary. Coincidentally around that time I was starting the band and no one had an idea for a name. The word harangue stuck with me because of the power and uniqueness of the word, it’s a word that isn’t used often. I read a few definitions of the word and the one that resonated most strongly was “a passionate performance in front of a large crowd”. It just made sense to name the band Harangue based on that definition because I knew that’s exactly what we would bring, a passionate performance. Now as for the large crowd part, we’re working on that!

It’s a long convoluted story. Let’s just say I tried my hardest to get the best people together, Harangue is my passion project. What started as “my” band has become something which is greater than me, it’s now us.

What is the main inspiration behind your songs?

First and foremost, to go against McLuhan, the medium is not the message, at least not always. Although Harangue songs are aggressive by sound, lyrically I’ve drawn from politics, philosophy, proverbs, and obviously personal triumph and tragedy. As for music, we’re definitely trying to be dynamic and creative, but I try and push us to be progressive while being aggressive AND heavy- I feel too many bands are trying to be heavy but are losing urgency or aggression while others are the opposite, aggressive but not heavy. I guess those are parallels of metal and hardcore that I really want to combine but I want mostly nothing to do with the metalcore of today. I feel more akin to the early days of “metallic hardcore” when there wasn’t the term “metalcore” and people didn’t know what to call it. I feel Harangue is much more Coalesce than Killswitch Engage, more Botch than Bring Me the Horizon, more Turmoil than Trivium, despite possibly finding all of these in the same section at a music store. (sidenote: does anyone go to those anymore?)

You say you’re “not afraid to wear their influences on their sleeves”. What bands do you think you have with you the most?

Some of the weirdest comparisons I’ve ever gotten was that Harangue sounds like Cursed meets Dillinger Escape Plan after one of our sets which I don’t think is very accurate. Another time we got Helmet meets Vision Of Disorder which is funny to me personally because I’m the only one in the band that likes those 2 bands. One of my favourite comparisons was Achilles (please reunite) meets Burial Year who are both amazing! I’ll say the biggest influences that are obvious are Converge (I know, very bold) and Coalesce.

Do you have any touring planned for this EP?

Once we get some issues sorted you’ll see us live. Bet on it.

Nahhh, social media sucks dude. We’re just gonna blast Harangue jams so god damned loud that people will just hear it that way and gravitate towards us. And you know, bandcamp.com

I’m always writing lyrics but they are nothing but words (poetry?) until the song is all done. I make my lyrics fit the music. It’s all about the vibe I get when hearing the finalized song, then I plug in the appropriate lyrics.

Why did you want to pursue a career in music in the first place? What inspired you to follow this dream?

All logic (and my mom) tells me to not be in a band but any time I’m without a band I have an inherent need to express myself making music. I’m just drawn to music, I can’t stop it! It’s truly an addiction and I’m totally ok with it. I’m not kicking this habit any time soon. Once you get bitten by the band bug I don’t think there’s a 12 step program to get you well again. Hi, my name is Michael and I’m a music addict.

What advice would you give to someone trying to break out in the music industry? (Especially in the more hardcore/metal scene)

Be as unique as you can be at all times. There’s no place for corny, cliche, bullshit, especially in hardcore and metal. Don’t limit yourself but don’t try be something you’re not.

We like to throw in some fun questions for the fans to get to know the bands better. So here are a few:

What artists/bands do you think are your guilty pleasures?

For me, I’ll say Justin Timberlake and Beyonce even though I’m not an RnB guy unless it’s Motown from the 60’s and 70’s. They just make amazing pop music! Jules will admit to Feist. Dan, well, most of what he listens to is garbage. I don’t want to admit to what he likes except for Rush, probably his favourite band. He isn’t much of a hardcore guy but loves playing it. I’m converting him slowly!

Do you have any secret talents?

Jules is a graphic design wiz, Dan can build almost anything out of bricks and wood, he’s also an amazing dad. My brain is full of useless info about wrestling, comic books, and movies. I can also use my finger to make pens do backflips. I’m a hell of a cook too.

Which of your songs would you say best represents your band?

Tough one. It’s between “The Engine” and “Familiar Face” listen to both, just those 2, and you’ll learn why.

We have fans? If we do then use your brain and stop listening to bad music.