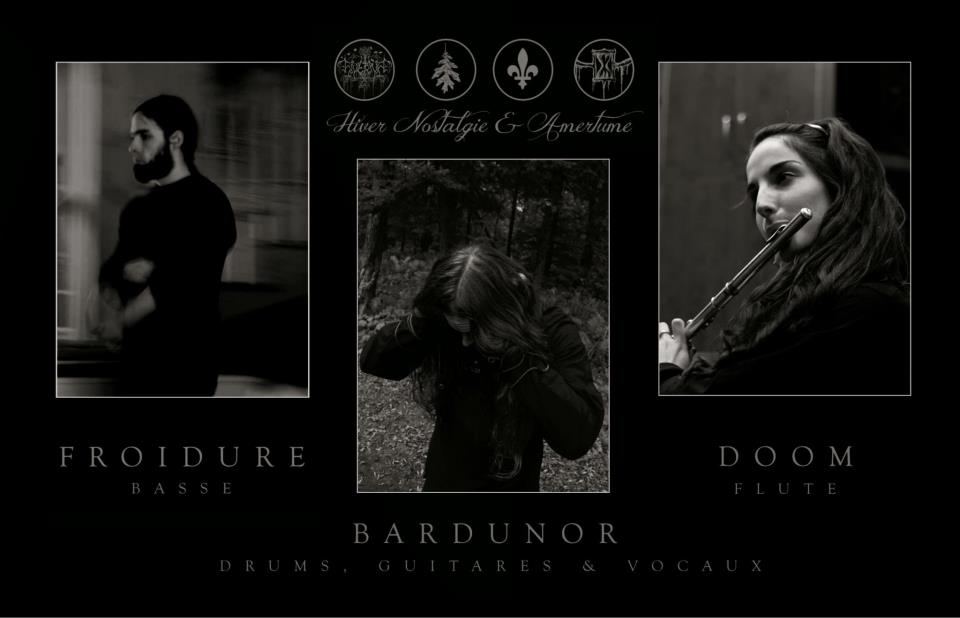 I recently had the chance to ask Hiverna, a folk black metal band hailing from Quebec a few questions about their background, future and their album, “II. Macabre”. Keep reading to find out more.

This project started as a one-man-band in 2004. One of my good friends, Helorth, took on the guitars that same year. On the run, we met some interesting folks that joined the project too, leading to a complete line-up permitting us to perform live. Some were long known friends, like Froidure on the bass, and some others, like Doom, on the flute, we met along the way.

Folk Black Metal is a genre that I have never heard of, how did you decide to combine those genres?

I’ve always been attracted to extreme music for its true and raw sound, but I also always have been fascinated by the omega of nature, the old ways of things, ancestors and traditions. Quebec’s folkloric music has a lot in common with celtic music and I think that’s why, even if I were mostly into Death Metal in those days, I began writing folk/metal songs. Blood speaks.

You use a variety of instruments in your music, including flutes and mandolins, why do you stray from the normal “metal sound”, what are the reactions like from traditional metal fans?

That’s a good question. I think that firstly, Hiverna is not necessarily dedicated to ‘’conventional people’’. I believe, even with a certain outburst of folk bands in Europe, here, in Quebec, Hiverna is a bit of a thinking outside the box. I never intended on following crowded paths, I just concretize musical ideas that are in my head since youth. Strangely, it seems that Hiverna blends well with the other bands of our scene like Forteresse, mostly due to the focus on nature and tradition.

For Hiverna, I only play guitars, vocals and drums. In my acoustic projects (Chemin Faisant, Demain Wendigo), however, I also play flute, keys and percussions. With the addition of violin on II.Macabre, I would certainly be interested to widen the range of instruments for the next album with, for example, accordion and bombard.

You released your first CD, “L’Aube Septentrionale” in 2008, followed by your debut album, “I. Folklore” in 2010, and finally “II.Macabre” was released June 17, 2014, does the sound on the new album differ from the previous?

In my opinion : very much! We always have done everything ourselves and I cannot say I’ve always been satisfied with the sound of our albums. But back then, I think I didn’t care so much. Now, with II.Macabre, I think that for the first time, one of our releases sounds exactly like intended. A big HAILS to Ekinox who rocked the mixing and mastering.

There are 12 songs on the new album, what song would you recommend to someone who has never heard you?

Where do you tend to pull inspiration from when it comes to your music?

Hiverna’s songs were written a long time ago when I wasn’t really listening to Black Metal or Folk music, but I think everything that sounds like or link to nature, forests, mountains, etc, have always overwhelmed my world, and thus, reflected on my creations. But if we look at the musical influences I got during the last ten years or so, I would name projects like : Paysage d’Hiver, Ulver, Summoning, Eros Necropsique, Aes Dana, Elend, Lunar Aurora, Enya, Howard Shore, etc.

Can fans expect a tour along with the new album?

We are currently working on building a new line-up to perform live with Hiverna. When will it be ready to tour? I’d say 2015. As I do not really do massive publicity, all will depend on the spreading of the music across the world by people or social media. But let it be said, I would be honoured!

If you were to put together a tour featuring yourselves, along with 2 other Canadian bands, who would you choose?

Most likely : Monarque and Forteresse.

I’d say Patrick Watson. I really appreciate his work and also his collaborations with the Symphonic Orchestra of Quebec and other projects like Cinematic Orchestra. If you have time, look into it, it’s worth the time.

Is there any thing you’d like to say to your fans?
Thanks very much for your support! For independent music, that’s everything! Go in the forests, have a good life and have a good death.