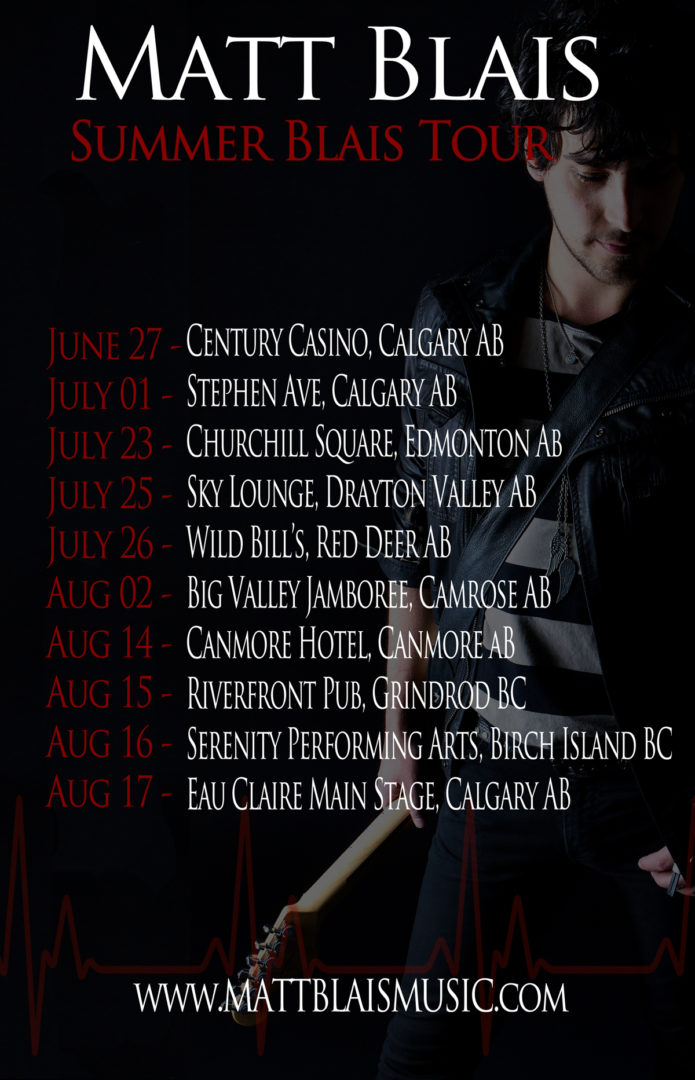 Matt Blais is a rock/blues artist from Calgary,AB. Matt’s rock and roll with soul blues music has gotten him success. Matt has gotten a lot of positive words on his album ‘The Heartbeat’, which is available here: http://mattblaismusic.bandcamp.com/album/the-heartbeat Matt is embarking in the Summer Blais Tour currently.

Keep reading to find out more about Matt, ‘The Heartbeat’ and more!

MB: The top of my list is probably Sam Roberts. Great songs and a great live show and he and the band consistently put out great records that push the boundaries of what people expect. Sam has that work ethic I think all musicians should have. He’s not afraid to hit the road and play show after show leaving it all out on the stage each night. I’ve really modeled myself after that. I’ve actually submitted a song in the hopes of working with him this year. Readers can check it out here: http://mysongforchange.com/entry/6979636

MB: I’d love to see a massive festival of Canadian artists get put together and have it tour across the country, maybe by train, like “Festival Express.” Sam Roberts and the Tragically Hip of course. Oh! and Matt Mays – his latest record ‘Coyote’, I think, has got to be one of the best I’ve ever heard. I’m a big fan of a band out of BC called the Matinee. There are so many great artists and bands from this country it’s hard to choose, but if anything like that ever happened, I would be honoured to be a part.

MB: It wasn’t an “AHA!” moment for me. I became a musician very gradually. It started out as just a fun thing to do with a few friends, then the show got bigger and we even made a few bucks. It wasn’t until we started doing shows on the road that I said, “I could really get used to this.” Next thing I knew, I had played all over and didn’t have a day job.

MB: Right before highschool was when I got my first guitar. I was into writing and poetry, so I started putting those over the first few chords that I had learned and then, voila.

MB: The song “Running” was probably my favorite to write. I actually wrote it with (keyboardist) Sean Peters for my first record. But, it really didn’t fit with the rest of the tracks. It was too edgy and rocking. So, it really represents the shift in my career when I wanted to be more energetic and in-your-face. My fav to perform really depends on the show but, when the crowd is sweaty and rocking out with you, it’s gotta be “Set the City on Fire.”

You are currently on the Summer Blais Tour, which show has been the most energetic so far and which upcoming one are you looking forward to the most?

MB: I’m really looking forward to the show in Edmonton. It’s a great line-up of bands, and that’s a city we haven’t been to in a while. Got some great friends there!

These next few questions will help your fans get to know you better, do you have a favourite childhood memory?

MB: I’ve always been a big baseball fan, and I have a memory of my dad sitting me down when I was a kid and giving me this big talk about life and the world and how to treat people – He framed it all in the context of baseball when he told me about Jackie Robinson (the first African American to play in the major leagues) and he talked about the courage needed to stand out and to do something great in the world. How life is about overcoming adversity. I’ve applied that conversation to almost every situation in my life.

MB: Matt Mays – Coyote . . . I think it’s already pretty much the only thing I’ve listened to since it came out.

MB: Haha, good question. That’s tough – but right now, I’ll say. Joel Plaskett – Blinding Light. It’s hard to describe life on the road to someone who hasn’t done it. This song comes as close as possible: “caught in between ambition and love”

MB: I consider myself a jack-of-all-trades master-of-none sorta guy. I do some work in the film industry and am ok with a camera I guess.

MB: I’d like to say thank you for the support. A career in the music biz is a though thing to maintain and I couldn’t dream of it without you. Help keep indie rock alive and I look forward to seeing you on the tour.