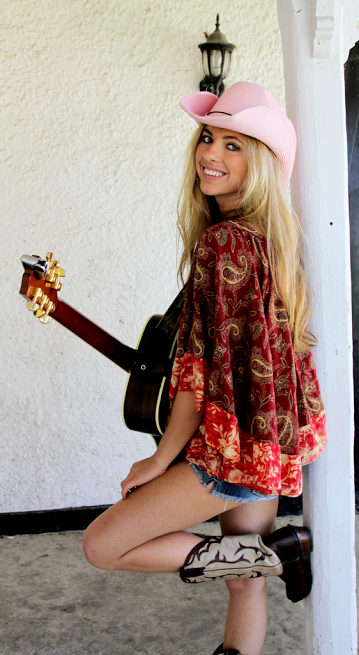 I recently had a chance to ask Canada’s newest up & rising country star, Kate Todd a few questions during an email interview. If you want to know more about this awesome new Canadian artist, continue reading!

When did you decide you wanted to pursue music as a career?
KT: Music actually came first for me. I have always loved to sing and I have studied music all my life. I started playing piano at an early age playing recitals at our Church and continued with piano into high school where I took up the French Flugelhorn in band class. My background in music actually helped me to land my first lead role as Lily Randall the free spirited singer/songwriter ‘Shadylane’ on Radio Free Roscoe. From that point I switched to guitar and that opened many opportunities for me to focus my attention on pursuing music professionally.

You previously starred in hit television show, “Radio Free Roscoe” as well as Disney’s “My Babysitters A Vampire”, what made you change directions from acting to music?

KT: I wouldn’t say I’ve changed directions as I hope there are a few more roles out there for me and I’m excited about a new project I’m involved in now but unfortunately not at liberty to discuss in detail. I am certainly proud of my acting career, the many fans I have made and the recognition I have received through acting, however music is gratifying on a more personal level. It’s my work, I created it, I wrote and performed it and that brings me a lot of joy and if people connect with it that’s bonus!

Your first album, “Finding My Way” was released in the spring of 2012, how was the response for that?

KT: Finding My Way was released independently and spawned three singles to Country Radio and was voted Best New Album of 2012 by the Radio Nation Music Awards. It also nominated me Best New Artist at the Country Music Association of Ontario Awards. All in all it was very successful in lieu of the fact it had virtually no budget or promotion.

You are heading to Nashville to put the finishing touches on your upcoming sophomore album, what can you tell us about that?

KT: FMW will always have a special place in my heart being my first album but these next recordings will reflect a more roots based country sound.

What made you choose “Hey Day” as your first single from your upcoming album?

KT: Hey Day is a straight up, feel good, kick back summertime song. The decision was made on those grounds and the timing felt right. It was just that simple.

How has the response been from this single?

KT: Response has been great. People seem to connect with the whole having a Hey Day vibe and it seems catchy enough to have a few even sing along to the chorus when I play it live.

You are scheduled to release the official video for your single “Hey Day” has the video been recorded yet? If so, what was the highlight of shooting the video? If not, what are you most looking forward to with shooting this video?

KT: The video hasn’t been shot yet although a treatment has been received for the production and I’m looking forward to shooting it on my grandparent’s farm.

You have some upcoming show dates confirmed in Ontario, can your fans expect a Canada wide tour anytime soon?

KT: Nothing confirmed but if the opportunity presents itself I’d love to tour Canada and have the chance to get out and meet the many kind, wonderful and amazingly faithful fans who have followed along on this musical journey with me.

If you were to put together a tour with all Canadian acts, who would be your openers and co-headliners?

KT: There are so many amazingly talented Canadian musicians! It would be an absolute dream to share the stage with the legendary Neil Young or Joni Mitchell. Both artists have been a huge influence on me as a musician.

During our interviews, we like to include a little “fun” portion that may help your fans get to know you a bit better, so here goes:

KT: Going for a hike in a forest trail or chilling out somewhere quiet in the countryside.

If you could do a duet with any Canadian male artist, who would you choose?

What is your all time favourite movie?

KT: The Mask or Country Strong

If you could write music for any TV show, which would you choose?

And last but not least, is there anything you’d like to say your fans?

KT: Your loyalty means so much to me; thank you for your ongoing support! You rock!!