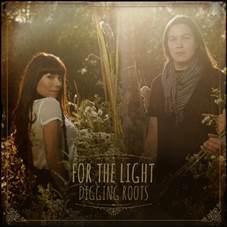 Ontario band Digging Roots are set to release their third album, ‘For The Light’, on June 17th. The group won a Juno in 2010 and are four time winners of Canadian Aboriginal Music Awards. The group is made up of Raven Kanatakta and Shoshona Kish with Trevor Mills and Paul Brennan. The album, a 12 song release, has a mix of different sounds making it very unique, especially with the songs being sung by both male and female leads.

My favourites off of the album would have to be “All Night”, “It Won’t Be Long” and “Sunshine”, which have more predominant male vocals. And “Stay”, “Rich Girls” and “Hwy 17”, which have more of a female lead.

Overall I was impressed with the album and the many different styles they combined into it. I was unsure at first with their influences ranging from Neil Young and Bob Marley to Hendrix and Led Zeppelin, but they make it work giving it a unique twist to folk music.