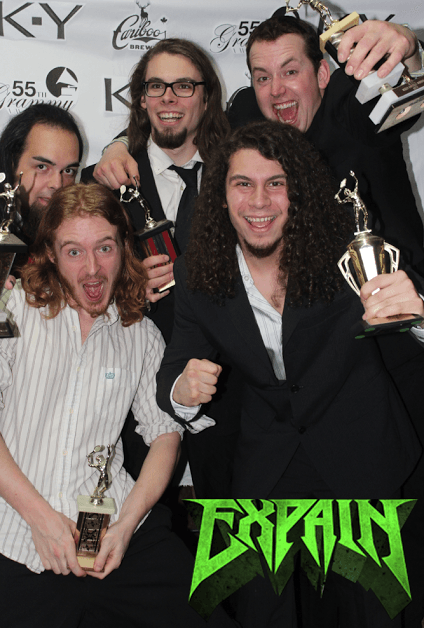 Expain is a multi genre band from Vancouver. Their sound has been described as a combination of thrash, punk, jazz, classical, world, pop, and country. Their performances are also said to be in a comedic way. These heavily influenced musicians are Daniel Brand, Pat Peeve, Eric Morrison, Nikko Whitworth, and Ryan Idris. They are set to release their debut album on June 24, called “Just The Tip”.

Okay, so I have to ask. How do you combine so many genres into one band?

E:  Well I’m not too sure that we fit much country or world music into our sound, at least not that I’ve noticed.  We have used an occasional exotic scale here and there which may remind the listener of some type of world music but it’s certainly not something we think too much about.  I also think the pop influence mainly comes down to our emphasis on songwriting and trying to find a melody or hook in our riffs; it’s all about getting a tune stuck in your head.  Ultimately, I don’t think we try to blend any genres or anything like that but we have such varied influences that it just sorta happens.  All we really want is to make music that makes us happy and is fun to play.

What genres usually come out more in the sound and which normally stay in the background so to speak?

E:  Jazz definitely makes its way into our music, whether it’s in the clean interludes or the harmonic complexity underlying the riffing or soloing, I think that is the most noticeable genre that we blend with metal.  I’ve personally always been a fan of chromaticism and interesting or unusual chord changes and jazz is full of those things.  Various styles of punk and metal are in everything that we play because that’s what we all grew up being passionate about and it’s what we all came together to do.  The other genres tend to be more subtle and entirely based on individual interpretation.  People hear all kinds of different things based on what they’ve trained their ears to pick up on which is really cool but not something we focus much on.

On your Facebook you say that you can appeal for “the most discriminating tastes”. Can you explain when and who you have unexpectedly appealed to?

E:  We’ve played some unique shows, lineups, and venues that don’t seem like they would be metal friendly.  We have played to a asian karaoke crowd at a local night market, we have played to an electronic dance music crowd at a basement dance party event, we have played to a straight ahead punk rock crowd at a house party, even a classic rock crowd at a fancy restaurant… the list goes on and on.  At every one of these shows there are always people that approach us with, “I’m not into that ‘heavy metal’ music but…” and go on to explain how they found something to enjoy about us.  Many people have even complimented us on our videos, such as our cover of John Lennon’s “Imagine” or EXPTeeVee, even though they do not listen to metal.  I think anyone with an open mind that is willing to give us a try can find something to enjoy or appreciate about what we do.

Where did the idea for “Just The Tip” come from?

E:  We were doing an interview with the good folks at Sleeping Bag Studios and talking about our troubles coming up with a title for the new album when “Just The Tip” came up.  The idea was not much more than a dirty joke surrounding the phrase “tip of the iceberg” which was relevant because it is our first full length album.  Since we could not agree on a better idea and we all have a terrible sense of humour, we decided to make it official during that interview and keep “Just The Tip” as the name.

Is your single “Aggression’s Progression” a good indication of the rest of the album?

E: For sure.  There are faster songs and slower songs than this one on the album; “Aggression’s Progression” fits nicely in the middle.  It has many good examples of the types of riffs, solos, and arrangements that take place on the rest of the record.  That being said, there is a lot more on the record than what any one song can offer.

What kind of show do you guys put on?

E:  When we get on stage we try to be as high energy as we can.  We like to headbang and run around and flail like diabetics in a candy store.  We try to give our audience every bit of energy that we can possibly muster and if we are doing it right then they may choose give some back to us.  We often have some silly banter or stage antic or something that differs from show to show, which is the comedic element that was previously referred to, but they are usually spur of the moment improvisations or poorly thrown together shenanigans.  We basically just have fun on stage and then people laugh at us or get involved somehow.  We never really know what crazy idea will pop into our heads next so our fans never quite know what to expect from us other than a fun and energetic set.

Where can fans best contact you if they want to learn more or explore your sound?

E:  We do check our facebook regularly (www.facebook.com/expainmetal) so we will answer your facebook messages.  If we don’t get back to you right away it’s not because we don’t like you, it’s just because we are busy and we will reply as soon as we can.  We can also be reached by email: expmetal@gmail.com.  If you are looking to explore our sound or just get to know us a little more, we will put the album on our bandcamp (www.expainband.bandcamp.com) or you can see our YouTube series “EXPTeeVee” and many other videos on our YouTube channel, www.youtube.com/channel/UC3­L8­ht5aEyGz7bclnoiwA

Do you plan on doing any touring soon?

E:  We are planning to go across Canada for a Summer 2015 tour.  In the meantime we are aiming to take on some Western Canada dates in Fall 2014 and/or Spring 2015.

What’s next for Expain after the album is released?

E:  Once the album is out we will be saving up money to make more merch and vinyl and things like that.  We have some great shirt ideas and a hoodie design that looks killer and shouldn’t be too costly.  We will also be trying to make new and fresh videos on a regular basis.

As usual we throw in some fun questions for bands to share a few things that the fans may not know about you.

What bands are your biggest influences and inspirations?

E: We all have so many influences and inspirations that it’s hard not to make a mile long list.  So we will just name a few off the top of our heads…

Top 3 bands you would love to tour with?

What are your guilty pleasures? (Musical, food, etc. )

Ryan: We can hold a conversation at urinals
Nikko: We are all heterosexual
Pat: We think
Dan: we don’t drink
Eric: Yes we do so.

E:  We really appreciate all the support we’ve gotten and continue to get from all of you, our fans.  We are very fortunate to have friends like you in our lives.  We also love hearing from you so feel free to give us a shout any time and let us know what’s on your minds.  In the future we will be doing our very best to continually bring you entertainment and we cannot wait to see all of your smiling faces at our shows.