By Remington Fioraso on June 11, 2014@https://twitter.com/RemingtonFD 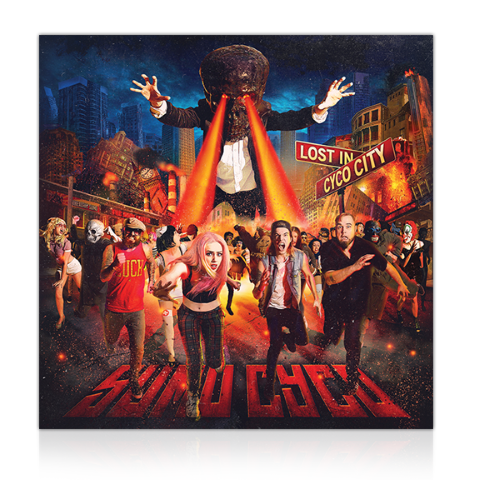 Toronto’s Sumo Cyco is a four-pieced, female-fronted hard rock band consisting of Skye ‘Sever’ Sweetnam, Matt ‘MD13’ Drake, Ken ‘Thor’ Corke, and Andy ‘The Wolf’ Joseph. They released their first full-length album entitled “Lost in Cyco City” on June 10, 2014. The album contains eleven tracks, including the singles “The Ugly”, “Go Go Go” and “Cry Murder.” It is available on iTunes for a digital copy or their merch store or your local Canadian retailer for a physical copy.

After hearing of the release date for “Lost in Cyco City,” I was highly anticipating the album as I enjoyed their releases prior. When listening to the album, I was not disappointed. The vocals and instrumentals were well done. From the first track, “The Ugly” to the final “My Name is Rock n’Rock”, there is not filler tracks. Although difficult to choose a favourite, I have found myself replaying “My Name is Rock n’ Roll” and “Cry Murder” the most. It was well worth the wait!

If you have not listened to Sumo Cyco previously, I would highly recommend listening to the singles “The Ugly”, “Go Go Go” and “Cry Murder” prior to listening to “Lost in Cyco City”. If you enjoy them, I would definitely check out the full album.