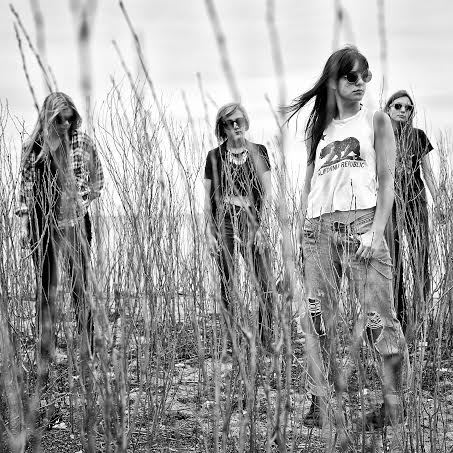 The Beaches are an indie rock band based in Toronto, Ontario. The band is made up of Jordan Miller, Kylie Miller, Eliza Enman McDaniel, and Leandra Earl. I had a chance to do a email interview with the band, and i’ts your lucky day because today is the day that the interview goes public, keep reading to find out more.

How did you meet/ form the band?

TB: Jordan and I started playing together when we were really young (around 6 and 7). Eventually we decided we wanted to start a band. We made one with some boys and we called our band SOB (sisters, others and brothers). Eventually we decided we wanted to have an all female band. We asked Eliza to join because we knew her from school. In January of 2013, when our other member Megan quit, we phoned Leandra and asked her to join too.

You named the band “The Beaches” after the area of Toronto where you live, did you have any other choices when you were choosing your name? What were they?

TB: Finding a good band name is so difficult! We definitely wanted the word “beach” in our band title, so we tried Skeleton Beach and Broken Beach. However The Beaches seemed like the best choice.

Up until now in your music career, what has been the highlight?

TB: I think we’ve had some amazing times as a band. I think our two career highlights were going to SXSW and touring the UK for 3 weeks. We learned a lot from both experiences.

You released your album “Heights” on May 6, how has the response been so far?

TB: It’s been amazing. Everyone has been really supportive. MTV Iggy in the UK just started playing our video for Little Pieces which is so cool.

When it comes to writing songs, from where do you tend to draw your inspiration?

TB: We really love playing songs from the new EP, especially Little Pieces. The energy we get from playing the songs is always amazing.

You will be playing with The Preatures in Torontoon June 7 and Riot Fest Toronto in September; are their any other dates where fans will be able to see you this summer?

TB: We’re playing Scenefest in St. Catharines on June 29! Also we are playing Osheaga in Montreal on August 1st.

When can fans expect a full tour?

TB: Hopefully soon! We are working on it.

What’s next for The Beaches?

We always like to include a portion of “fun” questions in our interviews, so here goes:

If you had to choose two other Canadian bands to go on tour with, who would you choose?

TB: Metric and The Darcy’s.

What was the first concert you remember seeing?

TB: hmmm I think it was the American Idol tour. I remember being bored out of my mind.

What is your go to karaoke song?

TB: You Get What You Give – The New Radicals

TB: Swimming and tanning. We are at the beach almost everyday in the summer.

Who are your favourite Canadian bands/artists?

TB: Make sure to check out our new EP Heights, available on ITunes!