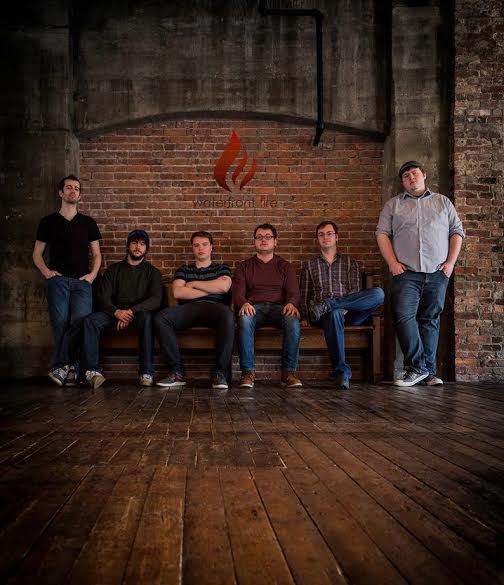 Waterfront Fire are a six piece alternative rock band from St. John’s, NL. Recently releasing their debut EP in March, the band are making a name for themselves in the local St. John’s scene and are branching out to the rest of Newfoundland after just completing a mini tour to the west coast of the island. We caught up with them to ask them about both their EP, tour and more.

For someone who hasn’t heard of Waterfront Fire before, what would you say to them to get them to give your music a chance?

JORDAN Free hugs for every listen! In all seriousness, we’re honoured with every listen and would like people to know that we pour our hearts and souls into this music, whether you hear it live or from the album we always give our all, and we hope that shines through.

Your first EP was released not too long ago with great reception in the local scene. Can you tell us a bit about the recording/writing process?

JORDAN: Writing in Waterfront Fire is very dynamic. There are 6 members who all play guitar outside of their respective instruments, all with varying degrees of styles. As a result a lot of our songs come flying from all directions and we pick and choose what we all enjoy and collaborate from there. As for recording, we’re still new to the game but we had an excellent time recording our first EP and it was great to work with Georgie Newman. The whole process seemed to fly by. The majority of the album was recorded in a about five hours live off the floor, which is the effect that we aimed for, there are no extra tracks that can’t be accounted for when we’re playing live. We want to give everyone listening the same feeling on the cd as when you see us perform live.

Any future plans for recording?

TOBE: We are in talks now with a couple studios and we’re hoping to start recording a full length album either at the end of the year or early next. We’ve been writing non-stop since our EP and we’re really excited to show off some of our new stuff – It’s been going over really well at our shows.

You also made the top 20 of the CBC Searchlight contest with your song Lifeless Acts. Why did you choose that one song in particular?

TOBE When we recorded our EP with GN Audio, Georgie, our producer, said that his personal favorite was Lifeless Acts, so as a tribute to him and his hard work, we dedicated our first single to him. This song also had great reception at our live shows so it was an easy choice.

Over Easter, you did a mini tour to the west coast of Newfoundland. How was the reception in comparison to your usual St. John’s gigs?

TOBE: People over in on the West Coast really have an ear for music. There is a big musical identity over there, I mean, they have the audio/visual program and it’s really pumping out the next wave of audio engineers. I mean, we played a show in Stephenville, at Clancy’s Pub, and after the first song, someone in the audience yelled out “I can’t hear the singer, turn up the mic’s” which proved they were actually listening to us, so we gave that person a free EP. And to be honest, it really set the stage for the rest of the night. And personally, it was my favorite Make Mean Everything show.

Any plans for another tour?

TOBE Absolutely, we would love to play Atlantic Canada next! Most likely though, our next shows outside of St. John’s will be some shows in Central Newfoundland.

Now, I know you guys are huge supporters of the local music scene so I know this one will be a hard one. Who are some of your favorite bands/artists locally? And Canada in general.

JORDAN: We have such a diverse taste in listening; this is one of the hardest questions to answer. A lot of the bands we’ve played shows with have grown to become not only our favorite local acts, but favorite acts period. Make Mean Everything, Young Manics, London Above, Elk and The Elderly, The Combine and The Beautiful Wrecks just to name a few. A lot of local solo artists have influenced our members as well. People like Adam Baxter, Jerry Stamp, and Stephen Green for example. As for Canadian artists, Wintersleep, Half Moon Run, City and Colour, Sarah Slean, Royal Wood. The list goes on for days.

TOBE: There are some great bands and solo artists in this city right now and the scene is only getting better. It’s really hard to rhyme off a couple without unintentionally leaving others out. Not only do we have favorite bands, we also have favorite bar owners. Bar owners like Gene at The Levee, Glenn at Distortion, Tony at Rock House and Ship, Ian at CBTGs have a big hand in helping grow our scene and we really hope this trend will continue for all future acts.

JORDAN:  Thank you for all that you do! You guys are everything we are and your support means everything to us!

TOBE: Thank you so, so much for allowing us to do what we love and allowing us to continue on this amazing experience! I know we can be annoying sometimes with our “Vote for us, for this” contests so thanks for putting up with us. I know this sounds cliché, but without you, we wouldn’t be where we are today and doing interviews like this! Cheers!