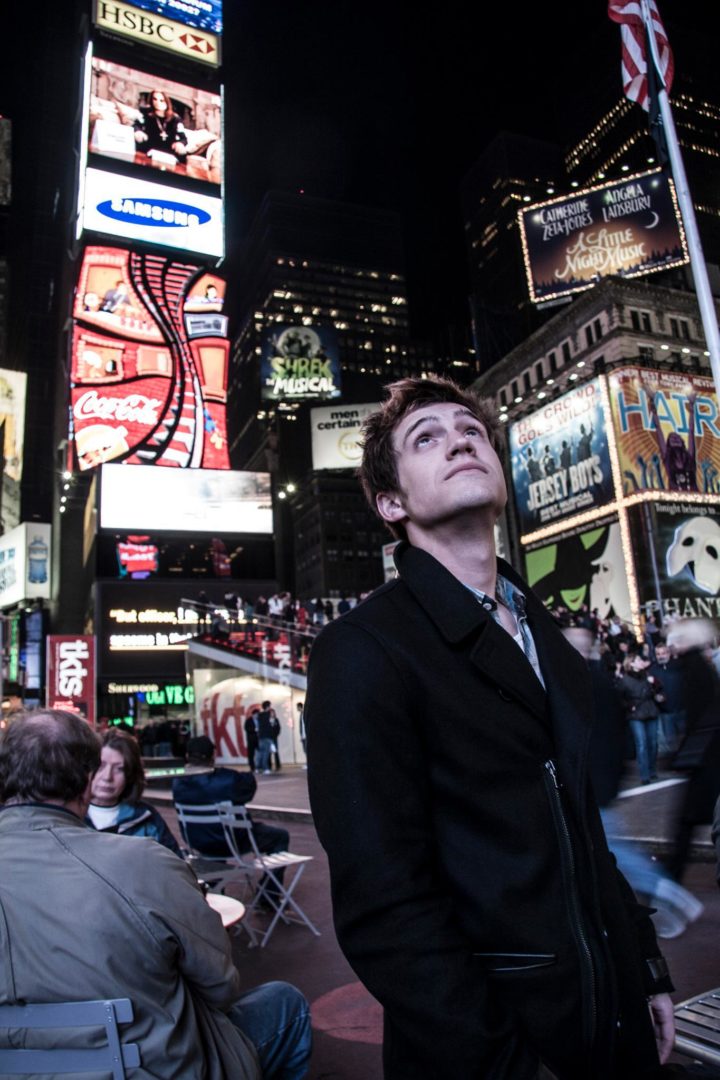 Joel Freck is a producer and DJ from Dartmouth,NS. After being forced to go to an EDM concert, Joel got into EDM becoming a known name in the Halifax music scene. Besides music, Joel is also an actor. He has been in shows and movies such as Mr. D, Call Me Fitz and Stephen King’s Bag of Bones. I had the chance to ask Joel some questions, keep reading to see how responses.

JF: One of the bands I really enjoyed was Two hours traffic. I saw them perform live once and was blown away. Artists/Producers/Dj’s would definitely be MSTRKRFT, Deadmau5, Chromeo.

JF: Yikes tough one ;). I’d definitely like to headline one day, but until I earn my wings I’d probably say.. myself opening followed by Atrak/MSTRKRFT. One of those two headlining for sure. In truth their are a lot of great artists in Halifax that I wouldn’t mind doing this with now.

JF: It would have to be after I saw my first show in Toronto at the “Guv”. The lineup to get into the concert was all the way around the block. I couldn’t believe that many people showed up just to hear “beats”. That night actually changed my life.

After the show, I knew this is what I had to do. Without thinking when I arrived back home, I purchased a Mac, a mixer and began to really learn how to produce and then DJ.

I guess it was the way the crowd was so connected to the performance and the music. The music took everyone on a journey and they didn’t miss a beat. I was blown away by the atmosphere and how people were so into the entire event. Those moments made me want to do this and create music people can connect to.

JF: I started at age 16 I believe. I was in grade 10 and my friend Travis was starting out in hiphop and asked me to be on board. We started a comedy hiphop group at the time called “Lunch-Time” (since we’d work during our hour lunch break and in between classes). I would produce and edit our songs. We eventually continued on using LT as a way to vent and write about what was on our mind. This pushed me to explore different styles of beat making from slow tempo stuff to more energetic tunes to set each mood.

You first got into EDM music after a friend forced you to go to an EDM show, what artists played the show and were they the first EDM artists you’ve heard?

JF: Yeah haha there is a hilarious story behind that. My friend Kevin called me as I was starting my shift bartending and said he had a plane ticket for me to Toronto leaving in 2 hours. “Joel your coming to see Armin. I promise you, it will change your life”. Needless to say he was right. The event was called “Freedom” at the Guvenment. I saw Armin van Buuren, some Carl Cox, John O’callaghan and Jay Force.

To answer the second part of the question, they weren’t the first I had heard. I had just started getting into Wolfgang Gartner and Deadmau5 before the event.

Levels was also blowing up at the time hahaha.

You’ve been in the Halifax/Dartmouth EDM scene for a few years now, would you say that the local EDM scene has changed and grown since then?

JF: It totally has. for ex: Before, DJ’s I knew were still playing in these little corner booths of clubs off to the side. I personally began setting up Main stages where ever I played at trying to replicate the feel of larger events and now everyone is doing it (not to say I started it) but I’ve noticed it has caught on.

Also the taste in music has grown. Before if you weren’t playing levels or top 10 radio garbage like most “Djs” were, you might as well consider the floor cleared..but now someone like myself can open with tech-house and have the floor bumping or play a huge melodic trance breakdown and have the crowd with their arms up enjoying the moment. It’s great.

JF: I’m not sure honestly. I guess it just appealed to me. I wanted to make the music I enjoyed listening to. I’m a pretty energetic guy and I loveeee melodic tunes so things like Trance and Big room house really appealed to me. I loved how I could embrace all aspects of the things I enjoyed creating into one package. Also this style of music is one in which everyone shares and I like the idea behind it. You make long intro’s and outro’s so that other DJ’s can mix in their songs with your songs etc. and people with good ears can turn these into something wild.

Any upcoming releases or shows?

JF: Definitely! I’m just doing the finishing touches on my new track “Amplify” and I also have another track close behind. As for shows, My friend Evan Wilder behind Wilder Events will be throwing quite a few this summer in which I will be playing In Halifax. I’m also starting to try in branch out into the Toronto/Montreal market.

JF: Back when I was young my friends and I (and the entire neighbourhood) would get together and plan “ManHunt” during the weekend nights. It was pretty crazy having 20+ kids organizing this huge game. We’d play for hours. Think freeze tag with a safe zone & flashlights.

JF: It would definitely either be Above & Beyond’s Acoustic Album or Andrew Bayer’s “It’s Artifical”/ “If it were you, we’d never leave”. That guys music and production game is out of this world.

Besides music, you’ve done some acting. What were your favorite roles you’ve played?

JF: I’d say my role on Mr. D. It was so hard to keep a straight face when on that set. I remember trying to hold back tears when Gerry D and Jonathan Torrens would improv lines.

I also thought my role in Bag of Bones was pretty badass. When we were doing a chase scene with Pierce Brosnan I was like “Holy s***, I’m being chased by James Bond!”

JF: This might sound strange but the Drop to “Wings” by “Tom Swoon ft Tyler Rene (Myon & Shane 54 Summer of love mix)”. As soon as I heard that drop, my head exploded. It’s so explosive and energetic with an uplifting vibe. If you want to know how I feel 90% of the time, that’s the song.

JF: I’m self taught at piano and can replicate most songs by ear. I also have a nac for pwnin’ cats in SC2 (Starcraft).

JF:  Honestly I would like to thank everyone of you for your support. Each compliment, like & listen, or handshake after a show pushes me to step my game up on each track. It makes the hard work behind it all truly worth it. It really means the world, so again, thank you! & I hope to see you at a show soon!

Keep in touch with me via Twitter: @JoelFreck or Facebook/JoelFreckelton