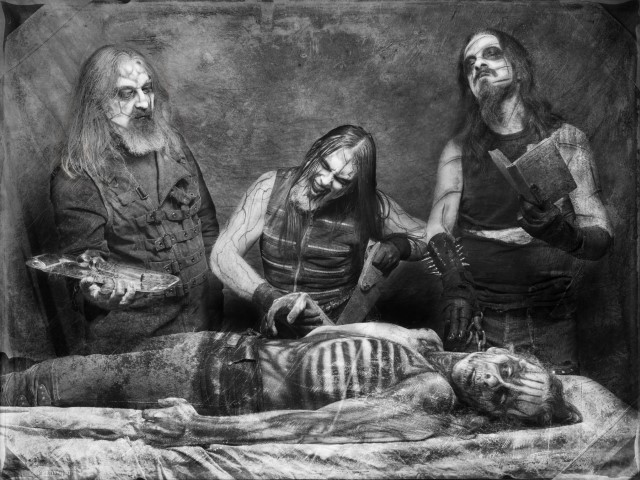 Hollow is a melodic metal band from Montreal, Quebec. After many members coming and going, the band now consists of BlaaC on drums, CaDaver on lead guitar, Mott as the vocals and Snow on bass. The band will be releasing their new album “Mordrake” on May 30th as a follow up from their EP “Cynoptic Schaton”, released back in 2010. I recently did an interview with the bassist, Snow aka Eddy Levitsky, read below to find out lots more.

You have had numerous people come and go in your band, what is that like? How does it affect the dynamic of the band and the sound of the band?

H: The reason we had so many changes in the band was because there was a clash of personalities, egos and ultimately it had to be weeded out. There was never a problem musically or artistically though so Hollow has stayed true to its original vision since the beginning, acting like a sponge, amalgamating all of the new influences through the years.  Unfortunately every member change halts the band and this is one major reason why it took over 4 years for “Mordrake” to be completed. When we parted ways with our previous bassist we looked for a replacement and failing to do so made me pick up the bass and learning that instrument ASAP. I also had to rewrite many parts to fill in the empty spaces created by the missing second guitar. Anyways, dynamically we are stronger and more united then ever but unfortunately this all took so much time and affected the band’s momentum.

What can you tell us about “Mordrake”? What can fans expect?

H: Our music has a little something for every fan of extreme metal out there but fans should expect a different sound from what they are probably used to. Even though we play symphonic metal as a whole, we approached the music in a very old school way without the use of triggers and as honest a playthrough as we could capture on tape. There are songs where we sound tired and we did not even try to hide it, we wanted that organic feeling, we are not machines!

What was the motivation behind the name of the album and of the songs on the album?

H: Edward Mordrake is a bit of an urban legend, it is said that he lived in 19th century England and had an extra face on the back of his head that did not have the ability to speak but could laugh or cry. Edward wanted this parasitical twin removed all his life because allegedly it whispered evil things to him at night. He ended up committing suicide at a very young age. This story fits right into the mythos that is Hollow, dark, tragic and downright creepy. Every Hollow song has a little drama and horror to it inspired mostly by literature. While Landscape is inspired by the “Color out Of Space” by H.P. Lovecraft, Anomie is inspired by Albert Camus` “The Stranger”. The last three songs (Birth, Hate and Death) tell our own fictionalized story about the life and death of Edward Mordrake.

You have released a few of the songs off “Mordrake” already. What has the response been like so far?

H: We took a lot of risks with our sound and so we expected some backlash from the elitist extreme metal community, especially by the black metal community because of our look. Up until now though we are very pleasantly surprised and humbled by the reviews and the fan reception who don’t really try to categorize us immediately but rather applaud our eclectic mixture of sounds! We could not have had a better compliment!

How can fans get these songs if they haven’t already?

H: The album will be on sale through CD Baby and distributed pretty much everywhere through the internet, itunes, bandcamp, facebook, etc. Our official website (www.hollowofficial.com)will also be launched on May 30th in concordance to the release.  We will make the album available on youtube as well and digital download will be a pay what you want kind of thing through our Bandacamp : hollowcanada.bandcamp.com.

What is next for Hollow?

H: Sky is the limit; we are concentrating on our release party show as well as booking a few tours this coming year. Also, we have already started working on our next release.

What are your inspirations for making music?

H: We are very curious people and learned too from different walks of life. We put all of our passions and interests into our music. It is hard to pinpoint one thing that inspires you and your music…Creating anything, music especially for me, is a very liberating thing and so I create music sometimes because I crave that feeling of accomplishment, it drives me and keeps me going.

H: Hollow comes from a mistranslated quote said by Nietzsche (I know now that it is mistranslated , but back when I was fifteen I felt pretty smart ;)). Something along the lines of “If you stare at the Abyss long enough, it will stare back at you”. In french abyss can also be translated into Hollow.

As a tradition with our interviews, we like to ask a few fun questions for the fans.

What are some of your favourite things to do when you’re not making music or touring?

H: Reading, playing games and unfortunately for my wallet, buying music gear. We are all pretty nerdy dudes. We don’t hate each other yet and so we hang out with each other quite often. But frankly speaking, music takes a big chunk of our life routine.

Do you have any band traditions?

H: Yes, giving BlaaC a hard time. Hahaha. We always have that little speech before going on stage that I learn verbatim from all the various famous Hollywood movie monologues. From the Gladiator to Rocky, it pumps us up and makes us laugh.

H: Thank you so much for everything. It might sound uninspired and cliché but whether you realize this or not, you are responsible for not only putting us on the road but for every single mile we drive. Again, thank you and we truly hope that you enjoy “Mordrake”, the fruits of our labor and a piece of our soul.