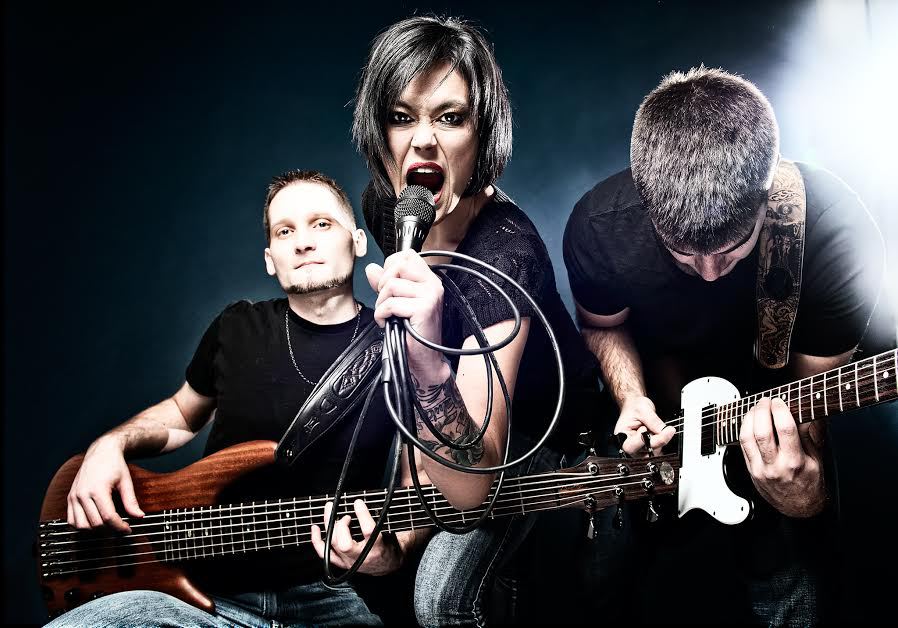 Melissa Kay, Andrew Smith and Scott Chamberlin make up the Ottawa hard rock band known as Overnight Collides.  We were lucky enough to get a change to do an interview with them recently.

What are some of your biggest influences in music?

Andrew – Luke Hoskin, Jim Root, Josh Farro, Ian D’Sa are some of the guitar players who influence me and motivate me to improve and continue to grow as a musician.

Are these the same influences that impact your writing style, whether its lyrics or sound?

OC: Melissa – Not necessarily. If I am writing a drum track for a song I have a tendency to mix indie punk beats with metal. However, if I am writing guitar, I tend to lean towards heavy melodic melodies and drifting vocal patterns.  Lyrically I build off experiences and how others influence me.

Scott – Yes and no, always gravitate toward what you like but also to what you listen to right now and I am always making sure that I do not listen to too much of the same type of music when working on my own music.

Andrew – I’m guitar sound is influenced by the artists that I listen to. When I create a guitar riff I stray away from sounding like any one of my influences.  Instead I combine them to create something different.

What can you tell us about your new album?

OC: Melissa – It’s eclectic.  There isn’t a set defined genre or sound.  Each song itself has its own charm and style.  For our first album we wanted to have each track be distinctly different from one another.

Scott – We tried to showcase the overall range of the band, mixing soft, hard and various other sounds into the mix.  This is not to deviate from our own feel of music to cater to others but to bring in people that might not normally listen to a certain type of track by having them enjoy another one.

Andrew – It’s very upbeat, fun, inspiring, and creative. More importantly, we hope that they are songs that can’t be compared.

OC: Melissa and Andrew met through a musician’s ad.  Andrew was in a band in the ‘start-up’ phase and they were looking for a drummer.  Melissa auditioned, and was immediately asked to join.  As the band progressed along, a new bassist was needed.  Melissa jokingly asked her long time boyfriend Scott if he would be interested in learning how to play the bass guitar. Scott agreed he would give it a shot, and the rest is history.

When did you decide you wanted to make a band together?

OC: It came together slowly.  We had a lot of departing members over the past year and a half.  Being a group of friends and being able to create music together is a rewarding experience to have.

Are writing sessions usually a big collaboration or is one person usually in charge of it?

OC: Combination – Guitar often brings the influence then, lyrics and drums alter concept to bring it all together and the bass fills in the remainder.

OC: Collision of sound, styles and concepts of music.  The concept behind the music of Overnight Collides is to fuse our sounds to make something unique.  Since we all have different musical influences, we strive to bring them together to produce a final product different than any mainstream sound.

How would you describe your music?

OC: A little bit of anything and everything. If we were to describe ourselves we are a mix of hard rock with flairs of punk, funk, metal and modern rock.

What is next for Overnight Collides?

OC: A rest from recording. Presently, we are working on new songs, jamming and playing shows.  We hope to record another album next year – even bigger and better.

As usual, we like to throw in some fun questions with bands for the fans to get to know them better.

What do you like to do between shows on tour?

OC: Melissa – I have a day job which takes a lot of my time outside music.  But, besides that you can usually find me shows supporting other local acts in Ottawa or just relaxing with my hubby Scott.

Scott – Don’t know yet… something to look forward to, likely going to be my main job of working with mechanical designs, robotics and computers.

Andrew – I spend a lot of time with my family since I’m a married man and a father. When I can I hangout with friends and go see movies.

Scott – Finger Eleven – pre-“Them vs. You vs. Me” and Neverending White Lights

Andrew – My favourite Canadian band of all time would be Protest the Hero.

Describe each of your band mates in one word.

OC: Melissa – Never settle and always strive towards your dreams.

Scott – If you want to see another record… please buy this one… we need the funding. J