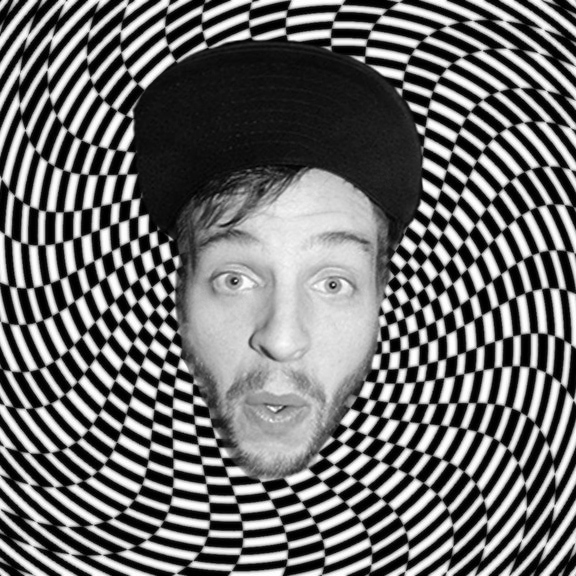 George Thoms is a Toronto based DJ/ Producer. He has recently released his new single, “Get Weird” and has just completed a tour of Paris, France. I had the chance to ask him a few questions during our email interview.

GT: I would say It was my pre-teens 11,12ish , I stopped playing hockey and got a drum kit. Thought it was awesome. Until the last 4 or 5 years I had to maintain some sort of normal job. Now playing music is thankfully all I do.

Who have been your main influences when it comes to your music?

GT:   Everyone, Ever!
The list goes on and on but recently I am working on a remix for Mel Brulee’s – Coeur Sauvage, I have taken a lot of steel guitar and reversed the audio sample, which is something I remember listening to on West coast hardcore band, AFI’s record Sing The Sorrow. There are definitely notes of Montreal-based producer Kaytranada’s flavours as well. Anything that sounds cool, I’ll take something away from it.

You spent the early part of your career as the lead vocalist in “Gone Hollywood”, then worked with “The Cancer Bats” and “Protest The Hero”, what made you move into the EDM scene?

GT: “Singing” in Gone Hollywood taught me a lot of networking skills. We were all broke kids screen-printing t shirts in our kitchens trying to make a couple bucks to pay for our jam space. So we made ends meet however we could. After Gone Hollywood broke up I never really wanted to be in a band with as many people again. Its tough trying to coordinate that many schedules. When The Cancer Bats asked me to go on the road with them as a technician It opened my eyes to a part of the music industry and the business elements that I had never seen. Its a lot of work man, but its passionate work, its your work and its fun work!
Being on the road with the brothers in Protest The Hero and Cancer Bats becomes such a fraternal family type thing you learn a lot about respecting other people on the road.
I have always been into EDM and hip hop and I have been a drummer since I was a kid so applying drum rudiments to scratching seems natural-ish to me. DJing made sense. I love touring so trying to tour as a DJ made sense. Here I am! lol

What sets you apart from other DJ’s in this industry?

GT: I am a punk rock  kid from the country. I came up listening to punk rock.. and country music. I didn’t come up listening to 93 Til Infinity or Illmatic, so I’m playing catch up to these MONSTER DJs who have been around the block and back. But I’m a  quick runner and I’m nipping at heels with the utmost respect.

What would you say has been your biggest achievement in your music career?

GT: It hasn’t happened yet. Opening up for monster bands like Everytime I Die or All That Remains to sold out crowds was pretty intense. I can’t wait to start DJ-ing for more than a few hundred people at a time! But I’m still waiting to hear my song on the radio. That’s the one for me.

Do you prefer working on original tracks or remixing existing tracks?

GT: An original track means a ton more to me than a remix. I have one track titled Jaded that still hasn’t been released. It’s a chill piano instrumental “trap” track that I wrote while on tour after coming to terms with some major life changes that I was positively and negatively responsible for. I want to add vox to it but it’s going to have to be a perfect match.
A remix, I get jacked on and it’s fun to watch crowds respond, but they are a little more removed than an OG track.

If you had to recommend one track that you’ve done to someone that would make their opinion on your sound, which would you choose? Why?

GT: I haven’t officially figured out my own sound yet. I just write what feels right at the time. I mean I love the second half of my single Get Weird because it makes me just want to dance and ..well…”get weird.” Lol . But in the same breath I love Jaded and more so my new remix of Coeur Sauvage. It’s a beautiful song before the remix, which makes me super hesitant to mess with it. Melanie may have wrote a perfect track with that one. I hope I can do her justice! Come see one of my DJ sets, you’ll get it!

You have upcoming dates in Paris, what is it like performing there?

GT: I have never played in Europe. I’m super nervous. As I’m sitting here in the airport drinking an old fashioned doing this interview, I am thinking it’s going to be great! Dj-ing in bars and restaurants forces you TO BE RESPONSIVE to a room, so I like to think I’m pretty good at that, which will help me with these shows. I’m just going to go for it and see how people react and if it’s not the way I want, I’ll switch gears and try something else.. hopefully without them even knowing I’m doing that!

Given the chance, which artist would you love to work with in the future?

GT: Id love to do a track with Thugli or take a look into A Tribe Called Red’s writing. Hudson Mohawk would be another obvious artist. But lets be real I love the hell out of most people. I’m stoked about being creative with just about anyone!

Do you have any advice for people looking to get into the EDM scene?

GT: Do it because you are passionate about it. Not because it’s cool or trendy. That’s a one-way ticket to working at a McDonalds in 5 years from now. If you love DJ-ing, or producing and writing then do that. Play a couple tracks that mean something to you that most people wont get… the few people that do will be FANS forever.  And be a sweet person. That goes waaaaay further than what brand T-Shirt you are wearing! Be Sweet Or Die!

GT: Well, after this Euro trip is done I’m booked up for a month straight in and around Toronto. Then I am in the works of lining up a week of gigs in Miami, which should be a ton of fun! I am also going to release this Mel Brulee track and work on some other fun things!!! GET AT ME PRODUCERS lets work together!

We always like to include a “fun” portion in our interviews, so your fans can get to know you a bit more, so here goes:

Canadian Beats is all about Canadian music, who is your current favourite Canadian band/ artist/ dj?

GT: My Laptop, Cigarettes, A French Press. If I die because of those choices, Ill die a happy man and there will be a sound track to my death written on my computer!

Think back to your past, what was the first concert you ever attended?

GT: The Highland Games in Maxville, Ontario. It’s a gathering of Scottish pipe bands from across the world. A more traditional answer would be Fleetwood Mac!

GT: THANK YOU! From the bottom of my heart! The homies that roll through and drink and party and high five me y’all are the greatest! I have no fans just friends!