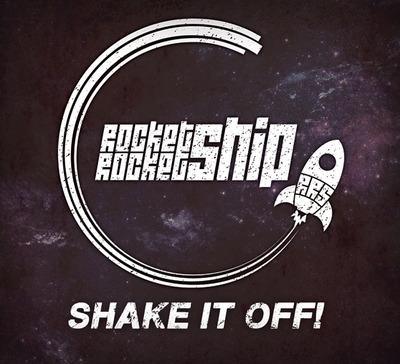 RocketRocketShip is an independent band from St.Johns, NL. The band consists of six amazing guys, Tyrone MacNeil – Lead Vocals, Paul Brake – Guitar/Vocals, Dave Shears – Bass/Vocals, Jeremy Kelly – Drums, Kenney Purchase – Synth, and Matt Dines – Guitar/Vocals. RocketRocketShip has opened for bands such as Marianas Trench, Faber Drive, These Kids Wear Crowns and Down With Webster. RocketRocketShip released their first full album back in 2012 called ‘ Your Best Kept Secret’ and now it is very exciting to announce that they are releasing a second full album called ‘Shake It Off’ The album is available tomorrow (May 13) for purchase on iTunes or their merch store for a physical copy.

RocketRocketShip’s album ‘Shake It Off’ is a mix of different sounds. There are slow songs like ‘Warm again’ and ‘Heres To Us’ Then there are fast, upbeat songs like ‘Tell Me What You’re Waiting For’ and ‘Hey Black Widow’. The album will fit any mood that you are in. After listening to the singles that came out I knew I would be interested in the rest of the album. After listening to the full album a few times. some songs really caught my attention and I can’t stop listening to them! The one song that really stuck was the song called ‘Starstruck’, it is very upbeat and catchy. The beginning vocals keep you hanging on until the chorus and from there it gets you hooked with catchy lyrics and beats.

‘Shake It off’ is an album that I would recommend to all my friends and other music lovers. I liked all the songs on the album and that doesn’t happen very often, there is usually that one song I skip every time.

Congratulations to RocketRocketShip on the release of your second full album.