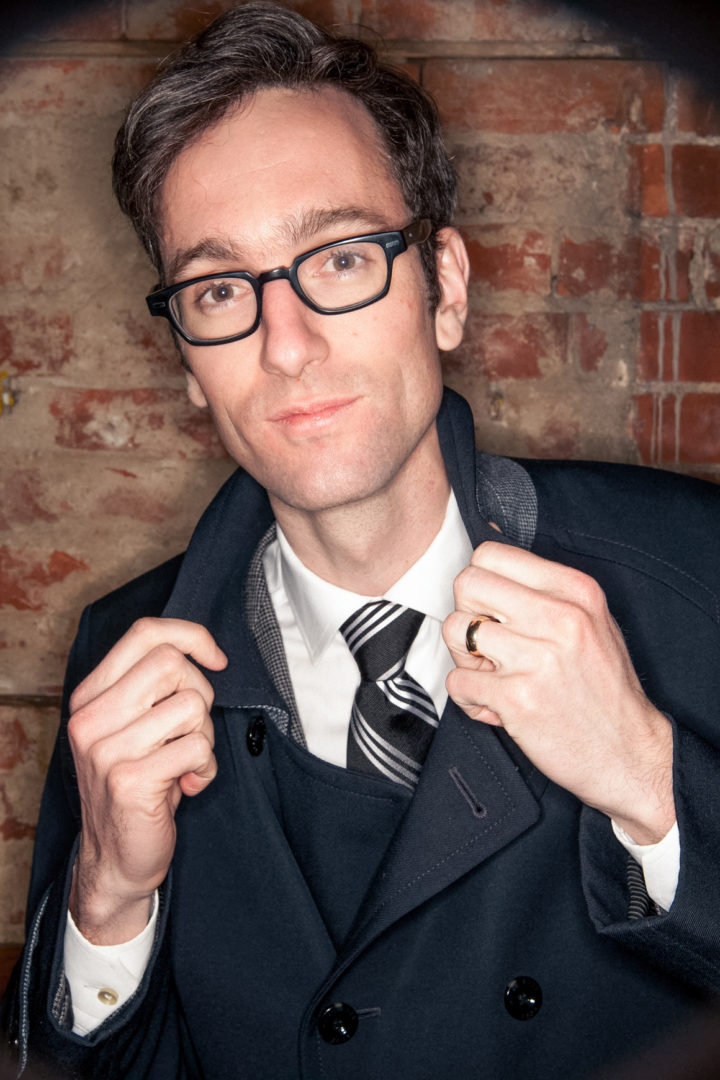 David Myles is a singer and songwriter originally from Fredericton, New Brunswick.  Living now in Halifax, Nova Scotia, he has been rising up in the music scene. His most recent album, “In the Nighttime” was released in 2013. You may know him by his song “Change My Mind” or in Classified’s song, “Inner Ninja”.

“In the Nighttime” is a “double album” featuring a full length on disc one and a 6 song EP on disc two. Disc two is called The After Party. And on top of all that, David will be releasing a Christmas album this fall called It’s Christmas, so be sure to keep an eye out for that. I had a chance to ask David a few questions during an email interview, and now it’s time to share with the world!

How would you describe each of the sounds on either disc? Are there any similarities between the two parts?

DM: The biggest difference between the two discs is the production.  One of the things I thought was coolest about presenting the discs like this was to see how songs written and sung by me can come off so differently just by a different approach in the studio. Disc 1 is way more rootsy.  Basically a group of musicians (my dream team of dudes from all over the place) playing together at the same time.  Old school.  Disc 2 was produced by Classified. I love working with Classified cause he works in a totally different way than I was used to. And I really love it. It’s super creative. Overall it is less based on live instrumentation and tends to be more arranged with bigger beats.  The beat plays a bigger role in the tunes for sure when Class produces them. I love that.  But again, the nice thing about putting the discs together is that you can still hear the similarities because they are both songs written by me, with me singing and playing guitar.  So that thread runs through both of them.  Makes it really fun for me to go between the two worlds.

Why did you decide to combine the two into a double album instead of releasing them separately?

DM: I think I kind of answered that in the last question.  But mostly it was cause I felt like they were both reflective of me.  Particularly over the last year and a half. These were both things that I was working on at the same time.  And it just felt write to release them together and say, “here it is”  Both sides of what I do. It was liberating. I think otherwise we could have gotten all messed up with trying to market each record to different people etc,.  I didn’t want to hide one side or the other.  The fact is, I do both things (and still do) so why not put em together so people get a sense of that.  The nicest part has been to see all the people who have come to the record by one of the discs and end up totally digging the vibe of the other one as well.  It’s been really rewarding.

Do you find that there are more struggles to get into the industry because you’re from the Maritimes?

DM: I think no matter where you are, you have to ready to tour. I love living in the Maritimes. It’s my home and so far it’s been a great place from which to operate my career.  I travel a lot for sure but I’m sure I would no matter where I lived.  Plus, in the summer, I can get to the beach in a half hour or bike to a lake for a swim. Totally worth it. I love the musical community here as well. I’ve been so lucky to work with a bunch of wicked artists like Joel Plaskett and Classified. It’s been really fulfilling place to work as an artist. And tons of my friends like Rose Cousins, Old Man Luedecke, Jenn Grant, etc. work out of here as well. It kind of feels like we’re a team.

Since you originally went to school for political science, did you ever picture yourself where you are today? If you didn’t pursue music, what were you going to do with your degree?

Not sure what I was going to do but I’m sure glad it worked out like it did. Since I was a kid I always had the dream that I would get to play music full time. It’s always been my main passion. I just never thought it was a possibility. Honestly. I played trumpet and listened to records veraciously all through my school years.  However, it wasn’t until I bought a guitar and started writing songs that I could see a possible window. I was hooked and knew I had to at least give it a try. 12 years later and I’m still going, so I feel pretty darn lucky. I love it more now than I ever have.

How do you think you have changed as an artist, if at all, since your album Together and Alone?

DM: I’ve become more confident I think.  More comfortable with who I am as an artist.  It’s a fun process. More and more you trust your instinct and take more risks. And that’s where the good stuff really comes from.

How did you meet Classified?

DM: I met Classified at a Music Nova Scotia conference in Liverpool.  We started talking about 90s hip hop and ping pong and got along right away. We’ve been great friends ever since.

What was it like when you realized how successful Inner Ninja was getting?

DM: It was amazing. Just seeing something that started as an idea, come together in the studio, then take on a whole new life of it’s own once it got released was a dream come true. I’ve never had so much fun in the studio. Working with Class has always been super fun and really cool. I think from the first time we worked together we had a feeling we were on to something special. At least, we knew we were making stuff we both really dug and were having a blast doing it.  So seeing it all come together with that track was an amazing feeling.

Inner Ninja has also been named the biggest-selling rap single in Canadian history. What is it like to be a part of something that big?

DM: Unreal.  One of my first CDs ever was Symphony in Effect by Maestro Fresh Wes.  I knew every lyric on that record. And he was the first person to congratulate us on our Juno. The hip hop community is amazing in Canada. There are tons of great artists and it’s really supportive and dynamic. I love it. The whole experience of getting to know more of those artists and more of the community in general has been a highlight for me. I’m really grateful.

Are there any other Canadian bands/artists you would like to collaborate with?

DM: I just wrote a song with George Canyon. That was pretty darn fun.  I’m always up for collaboration.  It’s pretty new to me but I really find I’m most in my element in that kind of situation.  I also recently wrote a song with Dylan Guthro called ‘Do It All Again” and Matt Andersen called “So Easy”, which I think both turned out really great. I hope to do that a lot more.  The collaboration I have with Class though is special and I think I’ll always make music with him no matter what other collaborations I have going on.

What is your usual writing process like? Where do you draw inspiration from?

DM: I write as much as I possibly can.  Any quiet moment I get.  I don’t find I write much on the road so any day that I’m off and at home I set aside a large chunk of time to work. I used to think it would just hit me and I could be anywhere. Sometimes that does happen but really I find I need to respect the muse and give it a real chance to reveal itself (Sorry if that sounds cheesy). But it’s true. I have to get myself in the zone where ideas will start flowing. The more free I am to try stuff out, by just singing and playing loud without worrying about a thing the better the situation is for getting something good.

DM: I have a Christmas record coming out this year.  I’m super pumped about it. We made it just before Christmas last year while we were all in the spirit.  I really didn’t want to be making it in July and going through the motions. I didn’t want this to be a novelty. I ended up getting totally into it.  And I think it came out really great.  I wrote a few songs, which strangely ended up being some of my strongest to date.  Plus I got to record it with the guys I tour with and play with night after night so that was a real pleasure as well.

The next few questions are going to be fun ones for the fans. It’s a typical thing that we do at Canadian Beats.

When you’re not touring or making music, what is the one thing we can always catch you doing?

What is one of your guilty pleasures?

DM: I’ve been super into full on pop music lately. I’m not even going to say it’s guilty.  I used to feel guilty about it but now I’m over it.

If you could do a dream tour, with anyone alive or dead, who would you choose?

DM: Not sure it would be a great fit for me musically but I’d have to say Bob Marley. I would love to see him rock it night after night. Apparently his live shows were like no other.  And he’s certainly one of my biggest musical heroes.

Do you ever get your own songs caught in your head?

DM: When I’m in the process of writing them they never leave my head.  It’s crazy. I just walk around like a zombie singing them, working through them.  I like to think people don’t notice but I totally think they do.

What are some of your own little quirks?

DM: I’m pretty distracted. As I said in the answer below, I can really lose myself in music or a song. Sometimes mid sentence or whatever. It’s brutal.

Is there anything you would like to add for your fans?

DM: I love you.  I really do. I can’t tell you how lucky I feel to get to do this.  I look forward to many more years to come!