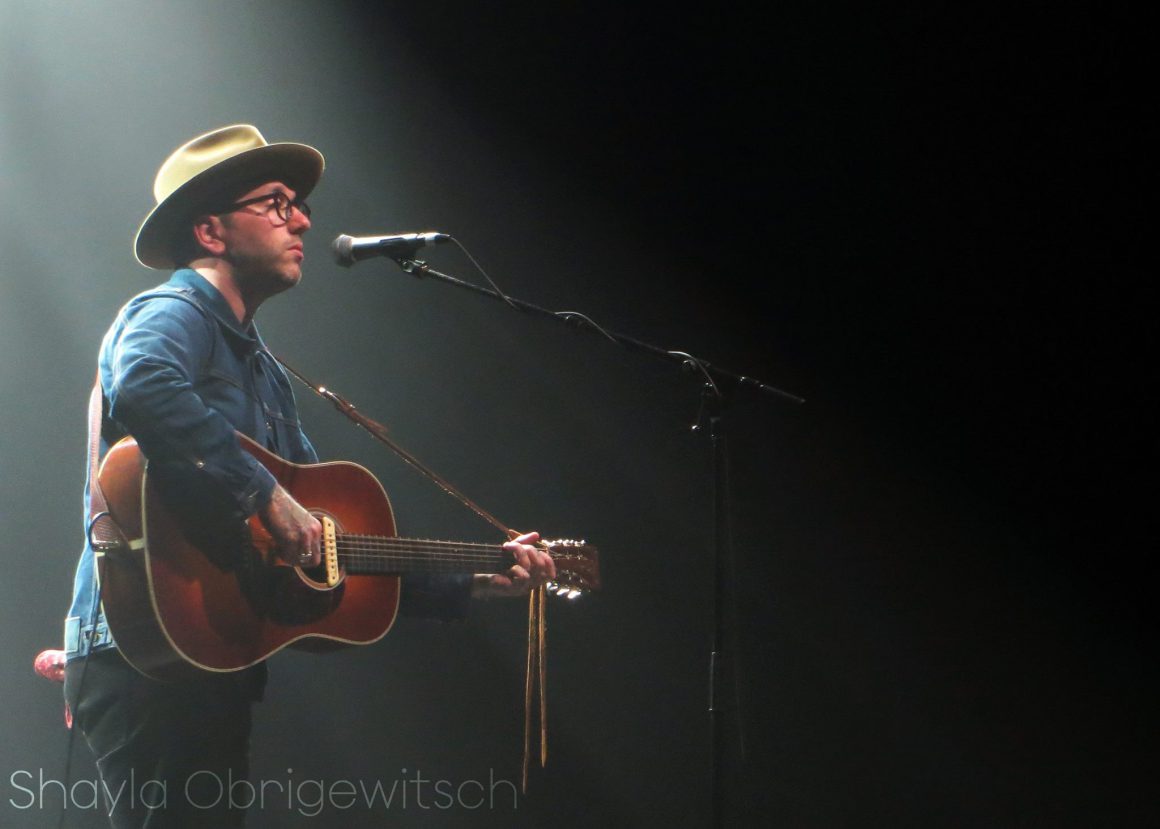 Thousands of fans gathered at the Halifax Metro Center in Nova Scotia on Saturday night (May 3rd, 2014) to attend the sold out City and Colour concert. With this being the first show of the cross Canada tour, fans were eager to see what was in store.

Half Moon Run – a band based in Montreal – opened up the night and got the crowd pumped. They were extremely energetic and sounded fantastic. As someone who had not heard their songs prior to this, a couple songs that stuck out for me were “Call Me in the Afternoon” and their closing song “She Wants to Know”. It was Half Moon Run’s first time performing in Halifax, and I’m sure a lot of people in the crowd are already looking forward to their return.

About half an hour after Half Moon Run left the stage, the lights went down and the crowd began to cheer. The 1986 Three Amigos movie theme song played through the venue for a couple minutes. Ontario musician Dallas Green then hit the stage with his backing tour band consisting of Jack Lawrence, Doug MacGregor, Matt Kelly, and Dante Schwebel. True to his Canadian roots, a Canada flag was displayed on stage.

Green and the band began the show by performing “Harder Than Stone” from City and Colour’s latest 2013 album – The Hurry and the Harm. Although this is the first Canadian tour since releasing the new album, there is not a significant amount of songs from the album on the setlist. There’s a pretty even amount of songs from his 4 studio albums, and others.

Before the song “Body in a Box” from the 2008 album Bring Me Your Love, Green asked everyone to take out their phones and cameras and hold them in the air. The arena was lit up. He then requested we all put them away in our pockets for 3 or 4 minutes as they performed the song, saying to live in the moment in order to make true memories, rather than spend that time trying to remember it with records and not really remembering it for ourselves. “Comin’ Home” from the 2005 album Sometimes was quite a crowd pleaser. This was of course due to the line, “I’ve been through Nova Scotia, Sydney to Halifax” which caused the crowd to erupt in cheers.

Dallas Green introduced many of the songs as “this is a song about a complicated situation”, or as a straightforward “this is a song about dying”. In between one song as he was taking a drink of water off of the table set up beside him, an audience member yelled out “bottoms up, Dallas!”. Dallas then took a drink from the can of beer also on the table and replied with, “peer pressure”. Another crowd member yelled out “you’re so dreamy!” from the back of the floor. He replied with, “That’s debatable…a bad dreamy maybe…like a nightmare you wake up from”.

A highlight of the concert for many fans was the performance of “The Grace”. This is a song released in 2005 written by Neverending White Lights, featuring Dallas Green’s vocals. This is the first tour that he has ever played it live, and with Halifax being the first show of the tour, it was the live premiere of the song for him.

City and Colour is always sure to put on an excellent show. Dallas Green is an incredibly powerful vocalist who is also an amazing songwriter. When teamed up with a backing band and a striking light show, this Canadian tour is not one you want to miss. I was lucky enough to meet and chat with Dallas after the show, and as we were standing there with him a police car drove by and asked us if we knew what was going on at the Metro Center earlier. Dallas replied with, “Aerosmith!”. Don’t be that guy that doesn’t know when this amazing artist and backing band is in your city!