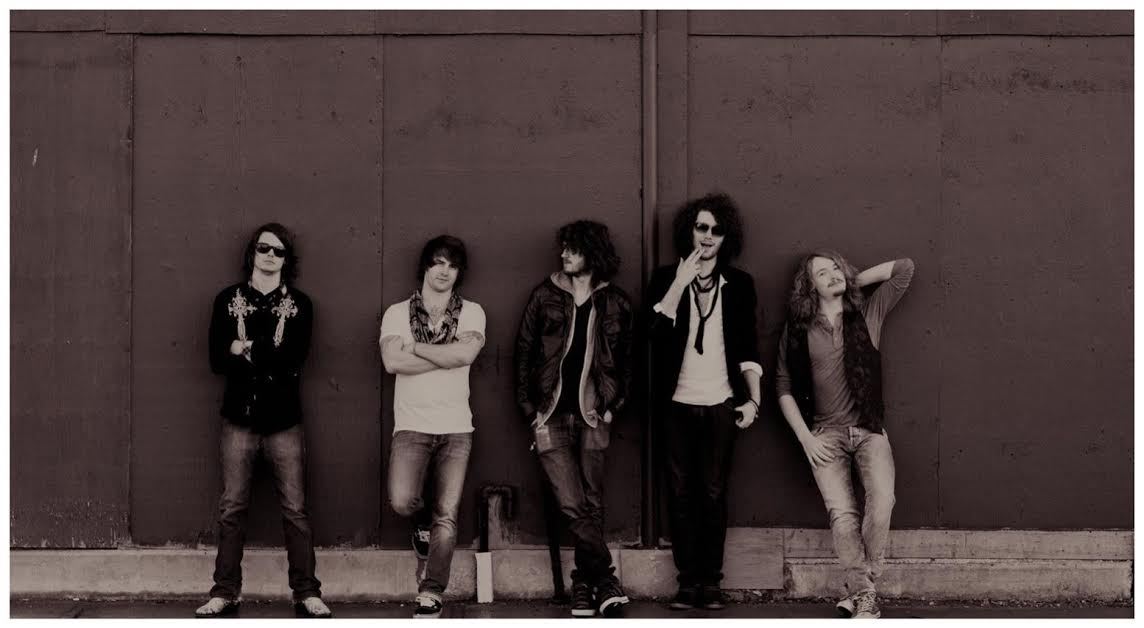 Open AIR is a five piece band from Calgary including Garrett Greenhall (guitar), Steve Lilley (guitar/backing vocals), Tyler Bourne (bass guitar/backing vocals), Steven Mansfield (vocals), and Josh Hearnden (drums/backing vocals). They combine a mix of newer rock influences such as The Sheepdogs and One Bad Son, with classic rock legends Led Zeppelin, The Who, KISS, and many more.

In celebration of their single “Snake Charmer” off of their latest EP ‘Extended Play’, Open AIR has an appearance at Canadian Music Week, which happens in May in Toronto. You can purchase the EP on iTunes.

Need to know more about this band? Well you’re in luck because we were able to have an email interview with them.

Garrett: When I was thirteen years old, I bought Iron Maiden’s Powerslave album, and I was very inspired by the harmonized guitars and aggressive vocals.

What kind of things inspire you to write new songs?

Steven: Most of what I write comes from current events and emotions in my life. Sometimes I will write about fictional characters to express experiences I have not had. However, the emotions I feel are still expressed in these fantasies.

What is it like starting out as a newer Canadian artist?

Steve: It’s a constant learning process of what to do and what not to do. The western canadian music market is very hard to break out of. However, in this challenging environment, musicians are forced to be creative and think about what they’re doing on both the artistic and business side of things.The music industry is also constantly changing these days, and there are all kinds of new tools to use in social media. Open Air is always learning something new.

If you weren’t in music, what do you think you’d be doing?

Ty: I would be in Graphic Design and Concept Design. I have done the artwork for our albums, posters, and other media.

At CMW, there are a lot of different bands as artists from different genres and parts of the country. Who would you like to meet most during the week?

The Balconies. We saw them when they stopped by Calgary with The Rival Sons. They put on a wicked performance. We would love to meet them and play a show with them some day.

Josh: The Rival Sons. They are one of our biggest modern influences, and they have a huge fan base in the European market. Touring with them would be a whole new experience for us.

We have a very 1970s classic hard rock-inspired sound with a modern twist. People should listen to our fan favourite, Preacher Man, to get a good idea of what we mean.

Our yet-to-be-recorded epic, Traveler. You get both our light and heavy sides with this tune. It starts out as a slow ballad, and ends with a bang.

Once we return from music week, we are excited to begin pre-production for our next album.

What was the first cd you bought?

Josh: AC/DC – Back In Black

Steven – anything with hardening chocolate sauce

You’re stranded on a desert island. Name three things you’d want with you.

Tyler: not looking at people while talking to them

Steven: trying to make the band laugh on stage

Josh: drumming on anything and everything

Steve: snapping while walking (a lot)

Practicing our set and making our music as tight as it can be.

Any Canadian bands/artists you would recommend to your fans?

One Bad Son – we’ve had the honour of sharing the stage with these guys on a few occasions. They are nice and honest musicians, and their music deserves to be heard by all.

We’ll also mention some of our fellow Calgary bands. Just to name a few: Frankie McQueen, Throne Of Vengeance, Kingdom Of Few, and Zoo Lion

Australia, Europe, and Japan on tour.

Garrett: you wouldn’t know it from his figure, but he is a bottomless pit of cheeseburgers.

Josh has had his spine broken twice.

Is there anything you want to say for your fans?

Thank you for continuous love, support, and inspiration. Without you, we would be nothing.