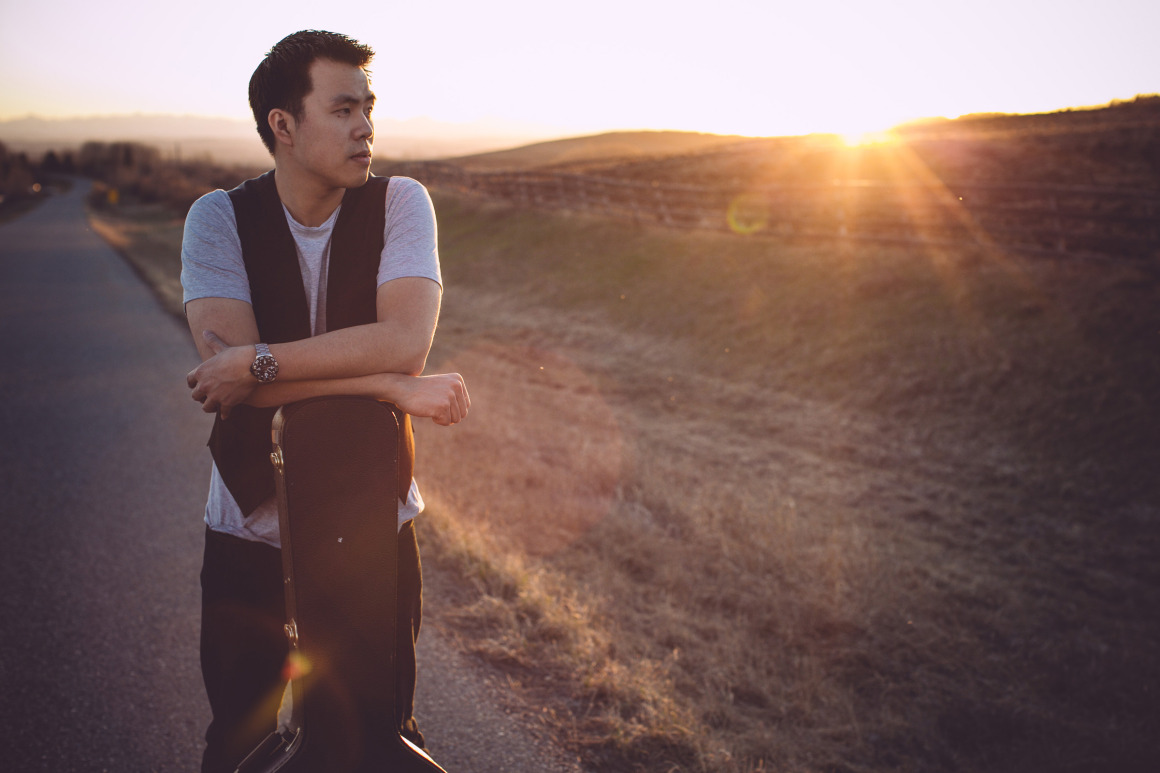 Jonathan Li is a singer/song writer from Calgary, Alberta. His music combines soulful groove-inspired pop/rock hooks with complex emotions of life beyond what you would find in most pop music. Jonathan is influenced by artists like the Goo Goo Dolls and John Mayer. Continue reading to find out more about Jonathan Li and his music.

Canadian Beats is all about Canadian music.  Who are some of your favourite Canadian bands/artists?

JL: I have so many but if I had to narrow it down my top 10 it would be Mariana’s Trench, Tegan and Sara, Matthew Good, Our Lady Peace, Hawksley Workman, Stars, Feist, Lights, Arkells and dead mau5.

JL:  Oh man, that is a really difficult question, I would say, Tegan and Sara as the headliner, Mariana’s Trench, Matthew Good and Lights as the openers. I know that’s a lot of openers but I can’t leave any of those artists off the list. I guess we’re getting closer to a Canadian music festival at that point huh?

JL: It’s the moment when you’ve written something that you know people will enjoy, it’s that smile that’s on your face knowing that you may have something special. Continuing with that, when you perform that song live and it actually means something to somebody, that’s unbelievably fulfilling. I’ve never felt more alive than when I’m writing and playing music, so the first time I wrote something that I thought had some value at 16, that was it. I was hooked.

JL: I actually started late in music, at around age 14, I had done a tiny bit of music before then (you know learning how to play the mandatory “recorder” in grade 4) but I picked up guitar at 14. So I would say 14 would have been my start.

How would you describe your album “Our Stories Matter” to someone who hasn’t heard it before?

JL: I would say that it’s a pop rock record that kicks at your heart and (hopefully) gets stuck in your head. An album that goes from pop to folk pop to rock, with a little bit of something for everybody. It talks about who you are as a person and who is going to go on the journey of life with you, something I think that’s pretty universal.

What song of yours would you tell someone whose never heard your music before to listen to and why?

JL: Oh man, I’m going to have to “cheat” a bit with this answer. I feel as though “Back to Me” or “In This City” reflect my music the best. Both have rock and pop elements that show case my pop sensibilities but they both have rock elements. I feel both are songs people can sing along to and remember, and that’s important to me. Lyrically, I feel as though they both touch on the human condition, both are about remembering who you are and becoming the person you’re meant to be.

How many songs were originally written for the album and was it hard to narrow it down to 11?

JL: I think I had originally something like 20 songs, not full songs mind you but fairly complete ones. It actually wasn’t too hard to narrow the songs down, I had an original 10 that I was going to record but when I started working with the amazing and talented people on this album it spurned me to write even more and so I wrote another 5 when we were recording. Those made the album and brought the album to 11 songs.

Out of all your songs, which is your favorite?

JL: I guess for me it comes down to what I love playing live, and I love playing “One Life” for people. I think the fans are always waiting for that song in the set list, it’s been our closer so far. The song is about trying to chase your dreams and to do something bigger than yourself. I feel like that’s what I’m trying to do right now, chase my dream in music, so it feels really appropriate for where I’m at in life. It feels like an anthem for myself but also for others, go after your dreams, don’t be afraid.


These next few questions will help your fans get to know you better, what is your favourite food?

JL: Oh man, I always have such a hard time with this question. I’m the one at the restaurant who can’t decide what he wants cause everything seems good (I love researching restaurants and finding new places to eat especially when travelling). That being said, being born and raised in Alberta, I don’t think you can beat an Alberta steak or some amazing ribs.

JL: Hmmmm, well I’ll admit that I’m a HUGE Batman nerd, so a memory that sticks with me is coming home from school and watching Batman (both Adam West’s Batman and the Animated Series) with my Grandma while drinking Ginger Ale (Canadian Dry of course).

JL: Oh man, this is an impossible question, I was the teenager who grew up working in record stores so this is a really tough question. I’m going to have to cheat again with this answer, if I had to go with something “classic” then it would have to be U2’s “Joshua Tree” or if we had to go with something newer Marianas Trench’s “Ever After” or NEEDTOBREATHE’S “The Reckoning”.

JL: Gotta go with blue, blue is a solid color, that’s the color of my electric guitar (and the next one I’m getting too).

What song on your new album describes you best?

JL: I’m going to have to go with “One Life” again, it describes exactly what I’m trying to do with my life, which is chasing this “music” dream that I have but not to do music just for myself but hopefully to do something that’s bigger than just myself.

JL: Apparently not, since I’ve been thinking how to answer this question for the last 10 minutes…haha.

JL: Thank you guys so much for supporting me, I’m just a person in love with writing and playing songs, I’m really trying to make music my life. I’m at the beginning of my journey of striving to do this as my career (although I’ve been working towards this for a long time) and would love to have you guys with me for this journey. Also, I’m a people person so I’m always up for a conversation so find me on social media and let’s talk! Once again, thank you for your support.