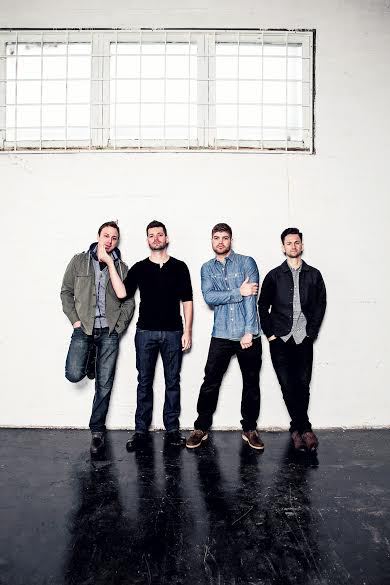 City Walls are a Vancouver based rock band. City Walls consists of brothers, Paul and Tony Lambert, Nate Parsons and Brian Welsch. City Walls are formerly known as ‘Louder Than Love’. The new City Walls album is being released in April 2014. Keep reading to find out more about City Walls!  You can find our review of the album here: http://canadianbeats.wordpress.com/2014/04/15/review-city-walls/

Keep reading to find out more about City Walls in this email interview that we conducted with Paul Lambert.

Canadian Beats is all about Canadian music.  Who are some of your favourite Canadian bands/artists?

CW: There is so much great talent in this country.  I think some of the bands we identify with a bit more just because of our style are Sam Roberts Band, Arkells, The Sheepdogs, Mother Mother, and some of the more classic guys like Neil Young.

CW: We’ve played with the Sheepdogs, The Trews, and Monster Truck, all were fantastic bands we’d love to have on our fantasy bill.  I think the other names we already mentioned like Sam Roberts and Mother Mother would have to be on there too.

CW: We all grew up playing sports, but in our early teens switched over and really focused on music instead.  There is just this raw energy that comes from composing something and ending up with a great finished product.  Then there is the performance side, which is such an adrenaline rush.  Music just gives back in so many ways.

CW: Nate and Tony started playing in a band together at age 12. Paul, who is Tony’s older brother, and a couple of his high school friends had a band.The two groups played gigs together throughout high school, often at bars, where we would have to leave right afterwards since we weren’t old enough to drink!

Your newest single ‘Trapped’ was released in February, how was the overall fan reaction to the new single?

CW: The single was actually just released last week! But in this short amount of time, the reaction has been great. We sent out the tracks to longtime fans in advance of the release, and their enthusiasm was really refreshing after having worked on these songs for such a long time.

With your newest album being released in April, what can we expect from it and how is it different from the others?

CW: I think we’ve been experimenting with our sound and musical instincts with each album. Our first album Dark Days was more of a progressive rock sound, but still had that acoustic-folk element that we drew on for certain songs.  Our second EP, Coming Around was more of a blues-rock, southern rock feel, but still drawing on those acoustic elements.  Engines, which will be released April 15, sort of takes the best parts of each of those albums, and brings things together into a well rounded whole.  We still like to rock out, and we still like to break it down with some more mellow stuff too.

Are there any plans of a tour upon the release of the album?

CW: We are heading on the road in April, and will be hitting a number of stops between Vancouver and Montreal.  The tour schedule is available at www.citywallsband.com/shows

CW: Nate: Tony and I skipping school on a Friday afternoon in Grade 8 to play music, tear up the town, and eventually get a week’s worth of detention as a result. Paul: At 15,  I used to play with the houseband at the Yale, the famous blues bar in Vancouver. My dad would have to bring my down and before and after I played I had to stay put in the soundbooth because I was definitely not supposed to be there!

CW: I think anyone in Vancouver will know what we mean when we say our least favourite colour is grey. It’s grey 6 months a year, so I think blue is everyone’s de facto favourite colour around here.

CW: Since we like to do both the acoustic and the full-out rock and roll thing, I think one song on our upcoming album called The Sign really embodies both of those elements.  It also has got some great vocal harmonies, fiery slide guitar solos and a stompin’ beat.  It sort of shows all the things we like to incorporate, all in one song.

CW: Tony can consume his own weight in food in a single day. We discovered this on our most recent tour.

CW: Thank you so much for all your fantastic support, we love you and we hope to see you on our upcoming tour! Can’t wait!