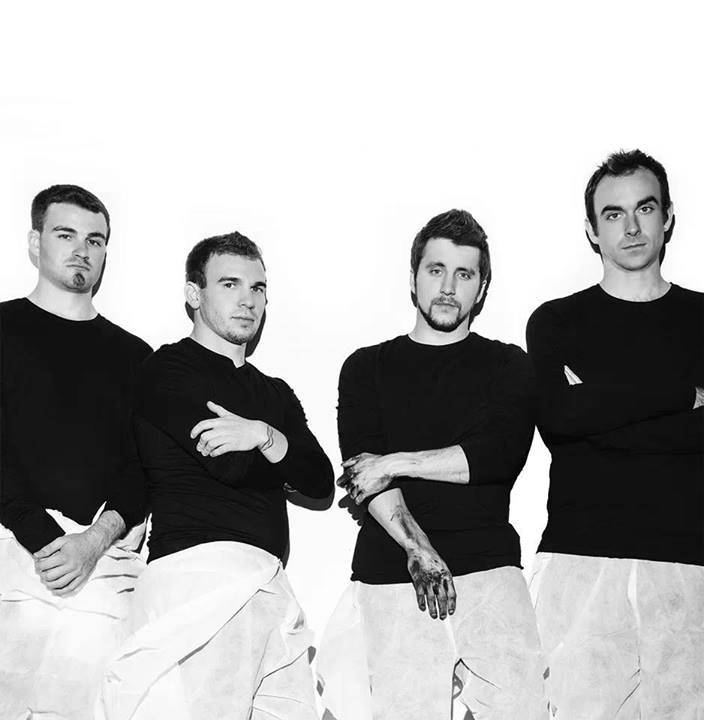 Dear Love is an alternative rock band from Toronto, Ontario, which is made up of three Nova Scotians, Dave Rideout, Marty Doyle and Mike Barnaby. The three of them have teamed up with Ontario drummer, Shane Kippel.

I caught up with vocalist, Dave Rideout, and was able to ask him a few questions about their background, their EP, and more.

How did you come up with the band name, Dear Love?

Dave Rideout (DR): We spent a long time brainstorming for a name that would be just right. We wanted something that felt personal, because a lot of the material is about the ups and (more particularly) the downs we all go through in relationships – be them with friends, significant others, family, whoever. We all have love for these various figures in our lives, however tumultuous, so we thought that personifying ‘love’ and addressing it as if we were writing it a letter – Dear Love, – felt really candid and appropriate.

You released your debut EP on February 6. How has the response from fans been?

DR: The response to our debut EP has been wonderful. We’re very lucky to have a really supportive group of fans, all who go above and beyond to help us promote its release, and get the Dear Love name out to more ears.

When writing songs, what is your writing process like?

DR: Typically, I’ll sculpt the basis of a song; its generally melody, vocal line and lyrics, then hand it off to Shane, Marty and Mike so they can add all of their technical brilliance and arrangement ideas into the pot.

From the six songs on the EP, which has the most meaning to you?

DR: It’s hard to say really. They all sprouted from such different seeds of inspiration, and therefore there’s such a spectrum of emotions present over the course of the record. If I had to narrow it down – Sick With The Same Thing is a standout for me, and I think we captured a rawness on Stop Me particularly well too.

What song is your favourite to play live?

DR: Don’t Miss The Brakes is one of my favourite songs to perform live. It’s the first track we ever put out, and our fans responded so amazingly to it. Whenever we perform it live, people have come to sing along with every word. It’s really exciting as a songwriter to see that people even know the words, let alone want to sing along at your show.

I can’t get enough of Sick With The Same Thing, can you tell me more about this song?

DR: I don’t like to say too much about the lyrical content, cause one of my favourite things to do growing up would be to listen along to songs, album booklet in hand, trying to understand the meaning behind each and every line. I’ve always appreciated some vagueness in poetry, as it really leaves a lot of avenues open for listeners to make their own connections and parallels to the subject matter. That said, SWTST is essentially a story of two broken individuals going to extremes to make something between them work, when perhaps it just fundamentally does not.

Are you planning a tour anytime soon?

DR: We definitely want to start performing outside of Toronto, as we’ve had a number of incredibly fun shows here already – so we’re working on that right now. However, it’s tough to say when we’ll be able to do a full-on tour. Being an independent band, it’s difficult to finance a tour straight away, so we’re especially focused on growing our base of support far and wide, so something like that can be possible even sooner. We’re really privileged to have fans from all over Canada and the US (and the world, even!), so to be able to take our music right to them, and meet them all face-to-face, would be a dream come true.

You are a relatively new band, but I see you have a dedicated following. Have you had any memorable fan experiences?

DR: At our most recent show, a very dedicated fan came all the way from Florida to Toronto to attend our show – so that was extremely flattering. We’ve also had tons of fans create their own Dear Love artwork, apparel, fan blogs, and more. It’s all been so humbling!

What’s next for Dear Love?

DR: We’re continuing to promote our EP as much as possible, and we’ll be working to organize more shows over the coming year – in and outside of Toronto. We’ve got some surprises that we’re working on over the future weeks and months, but we don’t wanna say too much just yet!

As per usual at Canadian Beats, we like to include a portion of random questions that may help your fans get to know you better, and of course it’s fun, so why wouldn’t we do it? So here goes:

What areas of Nova Scotia are the three Nova Scotian bandmates from? How did you meet up with Shane?

DR: Mart, Mike and I are from just outside of Halifax, Nova Scotia. When I first moved to Toronto, I was looking around for musicians to work with, and happened to answer a wanted ad that Shane’s prior band had posted in search of a vocalist. I auditioned well, joined the team and eventually, after a few member changes, the project became what is now Dear Love. Over the course of its growth, we invited my long-time musical collaborator, Marty Doyle, to be part of the group, and eventually our friend Mike made the journey to Toronto to be a part of the team as well.

Canadian Beats is all about Canadian music, so who are your favourite Canadian bands/artists?

DR: Growing up, Matthew Good and Our Lady Peace were two of my biggest Canadian influences as a songwriter.

What is your all time favourite song to cover?

DR: Mart and I had been covering “Pardon Me” by Incubus in our prior, Halifax-based band for many years. Shane and Mike learned the tune recently and we were able to play it at our last Dear Love show. That tune, and Incubus as a band, have also played a really big role in how I developed as a musician. I actually taught myself to sing watching Incubus concert DVDs and emulating Brandon Boyd – not that I’m anywhere near his level yet lol.

DR: The first album I ever bought was Our Lady Peace’s “Clumsy”.

DR: Both are important for us to keep in touch with our fans, so we’re present on both platforms all the time:

DR: Thank you all SO much for the support you’ve shown so far. As an indie act, our dedicated fans are going to be the ones who help us reach more and more people. We hope you’ll help us continue to promote our EP and Dear Love to everyone you meet. Also, feel free to chat with us online as often as possible – we love hearing from all of you, and try to touch base with everyone!