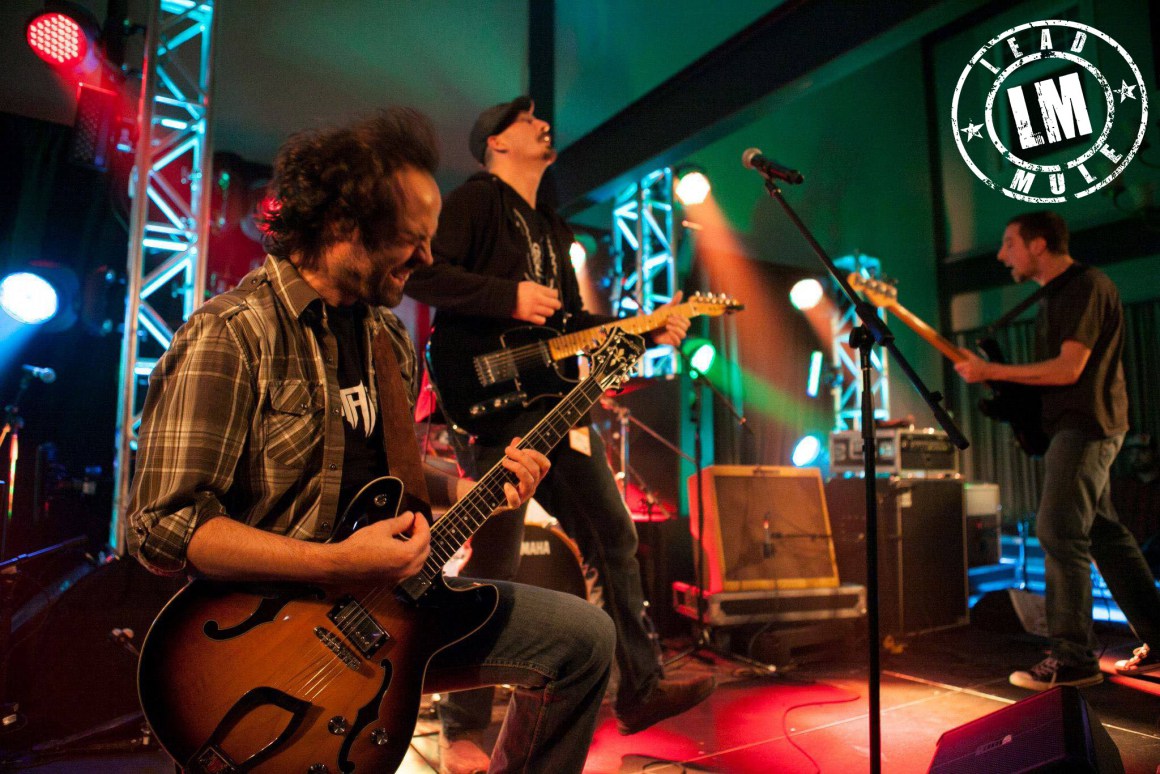 Lead Mule is a 4 piece rock band from Yarmouth, NS. The band consists of Mat Bridgeo, Marc Durkee, Travis Darby & Sandy Ackles. Lead Mule released their self-titled debut EP in January of 2013, featuring five expertly written and performed songs. I had the chance to conduct an email interview with Mat about their background, their sound and their future. Keep reading to find out more.

MB: When keyboards and glam rock were popular, if you really want to throwback though it would’ve been when I was about 8 year old trying to learn Christmas songs on organs and pianos at Grinny’s house.

When was Lead Mule formed? How was the band formed?

MB: Lead Mule started off as “Dress Code Casual” in 2011 and turned into Lead Mule in 2012. Basically it started in part by our bass player (Marc Durkee) telling me to get off my ass to write songs again and offering to be part of my “band” if I decided to start one up again. I had been on a bit of hiatus prior to Lead Mule. The name Lead Mule actually comes from a camp I had built back in 95 or something that ended up becoming somewhat of a venue of sorts and later burnt down but that’s another story for another time. http://www.youtube.com/watch?v=Swc4305WQ2s

Lead Mule released their debut EP in January 2013, how has the response been?

MB: The response has been quite positive from what I can see anyway. We pushed “Third Degree” as our single but I found “Sunporch” seemed to do well among reviewers. I have also been told a few times that the $5 asking price is too cheap for our album so I suppose that’s a good thing.

You were nominated for 2013 MNS Rock recording of the year for the EP, how did that feel?

MB: Badass, I’ve never been nominated for anything before. Very grateful.

When writing song, what inspires you?

MB: Really awesome stuff and really shitty stuff, “stuff” being life. Nothing in between really motivates me. If I’m super happy and pumped, a song idea will probably hit me when I least expect it, if I’m really pissed off/sad at something going on in the world that I have no control over, I’ll wine and fuss about it in a song.

From the EP, what song is your favourite to perform live?

I saw you perform at the Rodd Grand Convention Centre on April 18, I really enjoyed your set, and especially liked the new song, “All The Time”, when can we expect a new album?

MB: Thanks, that’s much appreciated! We’re actually going into the studio to record a full length here in May and aiming to have it out sometime this year.

When can fans see Lead Mule perform live next?

MB: We’re playing a show at Michael’s in Halifax on Saturday, May 3rd.

On top of Lead Mule, you are in the band “The 742s”, how do you make time for more than one band?

MB: That would be a question to ask Marc, he’s been juggling 5+ bands at any given time pretty successfully from what I can see. As for me, I find the more you play, the easier it is to play period regardless of what style of music your’e playing, it just keeps you practiced and on your toes, so taking on the odd project here and there isn’t really as hard as it sounds at first. We’ve got a pretty close-knit music community around here so it’s pretty common for us to share roles in each other’s bands.

Besides these two, are you currently in any other bands?

MB: Yes actually, I play bass for singer/songwriter Crystal Porter, she’s got some pretty neat tunes and the pipes to sing em.  There’s my solo stuff but I haven’t dabbled much in that lately as most of my focus has been on this band these days and if I write a song, I’ll just end up showing the band so we can make a Lead Mule song out of it. I’ve also filled in on vocals and bass a few times for them Ambrose boys at some pretty kick-ass shows.

Canadian Beats is all about Canadian music, so who are some of your favourite Canadian bands/ artists?

MB: Stanfields, ROSA, Matt Mays, Sam Roberts, Stompin Tom and everything in between. I love Canadian music , more so now than I ever have. I find it seems like we’re going though another one of those shifts in music where people are craving something “real” again. Right now we’re living in a world saturated with bubble gum, auto tune and other fake trendy pretentious fads kinda like the the late 80’s when people were getting sick of the glam. Canadian Music is as real as it gets.

Do you find social networking to be an important part of the music industry these days? Do you take full advantage of the free advertising?

MB: Oh indeed I do, I spam that shit all day, but honestly I find it hard to stay ahead of the curb sometimes, it seems as if there’s always the “newest, bestest” thing just around the corner and just as you feel comfortable with the format of one platform, it becomes irrelevant and changes. You can’t always rely on what your’e comfortable with but rather what everyone else prefers using, otherwise you’re limiting your potential target audience. The fact that I’m still using hotmail is a perfect example of something I really need to move on from, like the day before yesterday.

Here at Canadian Beats, we always like to include a “fun” segment to our interviews, so here goes:

MB: “All come all ye children”  5 years old, in church, on stage, by myself, in front of a capacity crowd of old ladies.

MB: Metallica in HFX for the “Wherever I May Roam” tour.

If you were putting together a show, which bands would accompany Lead Mule?

MB: Oh frig, that’s a toughy. Right now we’re happy to accompany any hard working musicians on stage as long as they aren’t dicks and even then, we ‘d probably still try our best to put up with em.

If you were not pursuing music, what do you think you’d be doing?

MB: Carpentry , see I like to pursue things I enjoy and that don’t make much money, right now there’s not much money in music nor carpentry unless you live out west I suppose. Sometimes I think it’d be fun to be part of a sketch comedy outfit of sorts.

MB: Thanks for taking the time to read my long-winded babble-brook responses!