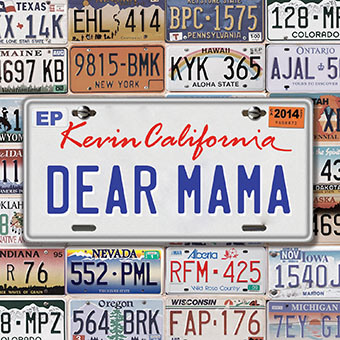 Kevin California is an indie/folk artist who was born in Canada, but now resides in Venice Beach. Kevin has just released his debut album, “Dear Mama”, but on top of that found out that his sister’s cancer had returned. Since finding out this news, he has set up a site for donations to get his sister, her son & husband to Disneyland to create happy memories, for information on that, as well as to learn more about this talented artist, continue reading the interview I conducted.

You are Canadian born, but now live in California, was that decision made in regards to where you thought music would be better to pursue?

KC: To tell you the truth, for the last 7 or 8 years all I have done is followed my heart. I left Ontario to Australia and New Zealand after college to fulfill my childhood dream of living somewhere warm. After realizing it was too far from family and friends, I headed back home. Accepting that I was gonna have to live through the Canadian winters I decided to pick up a sport that would help me enjoy it. So I began snowboarding. Soon after realizing that the biggest mountains in Canada are out west I decided that I would get on the road and as I told my mom at the time, “I don’t know why I am moving away, all I know is that I am going to finds oceans and mountains”. After landing in BC, I was asked by a fellow coworker to jam and before I knew it I was in a live performing jam band and hosting open mics. Recognizing the course of events that were happening to me I knew that music was my destiny and if I were to pursue it to the level I had always dreamed of I would have to move to the mecca of music recording, Los Angeles. In short, as long as I could remember I dreamed of being a rockstar and living somewhere warm. California seemed to make sense.

You released “Dear Mama EP” on April 22, how has the response been?

KC: I have received a lot of positive response regarding the EP. What’s interesting is that the people closest to me, family and friends, want to know what inspired the songs, what was I thinking, was I sad, happy, what were the circumstances around the lyrics, are they about a girl in particular. I guess the hardest part about being an artist is that you have to open your chest and expose your heart for the whole world, including the ones that you know personally.

You are raising money for your sister, who recently found out that her cancer has returned, your goal is to reach $6000 dollars so that your sister, her son and husband can visit Disneyland, how far are you from reaching your goal?

KC: I am quite far from reaching my goal. The initiative has just officially begun. Unfortunately, time is of the essence as the near future is unpredictable for my sister. I really hope to reach the goal soon to give my sister and her family the fun they deserve in this trying time, all the while, inspiring those donating to this cause the importance of 1) family and 2) living live to the fullest (or as my parents said once in regards to my free-spirit, life to the foolest. After all, ignorance is bliss :))

Can you tell people how they can go about donating, if they aren’t sure how?

KC: They can go to www.KevinCalifornia.com and click the “donate now” tab.

Out of the four songs on the EP, which has the most meaning to you?

KC: They all mean a lot to me, as every song was written with the utmost honesty. However, I feel  that “Dear Mama” is really special right now as it symbolizes my nephew and his mama, (my sister). Particularly, the second verse, “…words could not tell my story, to a mom that showed me love will live and truly grow”.

When writing songs, what inspires you?

KC: Life. Life inspires me. I take a picture of the things I see around me. Whether I am on a bus, a plane or walking on Venice Beach, I take a snapshot of my surroundings with words and use that as a launching point for my lyrics. The melodic and musical component comes from jamming by myself and playing whatever comes to me. When I hear a sequence of notes that relate to something I’ve written I put them together to make a song.

Can fans expect to see you touring Canada anytime soon?

KC: Yes, definitely. I am working with Tommy Merrill at The Press House to set up tour dates from July through to October. You can except to see some of my shows within the great white north for sure. After all, I never forget my roots.

KC: This is only the beginning. After this summer’s tour I will be in Los Angeles recording a full-length album. Keep an eye out for it as I plan to release it around Spring 2015.