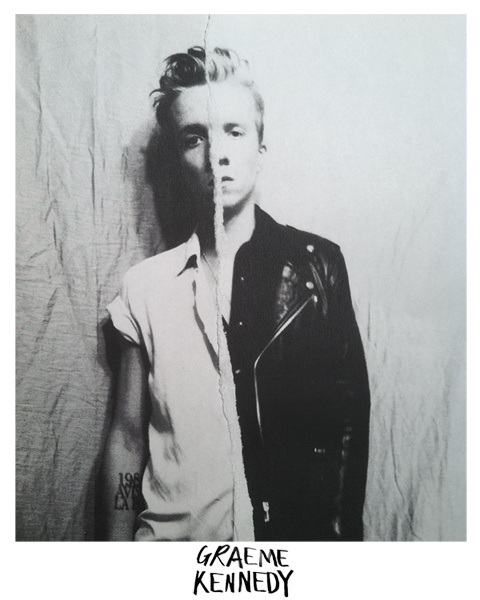 Graeme Kennedy is an independent musician from Peterborough, Ontario. He has released the digital singles, “No Use For People/// Magician With A Trick” as  his debut release, and are available for streaming and free download here: www.graemekennedy.bandcamp.com

The two songs are from his forthcoming debut full-length album, which is produced by Shawn Bradley and mixed by Jon Drew.

If you are interested in finding out more about this talented singer/songwriter, this is your chance. We have had the opportunity to conduct an email interview with him. Want more? Check out his upcoming shows: April 23 at The Spill in Peterborough and April 25th at Pressed in Ottawa.

When did you start songwriting and performing?

GK: When I was nine years old I wrote a song about Sampson and Delilah that began with the line, “There once was a man as big as a barge”, and the rest is history. I started playing real gigs when I was sixteen.

Who has been your musical influence?

GK: I steal a little bit from a lot of people – that way I won’t get caught.

Do you come from a musical family?

GK: Yes, we can all sing and play something, some of us do so more often than others, but if we all lost our jobs we could hack it as a travelling family band.

When writing a song, what influcences you?

GK: The lyrics have the greatest influence on how my songs form. The melody, rhythm, and musical arrangement come about differently depending on what I have to say and how I want to say it.

Can you describe your songwriting process to us?

GK: I don’t think I have a consistent process. I’m too dishevelled to remember how I wrote the last one when I’m trying to write the next one. There is usually a lot of repetition involved, and I tend to write melodies in this strange, whispery falsetto voice that no one should ever hear. Sometimes it takes me fifteen minutes, sometimes a month. I try not to think about it.

You recently released your digital single/ video for No Use For People /// Magician with a Trick, why did you decide to release for free download, instead of a paid download?

GK: I wanted people to give it a chance before I ask them to pay for a full record. It’s hard enough getting people to click their mouse, it seemed best not to involve money right off the hop. Plus the option is there to pay if you want.

GK: The response has been positively modest, and modestly positive.

You are going to be releasing your debut full-length album in the near future, can you give us any details on that?

GK: I can’t confirm a release date at the moment, but I’ll be posting new content and updates on my website, so check in there to keep in the loop. www.graemekennedymusic.com

GK:  Fans can expect five things from the album:

1. Nine songs played in a minimalist rock and roll fashion

2. A record that suits a Saturday night and a Sunday morning.

3. A little bit of glam for the working man.

What has been your fondest musical memory up until now?

GK: My good friend and former bandmate, Jeremy Boyd, sang ‘He Giveth More Grace’ at my grandmother’s funeral. It was beautiful. But a few years later he played it again, in a van parked in the corner of a truck-stop parking lot somewhere in Quebec. We were a couple whiskey’s in on the first night of a tour, and he sang it so it gave me shivers. It’s a fine memory indeed.

We always like to include a “fun” portion in our interviews, so here goes.

Canadian Beats is all about Canadian music, who is your favourite Canadian band and/or artist?

GK: My brother’s band, Kennedy Cult are top of the pack for me. I don’t give a shit if he’s my brother, he is writing amazing songs and singing the shit out of them. And the band is sexy and groovy and dark. The live show is understated and seamless. They’re the real deal.

If you could go on tour with any other band/ artist, which would you choose? Why?

GK: Mick Davis. Mick is the singer of The Novaks, who I think must be the best rock and roll band in the country, but he also releases solo songs online, and they’re classics. Someday we’re going to steal a car and drive off to catch a dream, armed with a couple of combs and a set of .10 to .58’s.