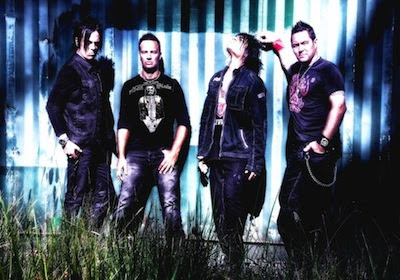 Darkhorse, a country rock band from Vancouver are gearing up to release their debut full length album Let It Ride on April 29th. We had the chance to talk to lead singer, Paul Laine about their album and release party. Check it out below.

For someone who doesn’t know Darkhorse, what would you tell them to convince them to listen to your band?

DH: First of all I’m a firm believer if your music is good enough the music does the talking for you. That being said, If big anthemic style songs are your deal than DarkHorse is right up your alley. Some people say its like Keith Urban and Rascal Flatts got in a car crash with Bon Jovi, I’m okay with that.

Your debut full length album, Let It Ride, is set to release through Fuel The Jet Records on April 29th. What can fans expect from the album?

DH: The record is story driven. Our influences album-wise,range from Springsteen’s “Born To Run” to Bob Seger, The Eagles, Lady Antebellum, Jeffery Steele, Rascal Flatts, Dwight Yoakum,  etc.  It really is a group of songs written about our lives I like to think that anybody could relate to it.

What song from the album are you most proud of and why?

DH: “What She Meant to me”.  We wanted to write a kind of homage if you will, to a band that we felt wrote some of the best songs ever. To write a song that we felt Don Henley or Glen Frey would’ve written. I think we got it as close to right as we could.

Who were your main influences for the album?

DH: Really at the end of the day, the chance to write about your own life, your own feelings.  There’s a lot of love for our hometown’s on this album.  A lot of looking back over the years to our successes and failures. Introspection and evaluating ones life is what causes you to write in the first place and of course from a musical end,t he list is endless.  Some of them we mentioned earlier in the interview..

Any surprises you can let us in on for the album release party on April 27th?

Who would you like to collaborate with in the future?

DH: Oh boy the endless list, would love to write for Keith Urban, Rascal Flatts, Brad Paisley. It would just be fun to sit in a room and hammer it out as it always is

Since we’re all about Canadian bands, who are your favourite bands/artists from Canada?

DH:  Rush, Doc Walker, Shania Twain, Bryan Adams, Leonard Cohen.  I could go on and on

DH: We have the best fans in the world.  To get behind an unknown band, at this stage in the game is an amazing feeling for all of us