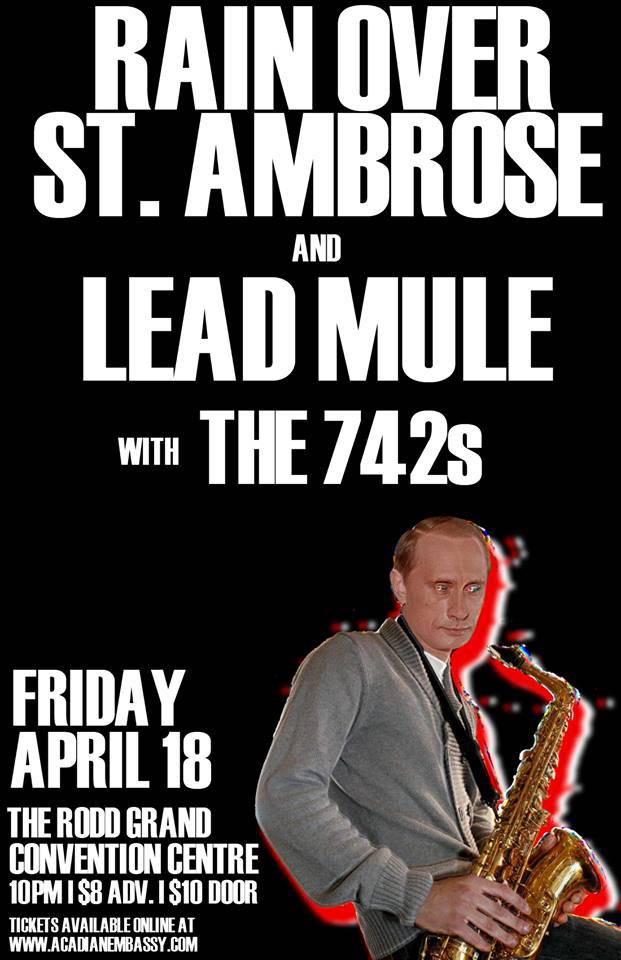 On Friday, April 18th I attended a show at The Rodd Grand Convention Centre in Yarmouth, NS. There were three bands performing at the show, which was put on by Acadian Embassy & Music For Mules.

Opening the show was a new Yarmouth band, “The 742s”, pronounced The Seven Four Two’s, not The Seven Forty Two’s, which they made clear in their introductions. The band features Cody Porter (Vocals/ Guitar), Mathew Bridgeo (Bass), Warren Parnell (Guitar), Travis Darby (Drums). I had never heard of these guys, and was pleasantly surprised by their 5 song set. The crowd loved them and they put on a very energetic show. I especially enjoyed their songs “Old” and “To Dust”. The band currently does not have any social networking pages, but I have been told that it’s coming soon, so be sure to keep an eye out.

Next on the stage was “Lead Mule”, a rock band which was nominated for 2013 MNS Rock recording of the year for their self titled debut. The band consists of Mathew Bridgeo (Vocals/ Guitar), Marc Durkee (Bass/ Vocals), Travis Darby (Drums), Sandy Ackles (Guitar/ Vocals), although on Friday night, Marc was on guitar in Sandy’s place, and Jeremy Surette filled in for Marc on Bass. They played a full set of 11 songs, the crowd soaked it all in, and the band seemed to love every last minute of it. They played their old favourites, as well as some new tunes which we were told “We don’t feel they’re ready, but we are too excited not to play them for you.” That being said, the new songs were brilliant. One of the new songs stuck with me, “All The Time” was one of my favourites from the set and if this is what’s to come from “Lead Mule”, I recommend you all give them a listen, and follow them on their social networking pages, which you can find below.

The final act of of the night was Rain Over St. Ambrose, a rock band also from Yarmouth featuring Cory LeBlanc (Vocals/ Guitar), Marc Durkee (Bass/ Vocals), Curt LeBlanc (Guitar), Luke Amirault (Drums), and Matt Amirault (Keys/ Vocals). They got on stage at almost 1pm, but that didn’t stop the crowd’s excitement. The band, dressed in red articles of clothing, wasted no time and got right into their set. The crowd flocked to the stage as they played a great mixture of new and old songs. When they played “Play The Night”, you could see the crowd getting into in, dancing and singing along. After seeing this band on stage, you know how much they love what they do and you can see why they have been showcased at the East Coast Music Awards, Nova Scotia Music Week, Canadian Music Week and Halifax Pop Explosion.

As I was leaving, I picked up both Rain Over St. Ambrose and Lead Mule’s albums, excited to hear the songs again. I recommend all three of these bands to you if you like rock music, and if you have a chance to see any of them live, go. You won’t regret it.