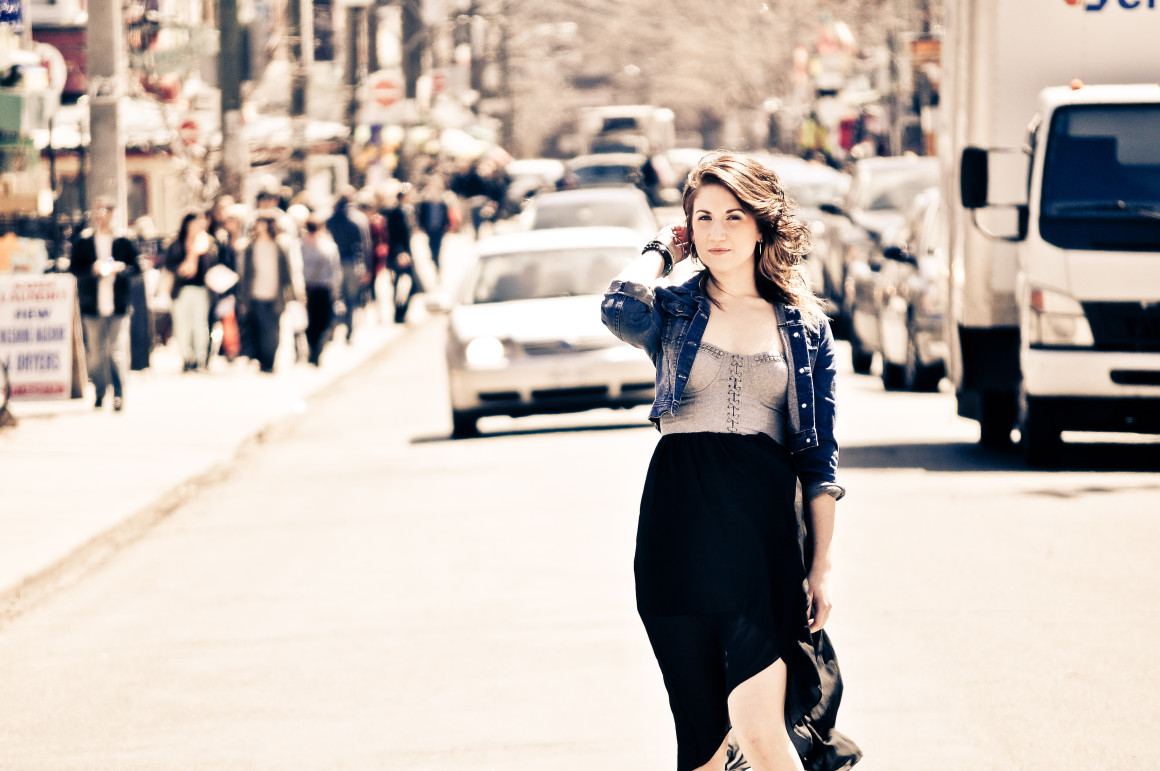 Ontario county singer-songwriter Nicole Rayy released her debut EP, ‘Only Everything’, in July of 2013. She was also named the winner of the Emerging Artist Showdown on Kamloops station, Country 103, as well as a nominee in the Country Music Association of Ontario awards for female artist and single of the year for her song “She Don’t Know That Much”. Her song “Baby You Just Know” was also on a list for the semi-finalists in the 2012 International Song Writing Competition.

Want to know more about Nicole? Be sure to check out her social media and links to her music below, as well as continue to read this interview.

You said that it was hard on your parents when you decided to leave university to pursue music, has that changed at all now that you’ve released your EP?

NR: Yes, I think they have definitely adjusted to the idea. They have always been supportive of me and I know any concerns they have are because they just want what is best for me. They are proud of how far I’ve come with my music and I know they hope I will have continued success following my dream.

NR: It has always been my dream. As a little girl my answer to the question, “what do you want to be when you grow up?” has always been “a singer”. When I got older I thought my answer might change, but it never has. Music is my passion and I knew in order to be happy I had to follow that passion.

NR: Mostly, my life experiences. Sometimes I like to challenge myself and write about things I don’t really understand, but I’ve always found that writing about the things I know and the things I’m feeling, makes a better song. Listening to my songs is like watching my life unfold.

NR: Usually the melody. Most of the time I have an idea of what the lyrics will be, but in order to get them right I need a melody first. It’s easier for me to fit the words into a melody then the other way around.

NR: That is a question I always have trouble answering. Not only because there are so many talented artists, but because what I’m listening to and what music inspires me is always changing. Right now, I would really love to sit down with Kacey Musgraves and write a song. Her lyrics speak to me; sometimes I hear something she wrote and I’m like that’s exactly what I’ve always wanted to say in a song.

What is it like starting out as a new Canadian musician?

NR: I won’t lie it is tough. When I was in high school singing in the talent shows or school musicals people were always encouraging me and telling me I would ‘make it’ one day. Now that I’m in the real world trying to make music my career and there are so many talented artists trying to do the same thing, it’s impossible not to get discouraged sometimes. I try to always remember how far I’ve come and not how far away I am from my goals. Music is my life and I have to believe that things will work out; if I don’t believe in myself who will?

NR: It gets said a lot, but it really is the best advice, don’t give up. Every artist out there, even the big stars have been rejected at one point. If you truly believe you were meant to be a musician, a singer, a songwriting then you will be. You have to just keep going even when people tell you no.

What is your favourite song off of the album?

NR: My favourite has always been Still See Blue Skies. I didn’t write that song to be a radio hit; I wrote it to be honest and to help me heal when I was going through a tough situation. I sat down to write it and it came out just how I wanted it to. I think people can appreciate the rawness of it when they hear it.

NR: I’d say come over to my house and I will sit down at my piano and play for you. After that they will know exactly how I sound because just me and my instrument gives people the most raw and honest impression of me. Going back to what I said about Still See Blue Skies, that is what I would have them listen to first. I think it gives them a taste of my sound, which I would say is singer-songwriter country-pop. I’ve always found that it’s hard to describe myself as one genre because I incorporate many styles into my music. Also, I don’t usually compare myself to other artists because there is already one of them and I don’t want to sound like them, I want to sound like me.

NR: Well I have lots of shows coming up this summer, which I am very excited about. It’s always nice to play new shows and festivals I’ve never played before and make new friends and fans. Also, I am excited to say that I am going on a tour across Canada this August with fellow country artist Billy J White. I can’t give too much away on that yet, but I will be announcing more on that soon.

NR: Oh man, that’s tough. I would have to say as a baby listening to Sharon, Louis and Bram music. I couldn’t tell you the exact song. As a young girl I definitely blasted a lot of Spice Girls music wherever I went.

NR: Eating dessert of pretty much any kind, I have a major sweet tooth. Oh and watching every episode of Friends about a million times. I could probably recite all the lines.

NR: I hate to admit it, but I’m not a huge reader; I wish I read more. My favourite would probably have to be the Georgia Nicolson series. There are 10 books in the series and I started reading them when I was a young teen. They are really easy reads and nothing to elaborate happens, but they are HILARIOUS! I kept reading them because they were such a good laugh.

NR: Black! Everyone tells me that black doesn’t count as a real colour, but it is my favourite. Most of my outfits contain a lot of black. I think its classy and you can always dress up black with pops of colour, which right now is my purple hair.

NR: I’m not even sure why, but Play That Funky Music by Wild Cherry. It’s a fun song that most people know and it’s got some belting notes, which are my favourite.

NR: I’ll say water, food and I’m going to be that person and say my phone so I can call someone and tell them I’m stranded haha. Also, so I can listen to music on my phone till somebody comes to rescue me.

NR: Well it may be bias since we are touring together and he is one of my favourite people, but Billy J White. He has true talent and great songs! If you like country music you will fall in love with him. There are so many other talented Canadians bands and artists I love and recommend including:  Michaela Clarke, Carli and Julie Kennedy, Irene Torres and the Sugar Devils and Jacelyn Holmes just to name a few.

NR: I really want to go to Greece! Some of my friends have been and it just looks so gorgeous so I am dying to visit myself. Also, Italy is another one on my list. My parents took a trip there a few years ago and they just loved it so I think I would too. Finally, Australia; I mean who doesn’t want to travel there! As long as I don’t run into any huge spiders; I would be terrified. I think it would be a wonderful adventure.

NR: I got asked this recently and I wasn’t sure what would surprise fans the most, but I answered that I used to be a competitive Irish dancer. When I was younger I used to compete all over Ontario and I’ve got many medals to prove it in my room at my parent’s house.

NR: Such a tough question, probably Linkin Park. They were my favourite band as a kid, I still love them, and when I finally got to see them in concert I was really excited. Also, I was recently in Nashville and I got to attend the Big Machine Label party. So many talented country artists performed including, Tim McGraw, The Band Perry, Justin Moore, Rascal Flatts and MORE! It was amazing to be able to see all those talented artists perform in one night.

NR: Yes, THANK YOU! Thank you for buying CDs, coming to my shows, sending me notes and supporting me! You make making music the best job in the world! Also, I always want to hear from you guys. If you like a song, you don’t, anything at all, please reach out to me and let me know. I love hearing from you!