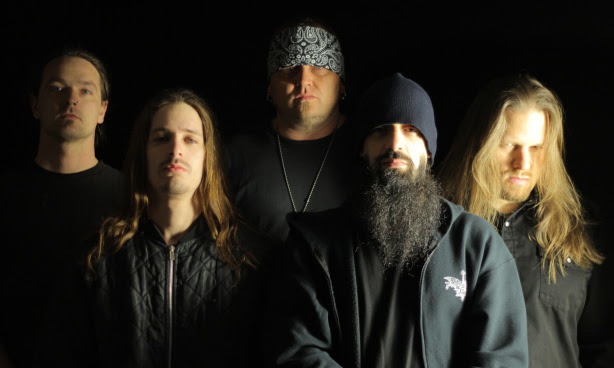 PG: Years ago when I was in another band, during down time, I wanted to do something different from what everybody else was doing, so I decided to do a recording project only own. I wanted to do something a bit different, involving keyboards and other odd sounds, so I recorded an album’s worth of songs. I also wanted to focus mainly on the vocal aspect of it, so I enlisted two of my favourite vocalist friends. One of them being Gillishammer. Years later, we decided that it was the right time to make it a full band, so we enlisted some great musicians that we knew from our music scene.

Where did you come up with the name for the band?

PG: Everything we do has multiple meanings, and we like to use symbolism and metaphors in an artistic way. We wanted a band name that would make you think about it, and wonder what it meant. We also wanted to be original because there is a million bands with typical names, and it just seems pointless to willingly become a clone. One of the meanings deals with the way the media cultivates social behaviour. The news, for instance, is created to instil fear into the hearts and minds of the public. This is used as a tool to control them. We deal with a lot of social/psychological topics, and religion.

How does Hymnosis differ from your previous music?

PG: “Hymnosis” has more writing contributions from the other band members than the previous albums, so it has more dynamics and different influences involved.

Where does the inspiration come from for Hymnosis?

PG: The inspiration comes from the trials and tribulations of daily life. Our songs deal with religious and political hypocrisy, human behaviour, society’s ills, etc. Plus we love to create and perform heavy music because to us it is cathartic.

Is it usually one person who writes the lyrics, or is it a team effort?

PG: All the lyrics are written by myself (Chuck) and Gillishammer.

Are there plans for any touring in the works?

You have been said to blend Doom and Black Metal together. Can you please explain this more?

PG: We used to have a keyboard player, so we had more of the atmospheric Black Metal tones going on, plus Gillishammer’s vocal delivery has BM characteristics to it. We write a lot of lyrics about religion, so there’s that too. We do not have a keyboard player anymore, so we have shifted more towards Doom/Death style. Since we come from the old school of Death Metal, we’ve always had those DM elements in our music. Our albums always have 9 songs, at least three are usually slow and heavy, and at least three are fast and heavy. Our vocals are mainly in the Death Metal style of delivery. My vocals especially, whereas Gillishammer adds a Black Metal type of feel to it. We both do spoken word or chanting parts too.

How would you describe your music to new fans?

PG: Our music is influenced by a lot of different eras of Metal. We appreciate the nuances which have developed over the years, and we wanted to create our own niche. It’s like pruning a branch from the Black Sabbath tree and growing a new breed. We respect the originators, yet we don’t want to copy anyone directly, so we do things our own way. I’d also say we sound like a big death machine with many gears and moving parts which mows down all in its path.

We like to throw in some fun questions for the fans, just to get to know you better.

What do you usually take on pizzas?

Describe your fanbase in 3 words.

What can we catch you doing if you’re not on tour or making music?

PG: Some of us like to chill with our friends and family when we get the chance, but there are a lot of things that need to be taken care of to keep a band functional while not on tour or writing music. I know for myself, there is no rest because I produce the albums and do all the artwork, so that keeps me very busy. I also sing in another band. Andrew (lead guitar) keeps himself busy with making videos and dealing with most of the band’s business.

Who in the band would you say is the messiest?

PG: I think we are all fairly messy because we are of the “artistic mindset”, but if I had to choose one, hmmmm?

PG: I would like to say hello and thanks to everyone who supports us because without them, we would not be able to perform live shows. To us, playing live is a spiritual event, so it’s very important.