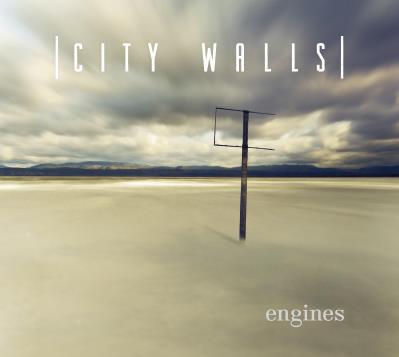 “City Walls” is a Vancouver based rock band consisting of members Nate Parsons, Brian Welsh and brothers Paul and Tony Lambert. They released their debut EP in 2010 and are now getting ready to release their full length album “Engines.” It is their first release since changing their name from Louder than Love to City Walls and features 11 songs, reaching a playing time of 39 minutes and 51 seconds. “Trapped” is the first single from the album and will be available on iTunes on March 11. The band is getting ready to go on tour to promote the album and will be going across the country starting on March 13.

Can I just say that I love this album? It’s got an amazing rock vibe and the lyrics sound very thought out and meaningful. Each song sounds like it has its own purpose; not like a bunch of words were thrown together in the hopes that a song could come out of it. The album has a very mature sound to it, artistically speaking, and is a big step up from their EP. Good music like this is hard to come by these days, but “Engines” rises to the occasion in every way possible.

The voice of lead singer and guitarist Paul Lambert is a perfect match with the music and he delivers the lyrics perfectly. Melodically, the album reaches into the rock genre, but it also pulls out and can have a softer tone as well. “Higher” is one of my personal favourites and really shows off Paul’s vocal range. I love hearing singers push themselves to reach new heights in their musical ability and Paul showcases that with his voice in this song.

I’m a sucker for a good harmony, and harmonies do make a few appearances. The songs are not harmony heavy, but, when they do show up, they hit hard and really make an impact. It shows that a lot of thought was put into their placement to create the biggest impact on the listener based on the lyrics being sung and the direction of the song.

An interesting thing about this album is that it is mainly rock, but it pushes those boundaries a bit. Sometimes it leans into a southern-rock style, which keeps the songs different and allows each song its own sound. No two songs on “Engines” sounds identical, which makes each of them stick in your memory and keeps the listener’s attention.

Overall, “Engines” has a great sound, as well as a diversity in sound while still staying true to the City Walls sound, has meaningful lyrics, and melodies that you are sure to catch yourself singing long after listening to them. I must say, it is one of the best albums I have heard this year.