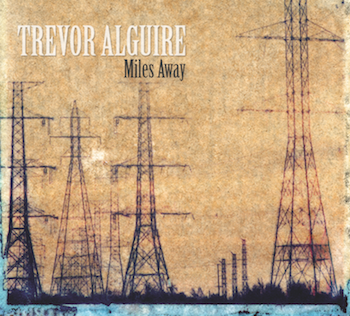 Trevor Alguire is an Ontario based singer/ songwriter who is about to release his fifth studio album, which is entitled “Miles Away”. The album has been produced by Jason Jakunas at Metroplitan Studios in Ottawa. The unique thing about this album is that it was recorded live off the floor, with very minimal additional instrumentation, in the hopes that it would capture the spirit of one of Trevor’s live shows. I would say that they pulled this off flawlessly. On top of the album release, Alguire will kick off a string of Canadian Tour dates with an Album Release show at The Avalon Studio in Ottawa on April 26. For a full list of tour dates, visit his website: http://trevoralguire.com/tour-dates/

The title track, “Miles Away” has a very country flair to it, which being brought up on country, I immediately loved. It’s one of those songs that would suit any mood or atmosphere. I can see that this song will gain a lot of positive reactions for Trevor.

“Long Gone Away” is another example of a song that I could see becoming a hit on country radio, and among country fans. That being said, I don’t think that Trevor should be pigeon-holed into the country music genre, as he pulls from other genres, such as folk, which go perfectly together. The lyrics in this song are a great example of a perfectly written song, it keeps your attention and makes you want to know more about the writing process behind it. Any artist that can cause you to wonder more about their background, or writing style, is doing something right, in my opinion.

The final song that I feel the need to tell you about, is the seventh song, “Rusty Old Strings”. This song has a very “classic” country sound that I’m sure would appeal to the older generation, but still has the ability to appeal to the younger generation of country fans, as any well written song can appeal to more than one group of music fans.

I would say that this album is an impressive example of skilled songwriter and Trevor obviously possesses the talent to pull people into a song with expertly written and performed tracks.